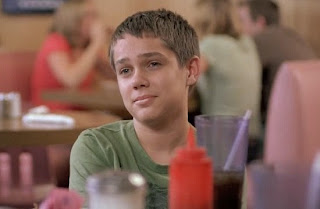 I remember hearing about Richard Linklater's ambitious plan to film a movie over the course of a decade, allowing the actors to age naturally on screen as the story is being told, shortly before it started filming back in 2002 and thinking that it sounded like an incredibly interesting idea, but wondering how he would get around the gimmick inherent in the premise. The answer, as it turns out, was to make the film as if there is no gimmick at all, allowing each segment to exist within its own time without having those points in time become in any way the focal point. Boyhood is not a series of snapshots about what life was like in 2002 and then 2003 and then 2004, etc.; instead it manages to capture the rhythm of the steady flow of time as we grow and change during its course, ensuring that the story feels whole rather than like a series of pieces put together. Boyhood is a film that not every filmmaker could have pulled off with such grace, and Linklater makes it look and feel effortless. This movie is a masterpiece, plain and simple.

Starting in 2002 and spanning the next 12 years, Boyhood is about Mason Evans, Jr. (Ellar Coltrane) as he ages from 6 to 18, starting with him in first grade and ending with him going to college. There isn't a ton of plot beyond that: the years pass, Mason grows up, endures the usual physical changes that that entails, and tries to figure out who he wants to be, what he wants to do, and how he fits into the world. In the process many people come and then go from his life, including friends, girlfriends, step-siblings, and step-parents, while others remain fixtures, such as his older sister Samantha (Lorelei Linklater), mom Olivia (Patricia Arquette), and, to a lesser extent, his dad Mason Sr. (Ethan Hawke). As the film opens Mason Sr. has been absent for some time, vaguely referred to as being "in Alaska," and Olivia is struggling to improve the situation for herself and the kids, necessitating a move to Houston (the first of many moves she and the children will make) where Olivia intends to return to school and will have the support of her mother. Later Mason Sr. drops back into the picture, becomes a more semi-regular presence in the kids' lives and tries to make up for the amount of time he's been absent by packing as much "parenting" into his time with them as possible by having lots of big talks with them. The "big moments," the milestones that Olivia will tearfully list off as she laments that she thought there'd be "more," are left out of the film, which is precisely the point. Just as the film isn't interested in underscoring the culture signposts that would ground each scene in a specific year - there are musical cues and a few political discussions that give you a sense of what year it is at any given time, but those are background elements more than anything else - it isn't interested in measuring its characters according to the moments culturally deemed to be "important." Boyhood is about capturing the feeling of living time, rather than marking it, and in this sense it does contain the "more" that Olivia thinks she's missed, she just can't see that because it's happened so gradually for her that it's been rendered invisible.

In keeping with its attempt to allow the story to progress according to a more passive and natural sense of time moving forward, rather than in accordance with an active attempt to collect specific moments, Boyhood can be said to be generally "plotless," save for the section which takes place during the years of Olivia's first marriage. During that section Olivia marries a man with two children of his own who, over the course of a couple of years, gives himself over completely to alcoholism and becomes the sort of verbally and physically abusive person that leaves everyone around them feeling as if they are constantly walking on egg shells. This part of the film is the weakest, leading to the only moments in Boyhood which feel overtly like "movie moments" created by plot necessity rather than the slice of life, character driven sequences that surround it, but it also highlights one of the more interesting aspects of the project as a whole. When we watch Boyhood, we aren't just watching Mason grow up on screen, we're also watching how Linklater as a filmmaker changes over the course of the 12 years that he spent making the film. By my reckoning, this section would have been filmed around the time that Linklater was making some of his less celebrated works of the '00s like Bad News Bears and Fast Food Nation and before he got back into the creative groove that would allow him to end the last decade, and begin this one, in such high esteem. There's a heavy-handedness to this section that doesn't exist elsewhere in the film, and it features the only point at which Linklater breaks from Mason's point-of-view, in which we are shown only what Mason sees, when he includes a shot of the step-father hiding alcohol in the house. Later on Linklater will revisit idea of an alcoholic step-father with Olivia's second husband, approaching it in a more subtle way and as if using it as an opportunity to correct the way it had been handled previously (it's sort of telling, though, that in both this film and Before Midnight Linklater has used alcoholism as a means of demarcate the "bad" guy in relationships).

For the most part, though, the hands of the filmmaker in terms of shaping the story are made to seem invisible insofar as there aren't plot points which take the story from one place to another. The film grows and moves along with its protagonist and the world grows and changes in the background. When Linklater started this project in 2002, he couldn't have known what the world would look like by the time he was finished, what pieces of pop culture would prove to stand the test of time, what news stories and events would permanently change the cultural landscape. In this way there is no ironic distance between the film and what it is depicting - Boyhood does not know, when Mason Sr. takes the kids to a baseball game and is full of praise for Roger Clemens, that Clemens will find his legacy tarnished by steroid allegations, nor does the film know when it has characters bask in the fawning optimism of the idea of an Obama Presidency how quickly the "Hope" message would begin to erode under the strain of partisan politics - which gives the film a greater feeling of investment in its time period. It isn't looking at these things from a distance, winking at the audience and saying, "Can you believe we ever believed this or thought this was cool?" It's directly in the middle of it, saying, "This is our here and now and this is where we're at." As you watch Boyhood, you get a feeling of relieving, to a small degree, that period of time yourself, which is perhaps why the film feels so immediately resonant. It's specifically a film about Mason Jr. and his family, but it's generally about all of us, collectively, who have lived through that period in history.

Boyhood is a moving piece of work that manages to tell multiple stories even as it appears to do little more than stand back and observe. It's a story about a boy growing up, struggling to understand and come to terms with the things he has no power to change, and trying to figure out where he wants to go in life. It's also a story about his parents, about a mother who tries to provide the kind of life and stability she wants for her kids, who makes several gains and losses in that respect, who has personal triumphs and failures, who struggles just as her children do to deal with the ebbs and flows of life; and about a father who was unprepared for the role at first but slowly matured into it (though he never matures so much that he can resist the chance to do a bit of shit talking about the ex who did all the heavy lifting with the kids while he enjoyed the luxury of taking time to "find" himself) and who manages to bring something of value to his children's lives even while playing a reduced role therein. It's about how sometimes people come into your life and then disappear from it, how sometimes they disappear and then reappear later, how you can't predict how your life will look 12 years later (or even sometimes one year later), who will still be in it, and the direction you'll be heading in. Boyhood is a story about life, a film which manages to take on an incredible scope while never feeling like anything more than a small, intimate project. I expect that by the end of the year, Boyhood will appear on a lot of "Best of 2014" lists (including, likely, my own), but it almost feels reductive to say that it's one of the best films of a year. This is one of the best films of the years from 2002 to 2014.
Posted by Norma Desmond at 8:00 AM