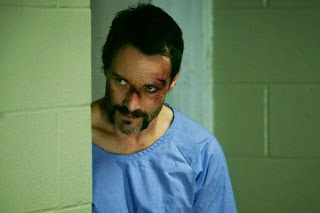 Jason Lapeyre's claustrophobic thriller Cold Blooded is a movie that is not messing around. When the villain here holds a saw to someone, it's no bluff. There will be blood, there will be body parts strewn about, and there will be a lot of cat and mouse in this stripped down but effective genre movie. Though the low budget nature of the production is fairly self-evident, the film makes the most of the resources that it has, including the abandoned hospital that acts as its setting, and leaves the rest to its fine cast. Cold Blooded is a B-movie through and through with no pretensions to more, but it's full of no frills B-movie pleasures, including a willingness to go to the limit and then step over it.

The film begins with a diamond heist which goes horrifically wrong when one of the robbers is gunned down by the police and the other is beaten into a coma. By the time he comes to, Eddie Cordero (Ryan Robbins), has gained a small degree of fame both for the robbery and the murder of his partner, which the police have pinned on him, and is being guarded around the clock until he's stable enough to be moved to a holding cell. The section of the hospital where he's being treated is abandoned so that he's alone with his current guard, Frances Jane (Zoie Palmer), save for the occasional visit from his doctor (Husein Madhavji), who clashes with Frances over her eagerness to move Cordero as quickly as possible rather than waiting until he's ready. Once they're alone again, Cordero tries to talk Frances into a deal that will allow him to slip out of the hospital and disappear, something he wants desperately both because he doesn't want to go to jail and because he's afraid of what will happen to him once Louis Holland (William MacDonald), the fearsome mastermind of the crime, catches up with him, not just to retrieve the still missing diamonds, but also to exact revenge for the death of the other thief, who was like a son to him.

Holland arrives on the scene quickly, along with one of his flunkies and the jewelry store's inside man, who is nervous and ill-equipped for the things that are about to happen. After blackmailing the doctor by threatening to harm his family, Holland and his men are given access to the closed-off part of the hospital, but their attempt to get to Cordero goes awry when Frances isn't easily subdued. While Cordero disappears down one of the corridors, the two henchmen in hot pursuit, Frances tries to deal with Holland on her own, eventually leading to a scene of horrifying violence that ends with her being left for dead (one of many such instances). In the wake of this attack, Frances finds herself in a position where she needs Cordero as much as Cordero needs her, and the two become reluctant partners in their quest to survive. However, the alliance between Frances and Cordero proves fragile, as she expresses both a repeated willingness to hand him over for the sake of her own survival and as part of her efforts to retrieve something that Holland has taken from her, and an unwillingness to let Cordero simply escape from justice if they manage to get out of the hospital. Of course, with Holland after them, what will happen when they get out of the hospital is actually the least of their problems.

Running at a brisk 95 minutes, Cold Blooded is an effective thriller that moves efficiently from one set-piece scene to another. There is a great deal of violence and bloodshed in the film, but Lapeyre is a skilled enough filmmaker that what we don't see is far more chilling than what the film shows. There's a scene early in the film when a character loses an appendage and, though we see the blood spatter resulting from the act, what makes the scene so horrifying is the way that the film focuses in on the face of the victim as the realization of what is about to happen begins to dawn, and the reaction is one of wide-eyed disbelief and silent, open-mouthed terror. Similarly, later in the film Holland discovers that the doctor has reneged on the deal that they've made and places a call to the men who have been sent to keep tabs on the doctor's family and forces the doctor to listen while his son's arm is broken. It's a brutal scene and what makes it so effective is that Lapeyre leverages the audience's imagination against the set up in order to make it as horrific as possible without abandoning the one setting premise which, through its repetition of empty hallways and locked doors, gives the film such an overwhelming sense of dread.

A film like Cold Blooded, which comes so close to being a horror film in terms of its violence and the beats of its plot that it feels more like a thriller/horror hybrid than a straight crime thriller, doesn't necessarily need much from its actors, but in this case the actors bring a lot to the story. Palmer and Robbins play nicely off each other as unlikely allies, the one struggling to maintain her moral code as her humanity is gradually stripped away from her while the other attempts to take advantage of that for his own purposes, and MacDonald is a solid heavy who turns Holland into a villain that can believably go to any lengths to get what he wants. Like many films of its type, Cold Blooded has its share of plot holes and questions (among them why Holland would go to the hospital, which presumably has some security cameras, himself rather than send his goons to collect Cordero and bring him to a new location, and how Frances can take so many blows to the head and still keep getting to her feet), but it's ultimately an entertaining enough film that you can look past those flaws in order to enjoy it for the unfussy genre picture that it is.
Posted by Norma Desmond at 8:00 AM