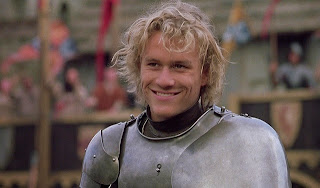 It's a story that is, unfortunately, not very unusual: the right film comes out at the wrong time, leaving it looking like a failure when, on closer inspection, it's really a success. The world was not ready for A Knight's Tale in 2001. If the film were released today, I suspect that it would be more rapturously received, what with Game of Thrones having brought increased popularity to medieval-esque stories and Quentin Tarantino's two forays into "period" pieces done their part to naturalize the mix of contemporary music with historical settings. In 2001, however, a lot of critics seemed to get hung up on the anachronistic use of music (one exception was Roger Ebert, who in his review wrote, "[director Brian] Helgeland has pointed out that an orchestral score would be equally anachronistic, since orchestras hadn't been invented in the 1400s. For that matter, neither had movies."), and as a result the film maybe earned an unfair reputation for "weirdness" that kept it from finding a larger audience. But time has been kind to A Knight's Tale, a film which might be a bit odd but is also a lot of fun, as of course it must be since it makes use of "We Will Rock You," a song which is incapable of being anything but awesome no matter the time period.

Heath Ledger stars as William Thatcher, a man born to the peasant class who has nevertheless grown up dreaming of becoming a Knight. As the film opens he's a squire, along with his friends Roland (Mark Addy) and Wit (Alan Tudyk), to Sir Ector, who has died suddenly while in the midst of competing in a tournament. Needing the tournament winnings so that they may indulge in such luxuries as getting something to eat, William puts on Sir Ector's armor and impersonates him, finishing the tournament in his place and taking the prize. Roland and Wit are thrilled and more than ready to return home to London, but William has other ideas: instead of spending all their winnings, they should invest it by way of purchasing what's necessary to allow William to compete in more tournaments. Though reluctant, Roland and Wit agree to help William train and then set off with him for Rouen, where they encounter Geoffrey Chaucer (Paul Bettany), who offers to forge the patent of nobility William will need in order to compete in exchange for the trio agreeing to feed and clothe him (a compulsive gambler, Chaucer has been stripped of all his possessions, including his clothes, as a result of his debts). Later, when William - masquerading as "Sir Ulrich von Liechtenstein" - sees what an effective herald Chaucer is, he's invited to stay on with them in that role and share in their winnings as they move from tournament to tournament. Also adopted into the merry band is Kate (Laura Fraser), a blacksmith who fashions new lightweight armor for William which sees him through the various tournaments as they wind their way towards the "World" Championships in London.

But before all that, while still at Rouen, William meets the woman who will become his great love, the man who will become his great rival, and the man who will become his great champion. The woman is Jocelyn (Shannyn Sossamon), a noble woman, the rival is Count Adhemar (Rufus Sewell), a Knight who competes with William both in tournaments and for Jocelyn's hand, and the champion is Edward, the Black Prince (James Purefoy), who competes in tournaments under an assumed identity until his real identity is exposed, causing all challengers to forfeit. William and Jocelyn flirt their way from tournament to tournament, and the legend of Sir Ulrich von Liechtenstein grows as he wins championship after championship. The victories come with particular ease during a long absence by Adhemar when he's called to lead troops at war, but he returns to the games in time for the World Championship in London and in time to catch William paying a visit to his father, whom he hasn't seen since childhood. His identity now exposed, and the threat of public humiliation and imprisonment hanging over his head, William has two choices: he can run and live a life of poverty with Jocelyn, or he can take a stand and demand to be recognized for what he's proven he's capable of being.

As written and directed by Brian Helgeland, A Knight's Tale is a lighthearted romp that knows exactly where it lives. It has an emotional core (derived not from the love story, which is the least compelling aspect of the plot, but from the friendship between William, Roland, Wit, Chaucer and Kate), but it ultimately doesn't take itself all that seriously, recognizing that no film in which a group of medieval peasants break into a rendition of "We Will Rock You" can be "serious" in the traditional sense. The film is anachronistic, but it revels in those anachronisms, from the Nike Swoosh that Kate embeds into William's armor, to a banquet dance sequence set to David Bowie's "Golden Years," to Jocelyn's brazenly 20th century style fashions. A Knight's Tale is a film that is very much in on its own joke and there is an infectious sense of joy that emanates from the screen, which I think goes a long way to explaining why the film has aged so very well. It's a stylized film, but there's such a lightness of touch to the whole enterprise that it never begins to feel burdened by that style, and though it's all a bit "silly," it manages to never start feeling "cheesy." It's a fun movie and it's nearly impossible not to smile along with it.

A Knight's Tale has a lot of winning elements, including Helgeland's fusing of the contemporary with the historical, and Bettany's terrific, scene stealing performance as Chaucer, but it isn't without its flaws. The love story which rests at the center of the narrative, though it features some decently written banter between William and Jocelyn, is ultimately a bit of a dud, never really sparking and getting off the ground even as the gears of the plot move to bring the couple together in the end. I remember when this movie first came out, back in the days when I was part of a sought-after demographic due to the fact that movie studios think that all you need to get a teenage girl's money is a cute boy and a girl she can aspire to be, and how Ledger and Sossamon were positioned as the next "big things" in a lot of the promotional material. Ledger had been positioned as one of the next big things for a couple of years at that point (since 1999's 10 Things I Hate About You) and his star quality shines through this film, even though it would still be a couple of years before he really came into his own as a star. Sossamon, meanwhile, was an entirely unknown quantity who would ultimately never be embraced by audiences and whose most distinctive quality here is that she bears a passing resemblance to Angelina Jolie but possesses none of Jolie's charisma. Jolie was a star pretty much as soon as she entered the pop culture radar, while Sossamon seemed, to paraphrase C. Montgomery Burns, like Jolie's non-union equivalent. Her already flat performance (though, in the interest of fairness, it must be stated that as Jocelyn is the least fleshed out of all the film's major characters, so many actresses probably would have had difficulty bringing her to life) is further muted by its proximity to the seemingly infinite charm of Ledger's, which in turn sucks some of the momentum out of the narrative whenever it pauses to focus on the romantic plot.

A Knight's Tale is a curious case of a successful film that merely seemed like a failure at the time. It's domestic take fell short of its production cost (to say nothing of its advertising costs), and it failed as a launching pad for Ledger and Sossamon, but it's a quality film that seems to have found a decent sized audience on DVD. In hindsight it features one of the most appealing performances of Ledger's sadly shortened career, and its refusal to stick to the "rules" of how a period piece is supposed to look and feel gives it a greater sense of timelessness than it might have otherwise had. It may not be perfect, but it's perfectly entertaining.


Should It Have Been a Blockbuster?: Verily.
Posted by Norma Desmond at 8:00 AM