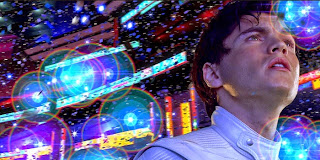 I don't suffer from ADHD, but I certainly felt like I did while watching Speed Racer, the Wachowski's hyper-kinetic adaptation of the anime/manga series. With its images flooded with color and sparkling things, sequences in which objects move at impossible speeds, a story that is loaded with subplots, and more changes in tone than any one film can gracefully handle, Speed Racer is an utterly exhausting movie to watch and, even though everything in it is moving so fast, it nevertheless manages to feel about a million years long thanks to its overly busy narrative. I think that Bound and The Matrix are two of the best films of the '90s and I think that Cloud Atlas is one of the most underrated films of the last few years, and because of that (and despite those two Matrix sequels) I still believe in the Washowskis and their ability to blend high style with storytelling. Speed Racer is not a success in that respect, but I think it could have been if the siblings had slowed down long enough to turn it into one movie instead of trying to turn it into several all at once. It might never have been a masterpiece, but it would have been better than the candy-coated disaster with a $120 million price tag that it ended up being.

Speed Racer's eponymous hero (Emile Hirsh) is a young man with a tortured past, driven as a racer not only by his lifelong desire for speed, but also by the death of his brother, Rex Racer (Scott Porter), a once revered driver whose legacy has been tarnished by alleged mob connections and a reputation as a dirty driver. On the verge of becoming a dominant force on the race track, Speed is approached by E.P. Arnold Royalton (Roger Allam) of Royalton Industries with an offer to race for him and have his every need as a racer met. As the Speed family is proudly independent and anti-corporate, Speed turns down the offer and in return receives a history lesson from Royalton, who reveals that the racing circuit is, and always has been, fixed. Royalton also promises to ruin Speed and his family, which includes his parents, Pops (John Goodman) and Mom (Susan Sarandon), who run Racer Motors, younger brother, Spritle (Paulie Litt), and Spritle's pet chimp, Chim Chim, and Speed's girlfriend, Trixie (Christina Ricci). Undeterred, Speed carries on and agrees to team up with Inspector Detector (Benno Furmann), head of corporate crimes, the mysterious Racer X (Matthew Fox), and racer Taejo Togokahn (Rain) to take Royalton down and expose his crimes.

Speed, Racer X, and Taejo race as a team in the Casa Cristo 5000, a notoriously dangerous, no holds barred rally which Pops forbids Speed from participating in, to no avail. Speed, Racer X and Taejo win the rally, however, Taejo is revealed to have been playing the others as part of a plan to increase the value of his family's company before Royalton's planned buyout. Once again Speed finds his illusions shattered by the ugly underbelly of corporate interests, but his faith is partially restored when Taejo's sister gives him the automatic invitation to participate in the Grand Prix which technically belongs to Taejo, but can be transferred to any member of the team that raced with him in Casa Cristo. With the odds against him thanks to Royalton having put a bounty on his head that can be collected by any driver that takes him out of the race, Speed enters the Grand Prix, determined to win not only a literal racing victory, but a moral victory as well.

Speed Racer is a film which is constantly moving, charging back and forth from its present day, in which Speed is determined to prove himself, and the past, in which Speed idolized his older brother, and unfolding its racing scenes at high intensity. In addition, it provides a constant visual sense of movement by having its background frequently dissolve into nothing more than threads of color, giving the film a feeling of deliberate artificiality that makes it seem like a live-action cartoon or video game. In this mode Speed Racer is so overtly campy that the first thing I can think to compare it to is 1997's Batman & Robin, though this film is thankfully free of multiple "ice" puns (it does, however, have one dreadful line in which Pops declares that an inept Ninja is a "Non-ja"). This mode, which makes the story seem like a low stakes enterprise aimed primarily towards kids, does not fit easily with the film's other primary mode, with is a drama about a family haunted by the mistakes of the past and trying to get set on the right course for the future. The camp mode almost works (though, since this mode is epitomized by no character better than Spritle, it is also pretty goddamn irritating), but the dramatic mode is an utter failure because all it does is highlight the hollowness at Speed Racer's core. There aren't emotions in the film so much as there are "emotions" expressed by two-dimensional characters (the only actors who come close to making it over this hurdle are, unsurprisingly, Sarandon and Goodman), and even the film's explicitly anti-corporate message rings false given that it's a decidedly corporate product through and through that was spun off into several ancillary products, including a line of die-cast Hotwheels toys and remote-control racing sets from Tyco. Speed Racer warning you about the machinations and inherent evil of corporations is like KFC handing you a Double Down sandwich while warning you about the dangers of high cholesterol.

In their approach to Speed Racer, the Washowskis apparently decided that the main attraction of the adaptation would not be making and then watching things go zoom, but in having things go zoom as a secondary exercise to developing and exploring a complex mythology. I can understand why they went in this direction, as after all their most successful film (The Matrix) combined a lot of world building and mythology alongside groundbreaking special effects and action sequences, but it doesn't work here because the characters are so paper thin that all this backstory just seems burdensome. At the beginning of the film, Speed is shown as a child sitting at his desk at school, restlessly fidgeting as he longs to get away from what bores him and get into a car where he can plunge himself into the adrenaline and super-stimuli of racing. As an audience, you start to feel the same way, desperate to get through the layers and layers of exposition to get to the only thing that gives the film any value whatsoever, which is the racing sequences. Yet Speed Racer keeps pulling back from that in order to return its attention to themes which, because the film can't focus on any one thing for more than a few seconds at a time and so jumps from thing to thing to thing, never really develop in any meaningful way. The only theme that really sticks is the bizarre (because of the finale's "twist" reveal) homoerotic thread that keeps popping up in various forms, from Spritle's frequent warnings that Speed should be careful about kissing Trixie because of cooties, to the phallic race cars battling for dominance on the track as they crash and slam into each other, and the whole character of Racer X whose black leather outfit makes him look like The Gimp from Pulp Fiction, which only seems underscored when he tells Speed, in a satiated tone, that he hasn't been "thrown around like that in years" following a race in which found their cars repeatedly grinding together. Due to the reveal at the end, I don't entirely know what to make of all that, but given that the only time that Speed shows any spark as a character is when he's immersed in the homosocial world of racing, it feels safe to say that despite the ultimate victory of the Racer family, the film isn't exactly endorsing the "traditional" nuclear family as sacrosanct.

Speed Racer would have done better had it kept things simple and fun, but its over abundance of subplots and its inability to find a tone and stick to it are only part of the problem. Hirsh is a fine actor in dramatic roles, but here in a film that can never really decide what, exactly, it wants to be, he just seems lost and delivers a performance that has all the conviction and charisma of a Ken doll. Meanwhile, Fox as the "mysterious" Racer X merely proves the truth of that line from Knocked Up ("You know what's interesting about [Matthew Fox]?... Nothing."), which makes the whole subplot involving Racer X's identity seem considerably less urgent than the film needs it to be. Speed Racer is a film that has way more than it needs in one respect (the narrative) and far too little of what it needs in another, sinking the endeavor before it can even really show what it can do.

Should It Have Been a Blockbuster?: No, and thank God because in these days of sequels and spinoffs I'm sure that if it had been a hit we'd be onto the Spritle spinoff trilogy by now
Posted by Norma Desmond at 2:27 PM