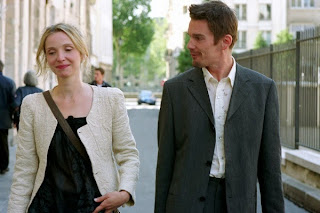 Richard Linklater’s Before series is cinema’s most unlikely franchise, consisting of three small-scale films about one couple who do a lot of talking while wandering through European locales. None of the three films have made much of a dent at the box office (the highest grossing of the trio is Before Midnight, which topped out at just over $8 million), but in the 19 years since Before Sunrise’s release they’ve developed a devoted following thanks to its two characters and their relationship as it evolves from one film to the next. The films echo into and comment on each other, tracing the ways that the two main characters have changed in the nine year intervals between films and how those changes have given new shading to the relationship. Yet while Before Sunset is enriched by how it can be seen as presenting a slightly wearier and battle-worn pairing than the idealistic romantics of Before Sunrise, and by how it sows the seeds for the conflicts which will propel Before Midnight, it (like the other two) is a film that can also stand on its own, which has its unique pleasures and can be enjoyed for what it is in and of itself, rather than merely as one part of a bigger whole. Before Sunset isn’t just the middle chapter in a trilogy; it’s a resonant story about two people who, though touched with regret, believe that they have settled into the lives they are going to lead, and who on being brought back into contact with each other are forced to ask: what if?

Nine years after Jesse (Ethan Hawke) and Celine (Julia Delpy) said their farewells at a train station in Vienna, they are brought back together at a book store in Paris. Jesse is there promoting a book he’s written based on their brief encounter and Celine, having seen a poster advertising the event, emerges from behind the shelves like a ghost – or, at least, Jesse’s face looks as if he’s just seen a ghost. He’s got a plane to catch but insists that he has some time to kill first, so the two decide to go for coffee and slowly pick up the thread they let drop nearly a decade earlier. Jesse is now in a failing marriage that is being kept together only by his desire to make things work for the sake of his son, while Celine is involved with a photojournalist whose main attraction seems to be the frequency with which he’s absent. Neither is living the life that they pictured themselves leading when they were younger and the more they talk, the more they begin to wonder if they’ve been traveling the right paths, if maybe they were meant to be together even if it would mean exploding their current lives to make that happen. Jesse has a plane to catch but he keeps finding excuses to put off going to the airport and Celine keeps reminding him that he has to go only to declare, at the end, “Baby, you are gonna miss that plane.” He knows it, they’ve probably both known it since they locked eyes in the book store, but that doesn’t undermine the effect of the moment. This is it and here they are, just on the edge, about to make the move and seize it and it’s not the end of the story, just another beginning.

Written by Linklater, Hawke and Delpy, Before Sunset hits that sweet spot between having dialogue that plays cinematically and feels natural. Conversations which have the potential to be mundane are instead made fascinating, both because of the ways that the body language of the actors tell the story beneath the dialogue, and because of the way the conversation shifts through the course of the film. In the earliest scenes, Jesse and Celine speak to each other almost as if they’re “auditioning” for each other – they’re feeling each other out and trying to connect their current selves to who they were when they first met. As the film progresses, this sense of being “on” slowly begins to fade and they stop speaking in generalities and start reaching deep, confessing to the disappointments and compromises that have become part of the fabric of their identities, and finding relief in the connection they still have with each other, which they’ve never been able to find with anyone else and which they feared had been lost thanks to the youthful and naïve conception of how things work that allowed them to simply walk away from each other the first time. If Before Sunrise is idealistic, a movie about two people still only taking their first steps into real life and clinging to a fanciful idea of love and relationships in which all things can be left to “fate,” then Before Sunset is the weary response. “When you’re young,” Celine states, “you just believe there’ll be many people with whom you’ll connect. Later in life, you realize it only happens a few times.” This film is about two people who have made mistakes and learned from them, becoming more mature people even if they had to suffer a bit for it.

Before Sunset resonates because it touches on genuine emotional truths. It’s a story about two adults still coming to terms with the consequences of the decisions they made at a time when choices seemed endless and the world was full of nothing but possibility. Reality has narrowed things down considerably, but there are still choices left to be made, and new chapters left to be written. It’s a story about regret, but it’s also a story about hope and second chances and possibility. It’s a “simple” movie told in simple terms, but that’s part of its beauty and a huge part of its charm. It’s not flashy, it’s just a story about two people that you truly want to know more about and want to spend more time with. As it ends, it invites the question, “What happens next?” and leaves you wanting more – and if that’s not a sign of a great story, I don’t know what is.
Posted by Norma Desmond at 8:00 AM