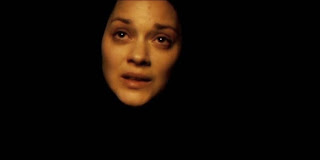 "Keep, ancient lands, your storied pomp!" cries she
With silent lips. "Give me your tired, your poor,
Your huddled masses yearning to breathe free,
The wretched refuse of your teeming shore.
Send these, the homeless, tempest-tost to me,
I lift my lamp beside the golden door!"
- "The New Colossus" - Emma Lazarus

The immigrant story is one of two competing narratives. One is a story of hope and opportunity, the other is a story of hardship, marginalization and, in some cases, exploitation, both framed by another set of competing narratives, one in which immigrants are desired for their contributions to the growth of a nation, and one in which they are villified and characterized as leeching off the strength of a nation that they did not help to build up. James Gray's The Immigrant functions in both modes of the immigrant story, beginning and ending in hope, but bridged by a prolonged period of despair and pain. It is a thematically rich and visually stunning work anchored by great performances from Marion Cotillard, Joaquin Phoenix, and Jeremy Renner. No wonder its distributor (The Weinstein Company strikes again) has essentially abandoned it in release.

The film opens with the arrival of Ewa (Cotillard) and her sister, Magda (Angela Sarafyan), at Ellis Island. The two have fled post-WWI Poland and expect to start over in New York, where their aunt and uncle are already living, but rather than being greeted with open arms, they're practically turned around and put right back on the boat. Magda is immediately quarantined on the island's hospital and soon diagnosed with tuberculosis, while Ewa is informed that the address they've provided for their aunt and uncle is fictitious and that word from the ship is that she's a woman of low moral character. She is denied entry but avoids deportation through the intervention of Bruno (Joaquin Phoenix), who claims to be a member of an aide society but is actually a pimp and the master of ceremonies at a burlesque show. Bruno takes Ewa in and uses a combination of force and manipulation to get her to work for him, convincing her that, with the help of his connections, she could earn enough money to buy Madga's way off Ellis Island. With no other alternatives, Ewa stays with him, becoming his favorite in the process and earning the enmity of Belva (Dagmara Dominczyk), one of the other prostitutes.

After being picked up by the authorities and taken back to Ellis Island to be deported, Ewa meets Emil (Jeremy Renner), an illusionist who performs for the deportees and is instantly taken with her. Their paths will cross again later, after Bruno is able to secure Ewa's release and Emil turns up at the club which hosts Bruno's show. Bruno and Emil are cousins with a history of friction which worsens as Emil begins to circle Ewa, and then rises to a fever pitch resulting in the two men getting into a fight and Bruno and his retinue being kicked out of the club and having to take their show to the streets. This does nothing to deter Emil, however, and he continues to pursue Ewa, eventually trying to convince her that she doesn't need Bruno to get the money to buy Madga's freedom and that, once Madga has been released, the three of them can strike out for California to start a life together. That the situation between Ewa, Emil and Bruno can only be resolved through tragedy seems clear, but just how that tragedy will play itself out is not.

The Immigrant is, first and foremost, a beautiful looking film which captures both the grandeur and promise of the world just beyond the film's edges and the grittiness of the seedy margins in which its story plays out. The film is finely rendered in its mise en scene, and in a way that feels natural and authentic, rather than like the result of meticulous period detailing, with rooms that have a lived-in sense of history, of having acted as way stations for multitudes of people in states of transition. The cinematography of Darius Khondji makes the story seem both large in scope and bracingly intimate, particularly in scenes where the use of chiaroscuro lighting gives certain shots the look of Caravaggio paintings come to life, bringing the emotional intensity of the story into sharp focus. While Cotillard gives a masterful performance throughout, it's the quieter moments, when the film directs its gaze at her face and the complex mixture of emotions playing out on it - from the pain of her past and present situations, to her continuing hope for better, to her determination to survive not just for herself but for the sake of her sister - that she really shines, leaving you with the impression that she's the only actress who could have played this particular character. In a similar manner, Phoenix, in his fourth collaboration with Gray, completely owns his role as Bruno and makes him, not sympathetic exactly, but vulnerable and ultimately tragic. He is not a good man (though he gains some degree of redemption in the end) but he is a complex figure, emerging from the same marginalized space as Ewa, but with the benefit of having gained the ability to harness power over others in order to advance himself ever so slightly. The power he has is buffered by quotation marks because it is so limited and so situational (as the film reveals the deeper it goes into its story) - it only seems sizable in comparison to the complete lack of power enjoyed by Ewa.

The notion of self-determination is one which rests just beneath the surface of the narrative, informing without overtly defining the story. Ewa is a woman who is stuck, with whatever choices she can be said to have quickly disappearing in front of her eyes. She arrives in America having developed a reputation for "low moral character" which is the result of her having been raped on the ship. She's thus held responsible for something over which she had no control, forced to be accountable for a crime in which she was the victim. She's then rejected not only by the country which was supposed to be a safe haven, but by the uncle who refuses to allow her "disgrace" to spread to him. She's then sucked into Bruno's world as if caught in a riptide, her life with him characterized as a combination of imprisonment and a bargain struck between them. Late in the film Bruno will deny that she's his prisoner and state that she could leave whenever she wanted to, but that's not strictly true. Ewa is a woman without a home, without a family, and without a means to make a legitimate living. If she weren't at Bruno's mercy, she would likely be at the mercy of some other man and it isn't until Bruno finally gives her the key to choosing her own course that she finally gains the ability to determine the direction of her own life and escapes into her future.

As written by Gray, The Immigrant is a richly realized and deeply felt film. It's a story which relies on high emotions to carry it from one section to the next, and might easily have devolved into melodrama, but Gray keeps it from tipping over that edge and treats the story with utmost sincerity, entirely devoid of irony. Though it is a period piece, it does not approach its subject from the distance of decades, treating it as something already preserved in amber; rather, it enters the story with a sense of urgency that allows the film to breathe. The Immigrant is was obviously a passion project for Gray, whose execution here is equal to his staggering ambition and finds the intersection of the deeply personal and the universal. This is a wonderful film on every level.
Posted by Norma Desmond at 8:00 AM