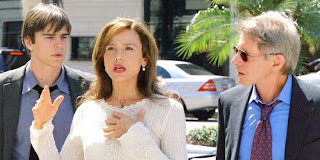 Some movies are timeless, possessed of that special quality that allows them to play in any era and still seem vital and alive. Some movies are so rooted in the time and age in which they were made that they start to feel dated, whether after decades or within only a few years of release. Then there are movies like Hollywood Homicide, which doesn't feel "dated" so much as it feels like an impression of the early years of this century as filtered through the perspective of someone not from this planet. I would say that it feels like parody, except that for something to work as parody it needs to first understand what it's mocking. Like the grizzled veteran cop that makes up one half of the story's protagonist team, the film seems to be shrugging and stating apologetically that it just doesn't get this stuff ("this stuff" being hip hop), but judging from its confused tone, thrown together plot, and labored attempts at "comedy," a lack of understanding about hip hop culture was the least of Hollywood Homicide's problems.

Hollywood Homicide announces itself as ridiculous right from the start with a scene set at a nightclub where a rap group called H20Click is performing, though how anyone in the club would know that is a mystery as even when they're shown in close up they're speaking so softly that you can't actually make out what they're saying. No film or television depiction of being in a club is ever really realistic - if it was, it would be a scene of one character saying something that's drowned out by the thudding of the music, followed by another character yelling, "What?" - but this scene is particularly silly, making the rap group look like they're performing in a library and have been warned not to speak above a whisper. After coming off stage, the group is gunned down by two men who kill each member in succession, but miss a witness who leaves behind a puddle of urine which will alert the authorities to the fact that he was there. The two detectives assigned to the case are Joe Gavilan (Harrison Ford) and K.C. Calden (Josh Hartnett), neither of whom is particularly invested in their roles as police officers. Gavilan has a side business in real estate which isn't going as well as he'd like and has left him in the position of needing to sell a multi-million dollar house or face complete financial ruin. Calden, meanwhile, is having second thoughts about following in his late father's footsteps by becoming a cop and is thinking of trying to make it as an actor. Like Gavilan, he also has a side job, but his is as a yoga instructor, a job he got into primarily to meet women but which he has since fully embraced for his ability to find his "center" when he's striking yoga poses.

Gavilan and Calden are on the case, which will eventually lead them to H20Click's manager Antoine Sartain (Isaiah Washington), but first they get sidetracked by a whole bunch of other things. In addition to the house he's already having a hard time unloading, Gavilan takes on a new real estate deal, trying to negotiate a sale between producer Jerry Duran (Martin Landau) and the owner of the club (Master P) where H20Click were murdered, while Calden is making plans for his big break by renting a theater and inviting a bunch of Hollywood types to his staging of A Streetcar Named Desire. Meanwhile, the two learn that they're being investigated by Internal Affairs and that the head of the investigation is Benny Macko (Bruce Greenwood), who has long had it in for Gavilan and gains a new reason to hate him when he learns that Gavilan is dating his ex-girlfriend, Ruby (Lena Olin), a radio psychic. Other subplots (because lord knows there aren't enough already) include a Hollywood Madam (Lolita Davidovich) whom Gavilan has been trying to get to act as a source for him, but who first wants Gavilan to make a deal with the Vice squad to get her out of trouble, and Calden's investigation into the death of his father, which occurred on the job and under suspicious circumstances.

Written by Ron Souza and Ron Shelton (who also takes on directing duty), Hollywood Homicide at once has too much plot and no plot at all. It's a story with a lot of random pieces that are fitted haphazardly together, held by little more than the audience's willingness to believe in the power of coincidence. Take the Macko character, for example. In most films, Gavilan being involved with Ruby would be enough to inspire Macko's quest to railroad him, but Macko doesn't even know that Gavilan is involved with Ruby until after he's put together his case against him (which, for the record, is a revenge plot inspired by Gavilan having embarrassed him professionally years earlier). So Macko hates Gavilan to begin with, and then hates him even more once he finds out that Gavilan is hooked up with his ex-girlfriend. That's pretty coincidental but, perhaps, not so hard to believe if the audience really wants to. Pushing its luck, the film then decides to stack the deck even more by revealing that Macko was also involved in the death of Calden's father, because apparently Macko has no life outside of Joe Gavilan. Add in the fact that the other perpetrator in the murder of Calden's father is Leroy Wasley (Dwight Yoakam), who also happens to be in on the rapper murder plot with Sartain, and you're asking the audience to accept a lot of coincidences in the name of entertainment - which means that your film better pretty entertaining. Hollywood Homicide fails in that respect because its attempts at comedy are so lame and its attempt to explore the section of the entertainment industry in which its story is rooted is so ill-conceived.

Hollywood Homicide has a strange relationship with the world of hip hop (and, by extension, black culture), which it seeks to exploit even as it refuses to take it seriously or try to understand it. The film's soundtrack is peppered with hip hop (and a bit of Motown) which feels almost like caricature as it plays out over images of black characters depicted as either clownish and harmless (epitomized no better than in the character who witnesses the rap group's murder and eventually leads the detectives on a "zany" chase that might be funny if it didn't go on for so long and become so tiresome) or thuggish and marked for death. There are multiple villains in the film, from Sartain to the two hitmen hired by him to Wasley to Macko, but only the black villains end up dead while the white villains are instead brought to proper justice (the finale finds Gavilan tipping Sartain off the roof of a building, while Calden has the opportunity to murder Wasley and avenge his father, but chooses not to do so). In the guise of embracing hip hop, the film is instead neutralizing something that it finds scary and/or confusing by outright eliminating it or rendering it ridiculous. Gavilan doesn't get "it" and neither does the film, but in the end it doesn't matter because "it" is made into something of little consequence, easily reduced and brushed to the side as the dominant culture reaffirms itself.

While Hollywood Homicide has some questionable politics going on beneath the surface, it ultimately doesn't really matter because the film itself is so inconsequential. It has no idea what it is (is it a murder mystery action thriller? a mentor/protege drama? a wacky comedy involving psychics and cops who really want to be actors and real estate agents?) and abruptly changes tone from one scene to another. Every character feels like he or she has been transported over from some other movie and none of the actors, save Olin who invests Ruby with a flaky sensuality that makes her the film's lone bright spot, seems particularly present. Ford seems bored and Hartnett is almost aggressively unbelievable with respect to every aspect of his character, from the anguished son of a murdered father to the Buddhist forever finding his center and place of calm to the ladies man who beds women left right and center (I don't doubt that a guy who looks like Hartnett would get a lot of women, but I think that if he was continuously calling the wrong women by the wrong names and didn't have at least a little bit of charm or charisma to make up for it, he'd end up striking out fairly often). I've never had the opportunity before to use the word "boondoggle" to describe a film, but that's what Hollywood Homicide is. It's a film with no reason for being and about which even those directly involved seem to care very little.

Should It Have Been a Blockbuster?: Nope, not even if it had managed to be the only film released between May and August of 2003.
Posted by Norma Desmond at 8:00 AM