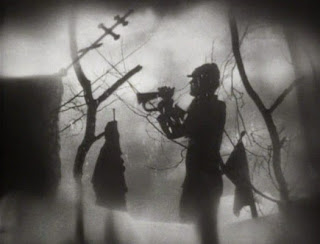 Watching a Guy Maddin movie is like watching a movie from a time and a place that has never existed. Archangel was made in 1990, is set in 1919, emulates the look of films from the silent and early sound era, and seems like it comes from another planet. It is a gloriously bizarre movie in which several characters are either suffering from, or thought to be suffering from, amnesia, a war is being fought for reasons most involved don't understand, and a "cowardly" man is stabbed so that his intestines spill out and then rallies to strangle his attacker to death with them. Archangel, like pretty much all of Maddin's works, is a film that will appeal to a limited audience, but if you like weird little movies that are as creepy as they are darkly funny, then I suggest you look no further than this one.

Despite its inherent strangeness, Archangel is based in an actual historical event. In 1919, following the end of World War I, troops from around the world, including Canada, were sent to Archangel in northern Russia to intervene in the Bolshevik Revolution. One of the Canadian soldiers dispatched to Archangel is Lt. John Boles (Kyle McCulloch), possessed of only one leg and the ashes of his dead lover Iris. Boles is billeted with a family consisting of Jannings (Michael Gottli), disparaged for being a "coward," his wife Danchuck (Sarah Neville), who promptly falls in love with the brave and manly Boles, son Geza (David Falkenburg), a baby never named by the film, and grandmother Baba (Margaret Anne MacLeod). Soon after his arrival, Boles spots Veronkha (Kathy Marykyca), whom he becomes convinced is really Iris, forgetting that Iris is dead and that he recently had an urn with her ashes in it. Veronkha, meanwhile, is married to Philbin (Ari Cohen), an amnesiac who forever thinks that it is his and Veronkha's wedding day. Quickly becoming obsessed with Veronkha, whom he believes has simply forgotten that she's really Iris, Boles begins following her around and, overhearing part of her conversation with Philbin's doctor, comes to believe that "Iris" bore him a child and that that child is Jannings and Danchuck's baby (leading to a line later on when Boles, returning to war, asks Danchuck to do him the favor of looking after "his" baby should anything happen to him).

When Veronkha, who had had her marriage to Philbin annulled after finding him having sex with an employee of the hotel where they were having their honeymoon, decides to remarry Philbin and flies with him to Murmansk to make another attempt at their honeymoon, Boles follows. At the hotel Veronkha briefly mistakes Boles for Philbin and attempts to make "Philbin" jealous by telling him that she's fallen in love with Boles. When the man is revealed to be Boles rather than Philbin, Veronkha enters into such a state of shock that now she is suffering from amnesia, and Boles takes the opportunity to convince her that she's his lost love Iris. Meanwhile, Bolsheviks have attacked Archangel and killed Jannings, who manages to save Geza despite having been sliced open but who is condemned in death as a "coward" because Geza, whose head was covered when he was saved, believes that it was Philbin who came to his rescue. Now, with the war beckoning for Boles' return, fate steps in to cause a rift between him and Veronkha/Iris by having her memory restored at the sight of Philbin. With seemingly has nothing left to lose (except that baby he asks Danchuck to look after) Boles heads into a battle where grenades are decorated with the words, "God punish Canada" - but he still has the hope that he can win back the woman he so desperately believes is really Iris.

How much you enjoy Archangel will depend, first, on how much you enjoy weird movies where the filmmaker moves gleefully beyond the usual boundaries of content (there's a strong psychosexual current running through the film which arguably reaches apex early on when Boles seems to go into a fit of ecstasy while flogging Geza for a minor misdeed) and plays around a lot with form, doing things that most filmmakers would actively try not to do, like deliberately degrade images and use low fidelity recording for the dialogue. Maddin does a lot to call attention to how the film has been constructed, which is good because it immediately unbalances the viewer enough to make the series of bizarre images to follow seem, not less strange, but slightly less shocking. Secondly, it will depend on your familiarity with silent era movies, as Maddin references and borrows from such silent masters as Sergei Eisenstein (in particular, this film's depiction of "the Huns" recalls Eisenstein's Alexander Nevsky), Carl Theodor Dreyer, and the German Expressionists. In that respect Archangel is a fun movie to watch simply to see the spin that Maddin puts on those now classical techniques in order to fit them into his unique vision.

"Unique" truly is the only word that can properly describe what Maddin does - there may very well be other filmmakers elsewhere in the world doing similar things, but if there are I haven't encountered any of them yet. His films have a contemporary attitude, an old school look, and a feel that is out of time entirely, and his work is instantly recognizable as being his. The sheer strangeness of his world is, understandably, too off-putting to net Maddin a wide audience (among other bizarre images displayed here, is a scene in which soldiers in a trench are inundated by a flood of rabbits into their trench), but watching one of his films is such a rich, funny, surreal, challenging, and often rewarding experience that it's at the very least worth giving it a try.
Posted by Norma Desmond at 8:00 AM