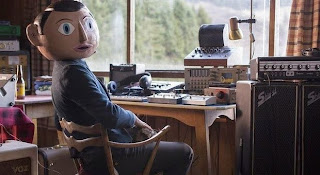 "Quirky" can have negative connotations when it comes to describing movies. Around the time that the Sundance Film Festival became ascendant, and independent movies increasingly became "independent" movies, quirkiness became a commodity, a form of cinematic gentrification used to make cookie-cutter stories seem somehow unique. The "quirky Sundance" movie quickly started to seem especially ubiquitous, a fact lampooned perfectly (as so many things have been) by The Simpsons in the episode "Any Given Sundance" when a film is described as “Paul Giamatti… is the world’s greatest super spy… who only exists in the mind of an overweight, agoraphobic jazz musician… played by Martin Lawrence in a fat suit.” In 2014, quirky movies are part of a battered tradition, but there are still movies who come by their quirkiness honestly, as a means of expressing deeper themes rather than as a lazy means of making a it seem more marketable. Lenny Abrahamson's Frank is one of those movies, a film which premiered at Sundance and in which one of its main characters is a man who wears a papier-mache head 24/7 - and that's only where the quirkiness starts.

Though called Frank, the film is just as much, if not more, about Jon (Domhnall Gleeson) who yearns to be a professional musician and songwriter but can't find a way to get the perfect songs he believes exist inside of him out and onto paper. One day, while eating a ham and cheese sandwich ("#livingthedream," he announces on twitter), he witnesses a man being rescued from an attempt at suicide by drowning and is informed by one of other witnesses that the man is the keyboard player for a band called "Soronprfbs." That other witness is Don (Scott McNairy), the manager of the band, and offers Jon a chance to play a gig after Jon announces that he, too, plays the keyboards. Jon is over the moon and when he shows up at the venue, he wanders into a strange scene and tries to fake his way through a performance with the band, which includes theremin player Clara (Maggie Gyllenhaal), drummer Nana (Carla Azar), guitar player Baraque (Francois Civil), and lead singer Frank (Michael Fassbender), who performs and lives with a giant papier-mache head over his own. The performance ends in disaster but Jon makes an impression on Frank and is invited to join the band on what he believes will just be another gig, but will in fact be a months long period of seclusion while the band attempts to record an album. Though Jon is enthusiastic about the chance to be part of a real band recording a real album, he starts to become worn down by the fact that no one appreciates his attempts to contribute to the direction of the album and everyone, especially and vocally Clara, hates him and thinks he's a poseur - everyone except Frank.

The recording process drags on for eleven months and the only thing that keeps Jon sane is posting updates about the band on various forms of social media. He posts several videos of the recording process that begin to attract a following and prompts an invitation for the band to perform at the South by Southwest festival. Most of the band is furious when they learn what Jon has been doing, but Frank is elated to learn that they have fans and declares that they will play South By Southwest (how Frank gets through airport security without removing that head is not addressed). On arrival the band is dismayed to learn that the loyal fanbase they believed they've amassed will not be present at the festival (and is not actually as large, in the grand scheme of things, as Jon had thought) and Frank starts to come entirely unglued at the thought that they're about the play before yet another audience (but one much bigger than any of the others) that won't "get" what they're doing and will hate them. After Frank tries and fails to change course by writing some more "likable" songs, Clara takes a stand and tries to talk him into pulling out of the performance, while Jon encourages him to go through with it so that they'll have their big break. But while Jon is so blinded by his desire for fame that it makes him think he knows what he's doing, he's ill-equipped to deal with things as Frank comes apart and he's left to try to pick up the pieces.

Much of the criticism I've read of Frank has to do with the abrupt tonal shift in the film's final act. To be sure, the film does play out as a darkly whimsical comedy until the setting moves to South by Southwest, at which point it begins spiraling towards tragedy, but I actually think that's one of the film's strengths. "Tragedy" is everywhere in this story, including the beginning when Jon witnesses the suicide attempt of the band's former keyboard player, so it makes perfect sense that the story's shading gets darker and darker as it goes on. Plus, the film centers largely on Jon, whose goofiness masks something grasping and insidious, the depths of which are thrown into sharp relief late in the film by the look of pure hatred that Jon levels at Frank following the failure of the South by Southwest performance. Frank plays out like a modern day update on Amadeus, with Frank as the genius star for whom music comes effortlessly and Jon as jealous wannabe who believes that fame and adulation have been unfairly snatched from his grasp. Jon wants to be famous - the film's constant asides via Jon's Twitter and other social media accounts are not simply a means of connecting the film to the zeitgeist, but of expressing Jon's need to be noticed, acknowledged, and revered - and has no qualms about attaching himself to Frank and pushing him, regardless of how emotionally/mentally fragile he is, into the spotlight so that he can bask in the glow, too. Though Clara is so angry and bitter that you don't really want to give her credit for anything, she is dead-on when she declares that Jon is a "tick" sucking the lifeblood out of Frank.

As written by Peter Straughan and Jon Ronson, inspired in part by Ronson's experiences with Frank Sidebottom, Frank is a funny film but it has some very sharp edges. The third act sometimes feels like it belongs to an entirely different movie, but at the same time I wouldn't want a thing about it to change because many of the film's best and most affecting moments come from it, including a sad but beautiful final performance from the Soronprfbs, a scene which offers a window into Frank's life before the papier-mache head, and Clara's especially melancholy rendition of "On Top of Old Smokey." Frank ends in a place that is tonally opposite from where it began, but it digs so deep in the process, and features such great performances from Gleeson, Gyllenhaal, and Fassbender, that it's difficult to consider the film as anything but a success. Frank is a "quirky" movie in that it's about a band of misfits behaving strangely, but scratch the surface and it's a story about damaged people struggling to find a safe way to engage with the world, and about how sometimes those damaged elements ultimately can't be "fixed" or even necessarily explained in terms of cause and effect (it is also, to a lesser extent, about the difference between being laughed with and laughed at). It's an odd little movie, but it's also engaging, entertaining, and moving.
Posted by Norma Desmond at 8:00 AM