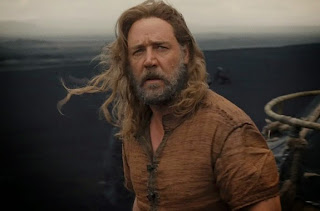 Whatever else you can say about Darren Aronofsky, you can never accuse him of lacking in ambition. Whether he's telling an intimate, small-scale story about addicts hitting rock bottom and then finding new depths to sink to, or a science fiction epic spanning multiple time frames, he thinks big and follows his vision through to the end. Although he didn't seem like the most likely of contemporary directors to make a Biblical epic, after seeing Noah it's now apparent that Aronofsky was, in certain respects, the perfect director to tackle the story of Noah's ark. In other respects the story seems to have gotten away from him, with somewhat generic action/epic elements overwhelming the more unique and compelling elements of the film. My impression of the film was pretty evenly mixed - parts of it I found glorious, other parts I found considerably less so. It is at once a visionary work and a bloated miss.

Aronofsky starts with Creation and will continue circling back to it throughout its 138 minutes. It introduces Noah (Dakota Goyo) as a boy who witnesses the murder of his father at the hands of Tubal-cain (Ray Winstone) and then retreats further and further from the world that is becoming increasingly corrupted by the descendants of Cain. As a man (now played by Russell Crowe) he lives in seclusion with his wife, Naameh (Jennifer Connelly) and their three sons: Shem, Ham, and Japheth. After having a vision, Noah uproots the family and sets off to visit his grandfather, Methuselah (Anthony Hopkins), adopting an injured girl named Ila along the way, the only survivor of a massacre. After visiting with Methuselah and receiving from him a seed from the Garden of Eden which in turn prompts a sign from God that Noah has been chosen, Noah gains the trust of the "Watchers," fallen angels who have been confined to stone and who agree to help Noah and his family to build the ark which will protect the innocent of the earth (the animals) from the coming flood.

Years pass and while Japheth, who was only an infant when the family set off towards Methuselah, is still a child, Shem (Douglas Booth) and Ham (Logan Lerman) are young men, and Shem and Ila (Emma Watson) have become a couple, a fact which is a source of torment for Ham. As the time for the flood approaches, and the animals of the Earth begin assembling at the ark, Tubal-cain and his followers are alerted to the presence of Noah and his family. After learning the purpose of the ark, Tubal-cain assembles his forces to attack the Watchers and take the ark for themselves but their efforts are for naught and when the waters begin to rise, only Noah and his family are aboard - or so most of them think. Unknown to all except Ham, Tubal-cain is also on board and uses the already existing discord between Noah and Ham to manipulate Ham into helping him and plotting against his father. As the family's time on the ark grows, and Noah becomes increasingly strident in his decision that mankind will end with them, he becomes divided from the family. When Ila becomes pregnant and Noah decrees that if the baby is a girl she will be killed immediately, Noah makes an enemy of Shem and the rising tensions on the ark reach a fever pitch that could destroy life on the ship before it ever reaches land.

Visually, Noah is an often stunning film. The effects work that goes into the deluge is impressive, as expected, but it's the flair that Aronofsky brings to his conception of time's forward march and the changes made to the landscape in the process, and to the original sin and the death of Abel at the hands of Cain, both of which events are circled back to in a parenthetical fashion throughout the film with the latter event in particular conceived of as something which has echoed and repeated throughout history, that are most impressive. The Cain and Abel thread is a thematically rich idea which Aronofsky uses effectively as a supplement to Noah's personal crisis, in which he sees mankind as too mired in sin and too quick to violence to be worthy of continued existence, while the focus on the evolution of the natural world ties in to the depiction of Noah as a proto-eco activist (though I imagine that the impact of these sequences would be greater if The Tree of Life didn't already exist). With respect to the depiction of Noah the character, the choice to frame him as a harsh and uncompromising man who becomes, essentially, the ark's dictator is also a strong choice. He was an Old Testament guy, after all, and they weren't exactly known for being softies. It could be argued, of course, that the film's finale finds Noah becoming softened, but I would say instead that he merely exercises his free will to make a choice based on his own morality (foreshadowed by the scene in which he visits Tubal-cain's camp and is traumatized by the wanton murder of innocent women and children) rather than blind obedience to what he believes God wants.

As to the film's weaknesses, I found it strange that despite the fact that Noah continually points to the animals as the sole beings capable of innocence and therefore the ones deserving of inheriting the earth, the animals of the ark barely factor into the film aside from the scenes in which they are drawn to the ark. The bigger problem, though, is the decision that the film needed to have a traditional villain in the form of Tubal-cain and a big CGI fight sequence between Tubal-cain and the Watchers. While Winstone's performance is solid, the character really feels superfluous to a film that is already fully stacked when you consider that there is more than enough dramatic conflict within Noah's family to fit the narrative's needs. Noah's conflict with Shem, which expands out into conflict with Ila and Naameh, has nothing to do with Tubal-cain and Ham, though spurred on by Tubal-cain, is already in conflict with Noah because, to put it not so delicately, he's an adolescent male who thinks he's never going to get laid because his father won't save just one more (female) person. This aspect of the story, though well-played by Lerman, who practically vibrates with sexual frustration, is also part of one of the more problematic (though not really surprising, given the story) elements of the film, which is the depiction of women. Naameh is a glorified appendage whose only real function is to run interference between the unbending Noah and the sons trying to assert themselves, Ila is a character whose value comes through what she symbolizes - she's what affirms Shem's transition into "manhood" and the constant reminder of Ham's inability to follow suit - and the specter of "a woman" hangs over the scenes involving Ham. And when I say a woman, that's literally what is meant: any woman, doesn't matter who, if Noah had just gone out and collected a being with human female parts, Ham would've been perfectly happy forever more - all of which is pretty dehumanizing to women and really disappointing. Though I admire Aronofsky's ambition and think parts of Noah are great, those parts ultimately aren't great enough to nudge me past all the things that give me pause about it.
Posted by Norma Desmond at 8:00 AM