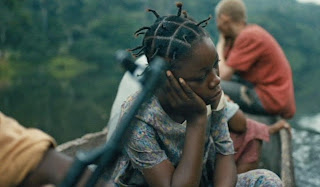 Childhood is a precious commodity in Rebelle (also known as War Witch), lasting barely a dozen years for the film’s protagonist before it is demolished completely, thrusting her into a way of life that most adults wouldn’t have the fortitude to survive. Throughout the film she is telling her story to her child, not yet born, as a means of explaining how she has been brought to this point and why she might not be capable of loving him or her once she’s given birth. This may sound depressing but Rebelle, though a hard film in many ways, does not dwell in pathos and instead brims with life even as it surrounds its protagonist with death. This is a story about war, but it’s also a story about love, survival and, amazingly, hope.

Set in an unnamed country in sub-saharan Africa, the story of Rebelle is related by Komona (Rachel Mwanza), who at 12 years old is kidnapped by rebels and forced to join the army of the Great Tiger (Mizinga Mwinga), forced to kill her parents, and sees the village she’s grown up in razed. Under the leadership of the Commandant (Alain Lino Mic Eli Bastien), Komona and the other children taken from the village are trained to be cannon fodder for the rebels, but Komona quickly sets herself apart through her ability to see the dead, some of whom warn her of where the opposing forces are laying in wait. She sees this ability to commune with the dead as a burden, as she is haunted by the ghosts, but the Great Tiger sees this as an asset worth bestowing on her the title and status of “War Witch.” Informed by Magicien (Serge Kanyinda), another child soldier, that Great Tiger has killed the War Witches who preceded her, she runs away with him and they try to lead a normal life together, succeeding until the Commandant finds them and takes Komona back to the rebel army. Now 14 and pregnant by the Commandant, Komona needs to find a way out both for herself and for the baby.

With a narrative that unfolds in a sort of floating fashion, combined with absolutely gorgeous cinematography (Nicolas Bolduc is the film’s cinematographer) and a preference for voiceover over dialogue, Rebelle is a film that is reminiscent of Terrence Malick, but it is in no way derivative. It is very much its own film, guided by the firm direction of Kim Nguyen (who also wrote the screenplay), which explores the horror and violence of the world Komona has descended into without wallowing in it. While it leaves no doubt about how brutal Komona’s experiences have been, the film favors suggestion over graphic depictions of violence and is ultimately less about warfare than it is about the loss of childhood innocence. The most emotionally piercing scenes in the film are the ones which remind us that these kids - kids we’ve watched wielding guns and killing people – are just that: kids. Scenes such as when Magicien and another child soldier play fight, pretending to be characters in a Kung Fu movie, or during the interlude when Komona runs off with Magicien and their behavior is dictated not by the burdens of making war, but by the burdens of budding hormones and the negotiation of power in a romantic relationship. In moments like these we’re reminded of how carefree their lives ought to be, and the fact that such moments can exist despite the continuing cycle of violence is what allows the film to strike a tone which is ultimately hopeful. Komona is scarred by her experiences, tormented in ways from which she will probably never fully recover, but she isn’t broken by them. She has endured more than anyone ever should, but she remains capable of finding and feeling joy despite her circumstances, and that is the note that resounds as the film ends.

Narratively and visually, Nguyen is a strong and compelling storyteller, but Rebelle owes its success in no small part to Mwanza. Playing a character who has been forced to grow up fast, but who is still ultimately a child, Mwanza inhabits her character completely and renders a performance which reflects the weariness borne of the character's all too adult experiences, as well as some small remaining facets of her childlike innocence. Komona is a complex and compelling character and Mwanza, in her first ever acting role, is fearless in the way she guides the character through her experiences and never falters whether expressing Komona’s anguish over all she has lost (and the things she has been forced to take) or her happiness whenever she’s able to snatch brief moments of it. The performance is flawless and the film itself is captivating and visually stunning, even when it focuses on the most vicious aspects of human behavior. Rebelle was a film that was 10 years in the making for Nguyen, but it’s a film with the kind of emotional permanence that will ensure that it lives on forever.
Posted by Norma Desmond at 8:00 AM