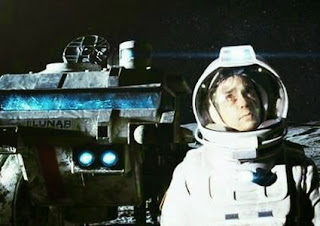 Is there a lonelier setting than outer space? Characters in outer space, so far removed from everything we know from our experience as human beings, pulled so far from their roots on earth, sometimes surrounded by little more than the vast expanse of the universe, seem particularly well-suited to explore existential questions. So it is in Duncan Jones’ wonderful feature length debut Moon, about a man stationed on the moon who discovers that he is not who or what he thought he was. Designed as an homage, of sorts, to cerebral science fiction like 2001: A Space Odyssey and Solyaris, Moon uses its backdrop to explore one of our most crucial questions: what does it mean to be human?

Set in the future, after earth has been saved from a global energy crisis by harnessing energy from the moon, Moon stars Sam Rockwell as Sam Bell, who is under a three year contract to man the moon base on his own. With only a robot named GERTY (voiced by Kevin Spacey) and the occasional video transmission from Earth to keep him company, Sam is at the psychological breaking point and is anxious to return to Earth, where his wife and their daughter await, when he goes out to work with one of the harvesting machines and crashes his rover, becoming severely injured. When he wakes up in the infirmary GERTY assures him that all is well, but Sam can’t shake the feeling that something is wrong and, more importantly, that GERTY is hiding something from him. When he goes out to investigate what he finds is... himself, still trapped in the rover and near death. He rescues the other Sam and both are left to grapple with what it means that they both exist and what will happen if and when the company discovers that they’ve become self-aware.

As virtually the only actor onscreen for the entire course of the film, interacting almost exclusively with himself, Rockwell delivers an absolutely amazing pair of performances as Sam1 and Sam2, who develop into distinct characters. Despite being played by the same actor, Sam1 and Sam2 have different physicalities, with Sam1 a softer, more broken down version of original Sam, and Sam2 more fit and virile. The physical differences extend to the two characters’ personalities, with Sam2 depicted as mentally sharper but also as possessing a much shorter fuse. As he’s only just been awakened, he’s in the mental headspace that original Sam was in when he first arrived on the moon, while Sam1 is mellower because he’s had time to reflect and make changes to become the sort of man that he believes his wife wants him to become. One of the most affecting things about the film is the way that Sam1 slowly comes to accept that everything he’s been working towards has been nothing but an illusion, that he’s put in all this effort to become a “better man” so that he and his wife can move forward, only for him to discover that he’s not a “person.” There’s no reward waiting for him; he’s a disposable commodity designed to break down after three years and be replaced by the next carbon copy.

But, as the interactions between the two Sams prove, they really aren’t carbon copies. They live and breathe, think and feel; they are individuals even if they are genetically identical. While some of the most entertaining moments in the film come from Rockwell and Jones’ ability to tap into the dark humor inherent in a pair of clones who act like Goofus and Gallant, it’s the emotional intensity that actor and director are able to wring from the premise that gives the film such incredible resonance. Moon has a lot of fun with its genre, particularly with respect to GERTY, who is a much kinder and gentler version of HAL 9000, and the low budget (but never “cheap” looking) effects, but it’s ultimately a film that takes the story seriously and seeks to explore its premise in some depth. Moon touches on familiar ideas and certain elements of it are conventional, but the film itself is one of a kind and it is enduring.
Posted by Norma Desmond at 8:00 AM