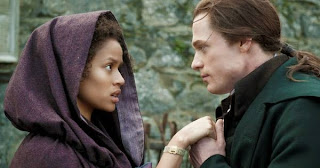 The story of Dido Elizabeth Belle might just as easily have been called "Limbo." Illegitimate but claimed by her father, raised in privilege but possessing privilege in name only, and fenced in by the conventions of class, race, and gender, Belle's protagonist at once has every option and no options whatsoever. If she's going to move forward, she'll have to forge her own path - and knock down those who might stand in her way. It's compelling stuff and Belle manages to wring a lot of genuine, raw emotion from it, even if the film itself isn't reinventing the wheel. Handsomely mounted but somewhat lacking in imagination, Belle is saved from blending in with other historical costume dramas by the powerful performance at its center.

As a young girl Dido, who has already lost her mother, is claimed by her father, naval officer Sir John Lindsay (Matthew Goode), plucked from the slums and taken to his uncle's estate Kenwood House to live. Though his uncle, the Earl of Mansfield (Tom Wilkinson), and aunt (Emily Watson) are stunned by his arrival at their door with his mixed race child, he insists that Dido be raised with all the comforts that a child of his is entitled to. Lord and Lady Mansfield are already raising another niece, young Elizabeth Murray, and reluctantly agree to accept Dido so that Elizabeth might have a playmate. The two girls grow up thinking of each other as sisters, though with the knowledge that Dido (Gugu Mbatha-Raw) is kept to different social rules than Elizabeth (Sarah Gadon). Though not kept hidden, exactly, Dido is prohibited from participating in formal social events such as attending at dinner with her family, while being allowed to join events where social conventions are somewhat more relaxed. It is during one of these relaxed settings that she meets Oliver Ashford (James Norton), the second son of an aristocrat, who takes a liking to her despite the protestations of his elder brother, James (Tom Felton), and his mother (Miranda Richardson). While the mother is won over to his cause once she learns that Dido has just inherited a considerable sum from her father, James remains vocal in his disdain, even as he pursues Elizabeth.

While Elizabeth comes to find securing a husband difficult once word gets out that her father intends to leave her penniless so that her half-siblings may inherit everything, Dido becomes engaged to Oliver even as she finds herself falling in love with John Davinier (Sam Reid), the son of a clergyman and briefly Lord Mansfield's student. The rift between student and teacher comes as a result of their differences over the case currently before Mansfield as Lord Chief Justice in which the crew of the slave ship Zong drowned the slaves on board, allegedly because their store of supplies ran too low to support both the crew and the slaves. Davinier believes that the slaves were drowned not out of necessity but because they were diseased and unfit for sale, leaving the insurance claim that the owners of the Zong have made their only means of collecting money. Dido becomes increasingly invested in the case, meeting with John in secret in order to discuss it, which infuriates Mansfield when he finds out both because Dido is putting her reputation at stake, and because he would prefer that she know as little about the Zong case as possible given the extreme pressure he's under to find in favor of the owners of the Zong, as any other finding could be a stepping stone to the abolition of slavery in England.

Belle gets a lot of mileage out of exploring Dido's position as an aristocrat in a technical, but not necessarily a practical, sense. She is constantly reminded by her uncle and aunt that marriage is a difficult prospect for her because she would need to marry her social equal in order to maintain her standing, but virtually any man who is her social equal would never marry her because of the potential scandal that her race would cause. Yet, all this talk about her standing is really only symbolic since even behind the closed doors of her uncle's home, she's kept segregated and treated as though she occupies some nebulous position between aristocrat and servant. When John is invited to stay for dinner and questions why Dido would be dining alone rather than with the family, she replies that while it can be socially proper for the son of a Vicar to be invited to dinner, it isn't proper that she should be invited. This begs the question, never really addressed by the film, of how things would be were she to marry Oliver, if her married status would earn her a place at the table, or whether her origins would continue to result in her segregation. Her "status" that everyone speaks of is meaningless because the society that is holding her to certain standards is also unprepared to treat her as an equal.

Belle has a lot of room for melodrama, but never succumbs to it, dividing its time between the political drama of the court case, and the social drama of two young women trying to secure marriages at a time when marriage was the only option for a woman. A career is impossible and the only alternative is to be the spinster aunt left in charge of running the household like their aunt, Mary (Penelope Wilton). Though this theme has been explored before in other movies set during this, or similar, time periods and social milieus, Belle's ability to explore it through the extra layer of race gives it some small quality of freshness, while the compelling performance of Mbatha-Raw, in a performance that finds just the right balance between passion and restraint, carries the film the rest of the way. She's supported in that regard by strong supporting performances, in particular from Reid and the always excellent Wilkinson. All in all, while Belle hits some familiar beats, it brings enough skill and newness to the table to make it worthwhile.
Posted by Norma Desmond at 8:00 AM

Great review. I have a soft spot for period pieces. I've been really wanting to see this one. It's from a perspective I've never seen before.

It definitely offers a fresh perspective on a familiar type of story.