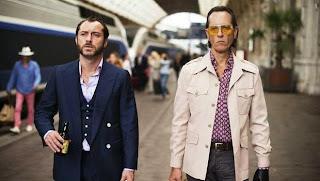 Most movies fade in from black. Richard Shepard's Dom Hemingway comes in from red and then comes charging at you as relentlessly as an angry bull. Its titular protagonist is a man who admits that he has anger issues and then proceeds to prove it in scene after scene whenever he's not too busy extolling his own awesomeness, which is so great that it takes on otherworldly proportions. It's funny, watching this film, to think that there was a time when Jude Law was stuck playing "pretty boy" roles because Dom Hemingway is anything but a pretty boy. He's violent, he's crass, he's deeply self-centered, and he provides Law with one of his most interesting roles to date.

Shepard introduces Hemingway in the midst of a sex act and while delivering an enthusiastic monologue about the virtues of his penis. After having spent the last 12 years in prison, he's looking to settle a few scores now that he's out, his first stop being to the man who married his ex-wife while he was in prison, whom he proceeds to beat to a bloody pulp. Next up he reunites with his friend Dickie (Richard E. Grant) and they head out to the French countryside, where Dom intends to collect what's due to him from his boss, Ivan (Demian Bichir), in exchange for not ratting him out to get a reduced sentence. Ivan is more than happy to repay Dom for his services but then, to Dickie's increasing horror, Dom gets drunk and belligerent, unleashing a tirade in which he continuously insults Ivan and demands that in addition to the money owing to him, he should also get to sleep with Ivan's girlfriend, Paolina (Madalina Diana Ghenea). When he sobers up, he's convinced that Ivan is going to kill him but instead Ivan agrees to forgive the outburst and Dom gets his money - but only for a brief, fleeting moment. A night of hard partying leads to a high speed joyride in one of Ivan's cars, which leads to an accident that leaves some members of the party dead, some injured, and one with an opportunity to take off with the loot.

Dom returns to London destitute and angry. After turning up drunk at the door of his now grown daughter, Evelyn (Emilia Clarke) and passing out, he awakens to discover that she's now married with a young son and has no desire to have anything to do with him whatsoever. As he begins trying to take steps to repair his relationship with her, he's also trying to resolve his financial situation by coming out of retirement and trying to get in with Lestor (Jumayn Hunter), who was just a kid when Dom went to prison but is now grown and in charge of his father's business interests. Lestor is less than pleased to see Dom, in part because Ivan was his father's rival and in part because he believes that Dom killed his cat, but ultimately agrees to give Dom a chance on one condition: Dom has to crack his electronic safe in ten minutes. If he succeeds, Lestor will put him to work. If he fails, Lestor will cut off the appendage he so lovingly rhapsodized about in the film's opening minutes. Ever confident in his abilities, and believing that he's due for some good luck, Dom agrees to the bet.

Dom Hemingway is a wildly entertaining film. It's so entertaining that it almost (almost) makes up for the fact that the film has no third act to speak of. Granted, it provides multiple second acts to try to fill the void (and breaks the story up loosely into chapters to try to disguise the crater at the end of the narrative), but the abruptness of the ending almost undoes the entire endeavor. There are three potential stories that Dom Hemingway could tell. One is the story of how his money is stolen out from under him and how he gets it back. One is how his money is stolen from him, forcing him to return to the criminal lifestyle and prove that he can still hack it despite the technological advances that have been made while he's been in prison. One is how his money is stolen from him, but he manages to regain his family. I would watch any of those films (I would be most enthusiastic about the first, least enthusiastic about the last), but the film ultimately chooses to tell none of those stories despite setting all of them up. Instead, after all that set up, it just sort of... ends, as if Shepard got to that part of the story, got bored, then wrote "And then it all works out. The End."

And yet, I recommend Don Hemingway because, as I said, it is entertaining. A lot of this comes down to Law who, as Dom, delivers a lot of profanity-laden monologues, preens like a peacock outfitted with tight pants and mutton chops, and acts like an unrepentant jackass without seeming insufferable (to the viewer, not other characters) while doing so (to give Shepard's screenplay some credit, this probably has much to do with the fact that Dom is pretty much continuously getting comeuppance throughout the film). Credit is also due to Grant, who plays Law's foil for much of the film, and turns looking aghast into an artform. It remains unfortunate that Dom Hemingway never quite comes together as any of the films that it potentially could have been, but it's perfectly serviceable as an actor's showcase surrounded by tons of style.
Posted by Norma Desmond at 8:00 AM