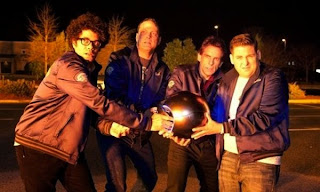 Sometimes timing is everything. On February 29, 2012 the first promotional materials for a science fiction comedy called "Neighborhood Watch" were released, just three days after the shooting death of Trayvon Martin would make terms like "neighborhood watch" and "stand your ground" key words in countless articles, and make race relations in the United States the most hot button issue of the day. On March 27th, posters and trailers for the film would be pulled from theaters in Florida as the controversy around Martin's death intensified, and by May 4th the film's title would be changed to simply The Watch before being released on July 27th, seven days after another tragedy in the form of a mass shooting at a midnight showing of The Dark Knight. The Watch had a lot of outside forces stacked against it before finally being released and promptly disappearing from theaters, and it would be tempting to call it a victim of circumstances except for one thing: it's original title isn't the only thing that will bring the Martin case, and the issues surrounding it, to mind.

The Watch is a celebration of white, middle class, suburban utopia: precisely manufactured communities, McMansions, and big box stores like Costco. It begins with its ostensible hero Evan Trautwig (Ben Stiller) giving an overview of his beloved town of Glenview, Ohio, the various clubs that he has started in an effort to create community unity, and the admission that he has no black friends currently, but hopes to have some in the future. Evan is the manager of the aforementioned Costco, which becomes the scene of a crime after the nightwatchman, Antonio (Joe Nunez), is killed in particularly brutal fashion. The murder, in conjunction with the incompetence of the local police, prompt Evan to start a neighborhood watch - alternately referred to as a vigilante squad and a militia by those it attracts - in which he is joined by Bob (Vince Vaughn), a construction worker who is fixated on his teenage daughter's social life, and in particular her relationship with her boyfriend; Franklin (Jonah Hill), a nut who wanted to be a police officer but failed the written, physical, and mental health tests; and Jamarcus (Richard Ayoade), who see the neighborhood watch as an opportunity to meet lonely housewives. Though the group is not taken seriously by those they've decided to "protect," and in fact are treated with outright hostility on a few occasions, they're soon thrust into the position of having to save the world after they discover that aliens have landed in their sleepy little town bent on destroying it - and the rest of the world for good measure.

The racial undertones of The Watch are hard to escape and sometimes aren't even undertones. In addition to the opening narration wherein Evan reveals that he has no black friends, when he first meets Jamarcus he reacts as if he's never so much as seen a black person up close before, and the fact that Jamarcus is played by the British Ayoade only serves to underscore the character's "foreigness." Then, once you begin to unpack the film's subtext, things only get more troubling. For instance, there are two people of color in the film who a) have names, and b) have lines of dialogue. One is Jamarcus and the other is Antonio. Antonio is a Mexican immigrant introduced just after receiving his citizenship, who proceeds to celebrate by lifting some booze from the Costco shelves and some pills from the pharmacy so that he can get high and goof off at work, and then gets killed by an alien. Jamarcus? Turns out to be an alien in disguise. So two people of color, one of whom is an alien in the immigration sense, the other an alien in the intergalactic sense, and now you've got three white dudes trying to eliminate the aliens who have infiltrated their neighborhood and ultimately having to run them out of the Costco, where they've set up their base, which allows Evan to utter what passes for the film's battle cry, "Costco is for members only." Replace the word "Costco" in that sentence with the name of their street, the name of their town, or even the name of their country. The Watch isn't a film that has the misfortune of having a premise that calls to mind a tragedy and its subsequent firestorm of controversy; it's a film that celebrates the very attitudes of segregation and distrust of otherness that made the Martin case such a powder keg.

It goes further. When they do battle with the aliens, armed courtesy of the private arsenal that Franklin keeps under his bed, they learn that the only way to kill the aliens is to shoot them in the genitals because, as Jamarcus explains, that's where their brains are. So Jamarcus, the one black character, who introduces himself by expressing his intention to get laid, who accidentally stumbles into an orgy with Evan and decides to stick around after Evan leaves, is literally an alien whose brain is located in his penis, because it's not like there's an ugly stereotype based on the idea of the "oversexed black man" or anything (though I suppose that in a perverse way you've got to admire the film for going all in on the racism after giving Antonio the "lazy Mexican" depiction). Incidentally, know who else is an alien who can only be stopped by destroying his junk (albeit played by a white actor)? The boyfriend of Bob's daughter. So if The Watch is read as an expression of white anxiety that the planned communities of the American suburbs are being invaded by people of color, then I'm left to assume that the reason angry white guys cling so loudly to the Second Amendment (is it ever anyone other than white guys in the news screaming about their guns?) is because on some level they believe that their guns are the only things standing between their daughters and the genitals of non-white men.

But just about any movie, even a terrible one, will possess a bright spot or two, and in the case of The Watch that comes largely in the form of Vaughn, who plays Bob like a labrador retriever alternately mystified and delighted by most things which come into his path, from 3D television to the Russian nesting doll in Evan's living room. Vaughan brings a zany energy to his scenes which almost drag The Watch into the realm of comedy, and in scenes where the four principal actors - Stiller, Vaughn, Hill and Ayode - seem to be just riffing off of each other, you get hints of how a successful film might have been built around the chemistry between the four of them. But The Watch never comes close to being that film.

Should It Have Been a Blockbuster?: I'm not sure that a film this problematic in this many ways should have been made, period.
Posted by Norma Desmond at 8:00 AM

This is one of the worst films I had ever seen in my life. What was really surprising was that it was made nearby my own neighbor and some places were shot in my old high school.

I was offended by how unfunny it was. Ben Stiller and Jonah Hill were doing their schtick as the latter is so much better. Vince Vaughn is just doing the same thing as it was just lazy. If I ever meet this guy in the streets, I want to fucking deck him.

Yeah, I'd say that in any conversation about worst films of all time The Watch deserves consideration.