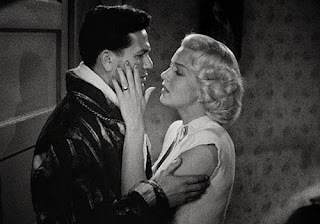 What goes around truly does come around in The Postman Always Rings Twice, as an act of violence comes boomeranging back on the perpetrators to even the score. "It's like you're expecting a letter that you're just crazy to get, and you're hanging around the front door for fear you might not hear him ring. You never realize that he always rings twice..." It's that second ring, that incident of karmic retribution, that closes the loop and brings this story of greed and murder to an unusually clean (for film noir) end. At the time it was made it was the third adaptation of James M. Cain's novel The Postman Always Rings Twice, and since then there have been two further adaptations, but there's a reason why Tay Garnett's version stands out from the crowd: it's pretty great.

A man, a woman, and her husband. There's no better equation for drama. The man is Frank (John Garfield), a drifter who hitches a ride with a man who turns out to be a District Attorney (Leon Ames), and ends up at the roadside diner run by the woman, Cora (Lana Turner), and her much older husband, Nick (Cecil Kellaway). In need of an extra hand for the business, Nick immediately offers Frank a job and Frank accepts, having immediately taken a liking to Cora. Cora, however, is cold to him at first, until he's able to break down her defenses. They fall in love and run off together, but Cora quickly sours on "life on the road" as her clothes become covered in dust and dirt and her shoes prove less than sensible for a journey on foot. She doesn't want to give up what she's gained through her marriage and start over again from nothing, so she talks Frank into returning with her and helping her kill Nick so that they can be together without losing the income generated by the diner.

Though Frank is against the idea at first, he comes around fairly quickly and he and Cora make their attempt on Nick's life, botching it so that Nick merely ends up in the hospital. Frank and Cora also end up on the radar of the police and the District Attorney, but despite this make a second, and successful, attempt on Nick's life, making it seem like he's been killed in a car accident. The District Attorney doesn't buy it and tricks Frank and Cora into turning on each other so that he can get the evidence he needs to convict them both for murder, but thanks to some clever maneuvering by Cora's lawyer (Hume Cronyn), Frank and Cora are able to slip out of the trap. However, while the two are plotting out their happy ending, fate is moving in to settle the score.

Although not quite as hard edged as another film noir classic based on a Cain novel (Billy Wilder's great Double Indemnity), The Postman Always Rings Twice is still a film which is shocking (given the constraints of the Production Code) for the explicitness of its sexual content and the somewhat sympathetic way the film views Cora and Frank. The two commit an act of evil, and the film doesn't excuse that, but it also depicts the feelings between the two as genuine. Unlike many other noirs where the femme fatale and the man caught in her web are joined by lust and then undone by self-interest, The Postman Always Rings Twice ends with Frank welcoming the death penalty because it means that he'll be reunited with Cora. Noir is known for drawing back the curtain and exposing the darkness that lies behind the polite veneer of society, but this plays out almost like a tragic romance between two desperate and not particularly bright people.

By the time The Postman Always Rings Twice was released, Turner was already a star, but this film is the one which really showed what she could do as an actress. Cora is a seductress (the film leaves no doubt about that in its introduction of her, which consists of a long and longing shot of her bare legs) and she's ambitious, but there's also something pitiful about her. Her ambitions are small - too small, certainly, to justify murder - and she seems painfully aware of how inept she is at pulling off the plot, at least judging by her total lack of poker face. It's a wonderfully nuanced performance that fits nicely with that of Garfield, who plays Frank as a simple, somewhat dim, guy felled by pretty face. The only real issue I have with the film is that it sags a bit in the middle, but in spite of that there's a reason why The Postman Always Rings Twice remains a classic: it's a deeply engaging and very well-made film.
Posted by Norma Desmond at 8:00 AM