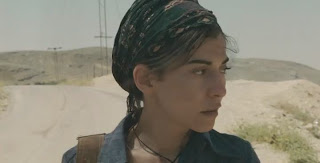 Denis Villeneuve’s Incendies has all the elements for a conventional thriller. There’s a mystery, a mission to unravel it, and danger which reveals itself only as the truth begins to come to light. Yet, Incendies is anything but conventional. By the time it reaches its final shot it has elevated itself to the level of Greek tragedy, telling a devastating story about circularity and the irrationality of violence. Based on the play of the same name by Wajdi Mouawad, this is an absolutely haunting piece of work that pierces the heart and takes root in your mind.

Incendies starts at the end of one story, that of Nawal Marwan (Lubna Azabal in a commanding performance), and the beginning of another, that of Nawal’s children, Jeanne (Melissa Desormeaux-Poulin) and Simon (Maxim Gaudette). Nawal has just died and when Jeanne and Maxim meet with Jean (Remy Girard), the executor of her will, they learn that on her deathbed their mother wrote two letters, one to the father they have never known, the other to a brother that they had no idea existed, and left instructions for Jeanne and Maxim to find the two men and deliver those letters. While Simon refuses to participate in what he sees as Nawal’s final act of insane behavior, Jeanne takes up the task, travelling to her mother’s homeland and beginning a search with what scant information she has. As she begins to untangle her mother’s past, she learns that Nawal spent 15 years as a political prisoner after assassinating a leader during the civil war and that, while imprisoned, she was repeatedly raped, resulting in a pregnancy. Distraught at this news, Jeanne begs Simon to join her overseas to help her put the final pieces of the puzzle together, not suspecting that the worst revelations have yet to come to light.

One of the most effective storytelling decisions in Incendies is that the film allows the audience to get a few steps ahead of Jeanne and Simon as they continue their journey, making Jeanne and Simon’s scenes seem all the more gut-wrenching because we know that the shoe is about to drop. For example, we know long before they do that their brother was not the child born in prison, that he was born before Nawal’s arrest and before the outbreak of the civil war, that he was the result of a love affair which prompted Nawal’s exile from her village. As we watch Jeanne learn of what her mother endured in prison, we know that the considerable pain she already feels is about to be magnified by the discovery that she and Maxim, not their brother, were born of rape, and later, when the twins discover the identity of their father, we have already long suspected it but hoped that it was only a red herring it is so monstrous. Because we’ve already been given time to ruminate on these revelations, our focus is not so much on the shock of them, but on the impact that they have on Jeanne and Simon and that’s all part of the exquisitely constructed tension that Villeneuve is able to nurture throughout the film.

On paper, the twists that Incendies takes might sound cheap and beyond belief, but I think that misses the point. Incendies should be taken as a metaphorical story, using a handful of characters who somehow keep encountering and connecting to each other in different landscapes and eras to explore ideas about violence. At the heart of Nawal’s story is a war driven by hatred that comes to seem more and more arbitrary as the dividing lines between “this side” and “that side” become increasingly ambiguous. At one point Nawal passes herself as Muslim in order to get a ride with refugees fleeing in a bus and then, when the bus is stopped by members of the Christian militia, she reveals herself to be Christian in order to escape the slaughter. Later, a character is revealed to have been trained as a child soldier by a Muslim warlord and to have fought passionately for that side until being captured by the enemy, retrained, and emerging as a notorious figure in charge of torturing those on the side he started on. The implication of all this being that if the distinction between one entity and another, whether it’s a religious or political group, is so negligible that people can move so easily between them, then they can’t be anything but wholly intellectual constructions. The supposed differences over which the two sides are destroying each other are not naturally occurring, but have been created into existence, making the hatred that drives so many of the acts in the film utterly irrational. The film underscores this notion through the tragedy that brings everything full circle and which serves to define war, its atrocities and reprisals, and reprisals of reprisals, as fundamentally self-defeating. You can’t inflict violence on someone else without also inflicting it to some degree on yourself and the point of the film’s final revelation is not in its shock value, but in how it expresses that divisive hatreds are things that human beings must talk and reason themselves into, because our more natural state is in being bonded together.

Over the course of the last 15 or so years, Villeneuve has slowly emerged as one of the great filmmakers working today, making three excellent French-language films (this film, 2000’s Maelstrom, and 2009’s Polytechnique), and now beginning to enjoy crossover success in Hollywood. In his work as a writer/director (he shares screenplay credit here with Valerie Beaugrand-Champagne), he has shown himself to be a master of creating compelling and nuanced characters for women, and here he has two. One is loyal and determined Jeanne, whose journey is shown concurrently with that of Nawal and proves her to be very much her mother’s daughter. The other is, of course, Nawal who, as played by Azabal is a pillar of strength, enduring unspeakable horrors and refusing to be broken until, finally, she shatters and falls away from the world when it reveals itself to be even more brutal than she already knew. It is an incredible performance that provides the film with its soul, and is so completely engrossing that you can’t look away even when the film is at its most difficult to watch.
Posted by Norma Desmond at 8:00 AM