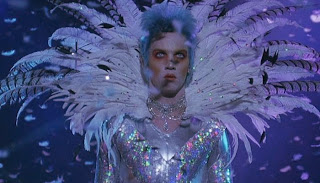 Todd Haynes has made a lot of films for grown ups, but his 1998 film Velvet Goldmine is a film that is best encountered for the first time during adolescence. Like The Catcher in the Rye, it's a work that you can appreciate as an adult, but which has the greatest impact if you're a teenager because it's so calibrated to speak to the ways that teenagers experience the world as a place full of both possibility and phoniness that puts the lie to the notion of possibility as they stumble their way through the building of their identities. Though it received mixed reviews and low box office on its release, it's a film that a lot of people seemed to have adored as teenagers (and which teenagers are apparently still discovering today). When you see it as an adult, it may have lost just a bit of its sparkle, but it remains an entertaining and engrossing film.

Taking the glam rock scene of the early 1970s as a backdrop, Velvet Goldmine is about the mystery of fallen idol Brian Slade (Jonathan Rhys Meyers). After an ill-conceived publicity stunt at the height of his career in which he faked his own assassination, Slade withdrew from public life and ten years after the fact journalist Arthur Stuart (Christian Bale) is tasked with finding out why. Arthur, once a fan of Slade's, was at the show and witnessed the "assassination" but now, so many years removed from that time in his life, is reluctant at first to take the assignment. In part this is because he doesn't want to have to look back at his own life during the period, which involved the sometimes painful discovery of his sexual identity, and in part it's because Slade's stunt seems to have ushered in the disillusionment that has taken root in Arthur. He found the music scene at a time when he most needed it, when he was desperate to find somewhere he could belong, and it was destroyed for him by the stunt, which made everything that was supposed to be true feel false.

It isn't until he begins interviewing some of the people who were once in Slade's circle that Arthur begins to feel the urgency of the story he's been assigned. He starts by interviewing Slade's original manager, who was cast aside when Slade signed on with Jerry Devine (the always welcome Eddie Izzard) and began to process of creating the persona which would bring him so much success. Arthur also interviews Mandy (Toni Collette), Slade's ex-wife and witness to so many important parts of Slade's evolution from hippy-ish singer/songwriter to glam rock god. Much of Slade's story concerns his relationship with Curt Wild (Ewan McGregor), an American rock star with whom Slade collaborates professionally and with whom he has an affair, the volcanic nature of the one relationship ultimately destroying whatever harmony existed in the other. Arthur also tries to interview Wild but the singer declines, which is just as well because as Arthur digs deeper, becoming more invested in the story as he begins to see connections between Slade and Tommy Stone, the current rock sensation, he's told that it's being pulled. Is it because there's no interest, he wonders, or because he's gotten too close to uncovering a truth that the powers that be would prefer to keep hidden?

In constructing his story, Haynes based his characters fairly blatantly on real people, with Slade standing in for David Bowie, and Wild a mashup of Iggy Pop and Lou Reed. Yet, like his 2007 film I'm Not There, this isn't really biography in the traditional sense. I'm Not There was a series of riffs loosely centered on the idea of Bob Dylan, while Velvet Goldmine is a fable (a fact underscored by the film's narrator, who speaks of "an unknown land, full of strange flowers and subtle perfumes") about sexual discovery that uses Bowie and the glam rock scene as a backdrop. Both are films that are more about ideas than literal facts, about how certain famous figures were and are interpreted within the fabric of pop culture and how audiences engage with them in those poses. As such, Velvet Goldmine unfolds for the most part in dream-like fashion, many scenes tinged with a hazy type of glow befitting the subjective recollections of the various storytellers within the narrative.

Velvet Goldmine is a film which very obviously came from a very personal place for Haynes, and as a result it finds its emotional core seemingly with ease. It plays around a lot with ideas about artificiality and the construction and theatricality of persona without itself ever feeling false, and it's anchored by two fine performance and one marvelous performance. The fine performances come courtesy of Rhys Meyers, who is solid but never even a fraction as charismatic as Bowie, and Bale, who manages the transition from wide-eyed teenager to disenchanted adult but who has since proved himself capable of far more nuance. The marvelous performance comes from McGregor, who brings a delightfully off-kilter energy to all his scenes while also tapping into something soulful and compelling. There's something very real at the core of both McGregor's performance and the film as a whole, which is why Velvet Goldmine retains its power, even if it doesn't quite maintain its luster from a distance.
Posted by Norma Desmond at 8:00 AM

Overall, I think Velvet Goldmine is a for a niche audience, like most of Haynes's work, and one who is invested in the time and the feeling of the time can find things to like, but for those of us looking for a compelling narrative, Velvet Goldmine doesn't have much to offer.
Evan McGregor and Jonathan Rhys Meyers. buy active instagram followers