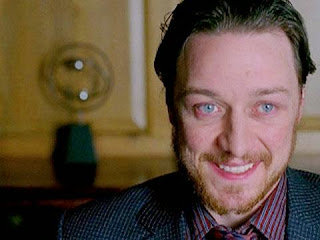 The current pop culture landscape is so littered with a certain type of "complicated" protagonist that repetition has made it difficult for that character type to remain remotely interesting. The angry white male whose assholery masks deep wellsprings of pain is a character type that has been bled dry in film and television in the years since Harvey Keitel perfected it in Bad Lieutenant, so it takes a particularly great story, or a particularly brilliant performance, to make such a protagonist seem anything other than utterly derivative. Jon S. Baird's Filth, based on the novel of the same name by Irving Welsh, has that brilliant performance courtesy of star James McAvoy, and it has a story that, while not necessarily great, is solid enough when it isn't wallowing in the familiar or careening wildly off the rails.

McAvoy stars as Bruce Robertson, a vicious Edinburgh Detective Sergeant whose life is a cycle of drugs, alcohol, manipulation of his colleagues, abuse of women, and just general misanthropy. As the film opens, he's angling for a promotion to Detective Inspector, which he believes is the key to repairing his marriage and getting his wife and daughter back. In order to accomplish his goal, he believes that he must sabotage the competition and begins undercutting and psychologically torturing his colleagues, including Ray Lennox (Jamie Bell), the younger member of the squad whom he has sort of taken under his wing. Bruce's chance to prove himself capable of being Detective Inspector comes when he's selected to take the lead on the murder investigation of a Japanese student, but his many vices (which includes a sadomasochistic affair with a fellow officer's wife) distract him from getting the job done and when he takes a short trip to Germany with his friend, Clifford (Eddie Marsan), he finds that his position as lead on the murder investigation has been taken over by Amanda Drummond (Imogene Poots).

Sensing that the promotion is slipping away from him, Bruce's tenuous grip on reality begins to loosen completely. In imagined conversations with his psychiatrist (Jim Broadbent), we learn that Bruce is bipolar and wracked with guilt over the death of his younger brother when they were children, and the hallucinations that he suffers from intensify the farther he flies off the rails. As his behavior becomes increasingly erratic, made more so by his efforts at self-medication, he risks not only losing the promotion but his current position as well, and it is revealed that his anxiety over losing his family has been expressing itself in a most extreme way. In an effort to maintain control over something, he torments Clifford in various ways, including by framing him as the culprit behind a series of harassing phone calls to Clifford's own wife (phone calls that Bruce himself has been making). Although Bruce starts the film as bravado personified, by the end he's reduced to a desperate man just trying to survive from one minute to the next.

It's impossible to talk about what works in Filth without discussing McAvoy's performance. At the beginning of the film Bruce is all ugly underbelly, sinking in vices, abusing his power, powered by entitlement, and angry at the world, which he feels has not given him all he is due, and by the end he seems utterly broken, undone by the very things which once seemed like the sources of his power, moving listlessly through what remains of his life like a dying, de-toothed shark. McAvoy manages this rocky transition seamlessly, guiding Bruce through his ugly highs and even uglier lows, and gives everything to the role, allowing Bruce to be utterly detestable without turning the less savory aspects of his personality into affectation. McAvoy is a consistently great actor, but digs particularly deep here, showing new sides of himself as an actor and an even greater range than he had already demonstrated in previous projects.

Filth is a vigorously directed film that borrows fairly liberally from the style of Danny Boyle, whose adaptation of Welsh's Trainspotting is one of the defining films of the 1990s, which works for the material but also can't help but feel just a touch too familiar. Filth depicts a lot of bad behavior, but none of it is particularly shocking and a lot of it plays as de rigueur for the depiction of this type of protagonist. This may not be fair, given that the novel came out in 1998 and thus Bruce pre-existed a lot of the characters like him, just not in film form, but the sense of familiarity, of the ground the story is covering already being well-trod, really can't be escaped. Filth is a film very much worth seeing on the basis of McAvoy's performance, but a lot of what surrounds that performance is too much of the same.
Posted by Norma Desmond at 8:00 AM