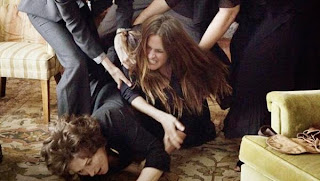 As Tolstoy said, happy families are all alike, but every unhappy family is unhappy in its own way. Few have been as intensely and vocally unhappy as the Weston clan, forced together against their will and then stuck in the claustrophobic atmosphere of the family home. With its heavy subject matter, a cast stacked with familiar names (and a few Oscar wins between them), and a theatrical release date that was smack in the middle of prestige season, August: Osage County is a film that has a lot of built in expectations, perhaps too many not to sink at least a little bit. I skipped this one when it was in theaters, as mixed reviews made it seem non-essential, and end of the year movie fatigue started to set in, but had I seen it in the theater I expect I wouldn't have liked it as much as I did seeing it now, without having to look through the "Oscar lens" that gets applied to almost every film released towards the end of any given year. Don't get me wrong: August: Osage County is not a great movie. But it's a solid, good movie.

The Weston clan - fierce matriarch Violet (Meryl Streep), wounded daughters Barbara (Julia Roberts), Ivy (Julianne Nicholson), and Karen (Juliette Lewis), Barbara's husband Bill (Ewan McGregor) and teenage daughter Jean (Abigail Breslin), and Violet's sister Mattie Fae (Margo Martindale), her husband Charles (Chris Cooper) and their son Little Charles (Benedict Cumberbatch) - are brought together when patriarch Beverly (Sam Shepard), an alcoholic who, in better days, was a poet of some renown, goes missing. Though they all come out to the family home, no one, at first, really takes Beverly's disappearance all that seriously. Violet is a difficult person, made all the more so by the cancer she's battling and the drugs she's taking like water, and the initial idea is that Beverly just needed some time away. The days stretch on, however, and after five days a sheriff arrives to advise that Beverly has been found and that he's dead, leaving a void in the family that it seems only rage can fill.

Tensions begin to come to a head almost immediately after Beverly's funeral. Barbara and Bill have secretly been separated for some time, a fact which Violet clues into and decides to reveal to everyone else at dinner, Karen has arrived with her new fiancee, Steve (Dermot Mulroney), who wastes no time in starting to circle Jean, and Ivy has been carrying on a secret relationship with Little Charles and plans to run off with him. Most important, though, is the question of what's going to happen with Violet. Although her tongue remains sharp enough to skewer anyone unfortunate enough to call attention to themselves, it's clear that with her illness and her drug dependency, she can't be left alone. Barbara and Karen have long since made their escapes from their hometown but now, with Ivy about to go start a new life elsewhere and Violet laying a guilt trip on Barbara, Barbara can see that everything is lining up to fall on her. As the members of the family start to jump ship one by one, it's left to Barbara and Johnna (Misty Upham), the caregiver hired by Beverly just before he left, to deal with Violet.

Adapted by Tracy Letts from his play of the same name, August: Osage County is at once a small and a big movie. It's small in that it's insular, as many movies based on plays are, though this film is the rare case where efforts to "open" the story up by bringing more variety in terms of the locations of scenes actually works against it, as the sense of the house, the family, the conflict, being inescapable is what drives August; and it's big in that there are a lot of big moments, rising up like jagged mountains from tense valleys. Those big moments are what marked much of the film's advertising and the clips used by awards shows and, out of context, they give the impression of the film being little more than an excuse to stage a scenery chewing contest for a bunch of great actors. In context, those moments feel more organic than that, like explosions of the tension that has been steadily building up in the preceding scenes, and the performances contain subtleties which surround the moments of flair that virtually every actor is afforded. All that got lost in the promotional materials for the film's theatrical release, which made it look like "ACTING! The Movie."

In truth, between the acting and the screenplay, the characters and their relationships emerge as well-drawn and compelling. One of the strengths of August: Osage County is the way that it brings the nuances of the various relationships into the light without necessarily acknowledging them. Ivy is the daughter who is taken for granted, dutiful and solid enough to be counted on if not necessarily desired, and lacking just enough for Violet to have something to pick apart whenever she's around. Karen is the forgotten daughter, or the one that Violet would like to forget, who can never be good enough or kind enough to inspire anything but Violet's vitriol whenever she lays eyes on her, perhaps because she's the only one of the daughters who never fights back in any way. Barbara is the favored daughter, the one that Violet wants most desperately to have around, because of an unspoken sense of competition with Beverly (and the world at large, really). Barbara was Beverly's favorite, so if she's Violet's favorite as well, then Barbara has the power to favor one or the other of her parents in return, and as mean as she is, what Violet really wants is adulation and affirmation. That can come from Barbara and no one else, and it can only come if Barbara stays in Osage County for Violet's sake. The actors play out these spoken and unspoken elements of their characters' relationships in superb fashion, providing a sense of history to the family which helps to contextualize the story at hand.

The toxic nature of the relationships in the film would be hard to take if it weren't for the darkly comedic bent that Letts favors, and which the actors play perfectly, giving August: Osage County the air of an amusing tragedy. Where the film falters is with the subplots, in particular that involving Steve and Jean which plays out in an abridged fashion that doesn't really pay off dramatically and seems to have been included merely as a narrative necessity in order to usher several characters out, and with its direction, which is bland and unimaginative in the hands of John Wells. Nevertheless, August: Osage County emerges as a solid piece of work, entertaining and sometimes affecting, and featuring a series of performances which run the gamut from good to great.
Posted by Norma Desmond at 8:00 AM