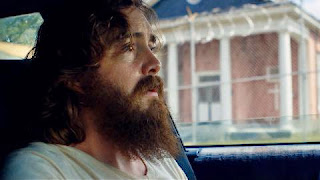 Lean and very mean, Jeremy Saulnier's revenge thriller Blue Ruin is a tale stripped down to the bare necessities. Although the film does not hold back when it comes to violence, including a grand finale that would seem at home in the most over-the-top action flick yet which is somehow made to fit with this film's small scale, it's ultimately a spare piece of work that wastes no time on anything that might be deemed extraneous. Everything that's here is something that needs to be here, and that sense of there being nothing left to lose helps make Blue Ruin the utterly engrossing film that it is.

Blue Ruin's man on a mission is Dwight (Macon Blair), living on the very fringes of society as the film opens and introduced after having broken into someone's home so that he can have a bath. When the police later come knocking on the window of the car he's been living in, he worries that it's because of the break in but the officer assures him that he's not in any trouble. Instead she's come to inform him that Wade Cleland, Jr., the man who murdered both of his parents, is about to be released from prison. Dwight accepts the news calmly and then promptly returns to his car where he begins to put into action a plan which has obviously been building within him for some time. He gets rid of the things he'll no longer need, takes inventory of the things he will need, and, most tellingly, takes out the new car battery and container of gas that have just been sitting in the trunk, waiting to be put to use. He also tries to get hold of a gun, but his best efforts fail him and he makes the long drive to Virginia to confront Cleland without a firearm. Fortunately, he has a knife.

Dwight's act of vengeance is swift and brutal, shocking both for how quickly it comes about and for how thoroughly unsuited Dwight is for the task that he's set himself. He succeeds in the kill, albeit in the least graceful way possible, but realizes almost immediately that he's bitten off more than he can chew. Visiting his sister (Amy Hargreaves) for the first time in years and confessing to her what he's done, he realizes that he hasn't closed the book with the Clelands, but merely ushered in a new chapter. After hustling Amy and her kids out of town, Dwight sets up camp in her house, waiting for the Clelands to come to extract their revenge. As he expects, they do come for him but he's able to get the upper hand - at least for the time being. Though sometimes inept, Dwight isn't stupid and he realizes quickly that this can only end in a bloodbath. All he wants to do now is make sure that his sister and her kids won't be dragged into it.

Blue Ruin moves fast and though it doesn't take time to explicitly explain a lot of the background details, that sense of history, of life beyond the edges of the narrative, comes through crystal clear nevertheless. I've already mentioned how the film conveys that Dwight has been planning to kill Cleland for years just by showing how quickly he's able to jump into action, but there's also the way that the film tells us everything we need to know about Dwight's relationship with his sister in one short scene where they go to a restaurant and Dwight tells her what he's done. The scene plays out like its own short film within the film, a family drama about a rock solid and responsible sister reaching her wit's end with her aimless brother even as she remains bound to him by their shared tragedy (think You Can Count On Me, though Dwight, for all the violence he commits, is much gentler and less rough around the edges than Mark Ruffalo's character in that film). In the hands of a less assured director, this scene (though it's a gem) might not have fit in with the overall tone of the rest of the piece, but because Saulnier always pulls back from the mayhem to bring the story back down to the characters, each scene fits seamlessly together. Moreover, while Blue Ruin ends in a crescendo of violence, it doesn't mute the Greek tragedy at the core of its narrative.

Though Blue Ruin has the ability to keep you on the edge of your seat, wondering what will happen next, it also proceeds with a sense of grim inevitability. What happens in the film has to happen in order to close the circle that the characters have become stuck in, and Dwight heads into his part not because he's the right man for this particular job, but because he feels he has no choice. One of the film's strengths is that Dwight is so often ill-suited for what he's doing. Unlike many movie characters, he's not someone who rises to every occasion simply because he's the star of a movie; he pulls off more than you might initially think him capable of, but for every success he experiences there's a failure, a bad decision, a costly screw up. The scenario that he's in is part of the heightened reality of the movies, but he has an air of reality to him. Blair, carrying the bulk of the film on his shoulders, plays Dwight with both quiet desperation and determination, as a man who has long since accepted his fate and no only needs to see it through. It's not the kind of performance that often gets awards, but it's the kind of performance which certainly should.
Posted by Norma Desmond at 8:00 AM