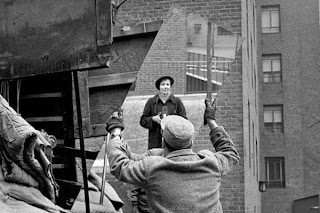 At the heart of Finding Vivian Maier is a question which, due to circumstances, is never going to be answered: why did a woman who spent her entire adult life tirelessly documenting the world around her take such great pains to keep herself separate and apart from the world? The intimacy of many of her photos is in stark contrast to the seemingly complete lack of intimacy in her life, and Finding Vivian Maier is as much about the mystery of Vivian Maier's existence as it is a celebration of the work she left behind. It's an intriguing story, made possible here by some incredible detective work by co-director John Maloof, and his good luck in purchasing what turned out to be a treasure trove at auction.

Maloof was setting out to collect photos for a history book when he came into possession of a box of old negatives which so impressed him that he began an odyssey of collection and a quest to discover the photographer behind the images. As he describes it, he didn't quite know what he had in the pictures, but he knew that he liked them and he began posting them online in order to share them, and began trying to find out what he could about the photographer. Vivian Maier had passed away by the time Maloof began his search, but he managed to find people who knew her (I use the term "knew" loosely) and were willing to tell him about her - though every bit of information he gets only seems to raise more questions.

For much of her life Maier worked as a nanny in a series of households (including, for a brief period, the home of Phil Donahue), and some of the adults who were in her charge as children describe an intensely eccentric woman with probable mental health issues (including, but not limited to, hoarding) who would bring them along as she took pictures in the worst parts of the cities where they lived. Many of the interviewees in the film (though, notably, mostly those who were her employers rather than her charges) describe her in terms which can probably be best described as affectionate; she was an oddball, but they liked her. But she also had a dark and abusive side, and the children that she cared for seem to have borne the brunt of that - or, at least, some of them. They unfortunately didn't participate in the making of the film, but towards the end of Finding Vivian Maier it is revealed that two brothers for whom she had been nanny took it upon themselves to support her in her old age by paying for her apartment, which suggests that she must have had a lighter side that sometimes kept the dark at bay. In keeping with this notion, the film paints a picture of Maier as a deeply complicated person, a woman who was plagued by undiagnosed mental illness (and, possibly, some form of sexual trauma in childhood or adolescence) which kept her isolated from others, but whose natural genius for taking pictures allowed her to create a connection to the world around her. That connection is forged primarily through the unvarnished humanity and immediacy of her photographs (many of which make it seem as if she just got right up into people's personal space in order to capture moments on film), but also through the number of self-portraits she took, which I think may suggest an attempt to fit herself into a world where she always felt out of place. Yet, despite the seemingly great need for it, the connection was ultimately fragile because Maier's intense need for privacy meant that her work was hidden from view until after her death, and the connection itself was a secret.

But even that picture isn't necessarily accurate, because Maier's existence was full of mysteries and contradictions. She spoke with a vaguely French accent, which some people who knew her were convinced was authentic, others convinced was affectation. Some describe her as having come to the States from the Alsace-Lorraine area, but in truth, as Maloof discovers, she was born in New York. Her mother was French, however, and Maloof uses two series of photographs taken ten years apart but depicting the same village to find where her mother came from, meeting a cousin of Maier's in the process. The interlude where Maloof travels to the village, revisiting the places Maier photographed, and talking to people who remember her, is one of the film's most charming, particularly when Maier's cousin brings out an ancient camera which he reveals to have belonged to Maier's mother (more questions, then, such as whether Maier adopted her obsession with photographing everything from her mother), and Maloof reflexively reaches for it only to have the cousin keep it teasingly out of reach. It's the film's most playful moment and it underscores just how unsolvable the question of Vivian Maier really is: she's always teasingly out of reach. Even the fact that Maier kept her work hidden during her lifetime isn't necessarily the case, as there's some suggestion that at some point Maier was looking to collaborate with a printer in the French village in order to get her work out.

Finding Vivian Maier is a strong effort overall, and certainly stirring to the imagination, but not without its flaws. For one thing, Maloof has a tendency to stand in his own way with respect to the film, taking up time with justifications for the fact that, a) he's thrusting Maier into a spotlight that she seems to have spent her life avoiding, and b) that he's making money from it. Maloof comes into the film in a defensive stance, which leaves you with the impression that this very good film could have gone the extra mile to greatness if only it had a little more distance from the man who, by possessing the art, controls the story. A more objective filmmaker, for example, might have interviewed some of the art world gatekeepers whom Maloof criticizes for not embracing Maier and her work because a more objective filmmaker would have nothing to lose by including those voices of dissent, while Maloof has an obvious interest in protecting Maier's work from criticism. Finding Vivian Maier is, ultimately, as much a work of promotion as it is a work of art in and of itself, but to Maloof and co-director Charlie Siskel's credit, it's a thoroughly engrossing hybrid of salesmanship and storytelling.
Posted by Norma Desmond at 8:00 AM

I love her photos. Amazing how she could go around New York and find so many people willing to be photographed.

It's especially amazing when you consider that she tended to gravitate to people on the margins of society. Though one of the people interviewed in the film points out that due to the type of camera she was using, some people might not have realized that their picture was being taken.