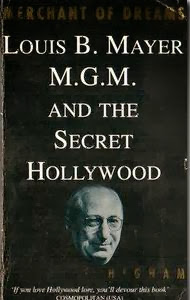 Well, that was... kind of a waste of time. I knew going into this one that its author, Charles Higham, was a controversial biographer (his biography of Errol Flynn, in particular, came under fire for its claims that the actor was a spy for the Nazis), but I still thought that the "biography" part would trump the "controversy" part. Merchant of Dreams starts out as a fairly straight-forward, albeit surprisingly sentimental, biography of M.G.M. legend Louis B. Mayer, then branches out to become what reads more like a series of collected anecdotes about the studio with Mayer as the connecting tissue, but not necessarily the subject. It's an odd book, dry as hell despite some of its more salacious (and, to be honest, not always believable) claims, and in which its central figure manages to come across as a jerk despite the author's very frequent assertions to the contrary and attempts to defend his sometimes bizarre, sometimes just mean behavior.

The first section of the book is interesting enough, detailing the Mayer family's emigration from what was then part of the Russian Empire to Saint John, New Brunswick, and then his move, as a young adult, to Boston where he quickly married and started his family and opened his first movie theater in a renovated burlesque house. Higham's account of Mayer's climb from single theater owner, to theater chain owner, to film distributor, and finally to producer is interesting, though as the book goes on the retelling of the various stock machinations and corporate intrigues gets a bit hard to follow. If Merchant of Dreams had a sharper focus and solely explored the business aspects of M.G.M. under Mayer without the frequent detours into gossip, it would have benefited greatly. As it is, by the time Higham gets around to the final salvos, in which Mayer, having been ousted from the studio in favor of Dore Schary in 1951, and now dying of leukemia, attempted to wrest control from Schary's successor, Joseph Vogel (an attempt which was successful but for the lack of a proper quorum at the board meeting), it's sort of difficult to care because the book has already been bogged down by so many characters and so many little tangents.

The problem with Merchant of Dreams comes down to two things. The first is how scattered it is once Mayer becomes head of M.G.M. and Higham begins padding the book with random stories about various figures tied to the studio. He tosses out little nuggets about, for example, the tumultuous relationship between Greta Garbo and John Gilbert, Robert Taylor and Barbara Stanwyck's marriage, and other behind the scenes bed hopping, but none of the book's large cast of characters emerges as a distinct person - even Mayer. As a narrative, the book reads more like a list of important events ("this happened, and then this happened, etc.") rather than as a cohesive narrative of any depth. Merchant of Dreams skims the surface of a lot of things, favoring a broad overview of the players at the studio in general rather than clear and detailed pictures of anyone.

The second problem with Merchant of Dreams is how closely Higham seems to identify with Mayer and how personally he seems to take the slights (imagined and factual) suffered by Mayer. Throughout the book Higham goes out of his way to praise Mayer for not letting his personal feelings about troublesome stars get in the way of the studio's bottom line - though, given that the popularity of those stars brought in the money which made Mayer the highest paid executive in the United States, I'm not sure how much credit he should be given for having the good sense not to cut off his nose to spite his face - yet when other people put personal feelings aside in favor of business to Mayer's detriment, it's characterized as a declaration of war. For example, when Mayer's son-in-law William Goetz threw a fundraiser for Democratic presidential candidate Adlai Stevenson (Mayer was a firm Republican who, at one point early in his M.G.M. tenure, made his employees donate to the Republican candidate) and ended up having to share hosting duties with Dore Schary, Mayer responded not only by disowning his elder daughter, Edie, but by disavowing Edie's grown children with Goetz as well: "Mayer cut off all interest in the Goetzes' daughters... When he saw [Edie's daughter, Judy, and her husband] in 1956 with their young baby, they called out to him, but he walked furiously past them and jumped into his waiting limousine. For some reason, Judy Goetz's husband, Richard Shepherd, found this surprising." Um... maybe he found it surprising because it's kind of psychotic to pretend that you don't know your grown granddaughter because your son-in-law, over whom she has no control, has the audacity to be a Democrat and to have hosted a party with your enemy.

No women in Merchant of Dreams come off particularly well, with Mayer's other daughter, Irene, being the subject of particular contempt on Higham's part. One of the more infuriating passages of the book: "Irene flew in from New York, acting, according to [Dr.] Jessie Marmorston's official biographer William Pashong, abominably... It was claimed by Dr. Marmorston that in that period Irene persuaded Mayer to alter his will, cutting out Dr. Marmorston's legacy of $250,000... There is no truth in the story; Mayer did not alter the will." So she's acknowledged as having lied about the will, but we should take her word for it that Irene Mayer behaved "abominably"? Throughout the book Higham writes about Irene Mayer as if he has a personal vendetta against her, which makes his accounting of the difficulties in Mayer's relationship with his daughter difficult to take seriously. In the end, that's actually how I felt about the book as a whole: it's hard to take seriously as anything resembling fact.

February's Book: TBD
Posted by Norma Desmond at 8:00 AM