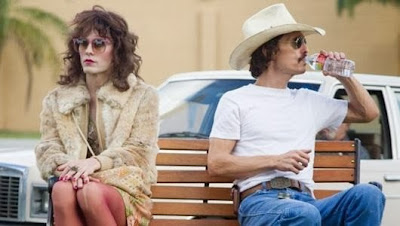 Like its protagonist, Dallas Buyers Club is all skin and bones, a lean piece of work without any fat to trim. Also like its protagonist, it prefers action to pathos, refusing to wallow in the misery of impending death (no matter how justified such wallowing might be, in the circumstances) and instead focus on those things which make life worth living in the first place. Based on the true story of Ron Woodroof, an electrician turned AIDS activist, the film unfolds in a sharp, unsentimental way, finding its groove in some familiar and comfortable tropes and letting the power of its subject speak for itself with a minimum of fussiness. Dallas Buyers Club is a solidly made film, old fashioned in some respects but definitely effective.

Beginning in 1985, Dallas Buyers Club follows Ron Woodroof (Matthew McConaughey), an electrician and rodeo rider whose life has been a long party which comes to an abrupt end after an accident at work lands him in the hospital and he's diagnosed with AIDS. Given only 30 days to live by Dr. Sevard (Denis O'Hara) and Dr. Eve Saks (Jennifer Garner), Ron at first refuses to believe the diagnosis, vocally insisting that since he's not gay it's not possible. With little time to lose, however, he quickly comes to accept the diagnosis and sets out to save his life, researching the illness and its still nascent treatment regimes. After being denied a spot on an AZT trial which Dr. Sevard is running, and Dr. Saks has serious questions about, Ron begins getting the drug under the table, mixing it with the rest of the drugs he takes regularly, including cocaine, and washing it down with booze. When his local supply dries up, he heads down to Mexico where he learns that the AZT does more harm than good, even without the added toxins he's been pumping into his body. He cleans up and heads back to the States, his car loaded with supplies from Mexico which he intends to use for his own benefit and to sell to others like him who aren't able to get treatment through the "proper" channels.

With the help of Rayon (Jared Leto), a transgender patient in the AZT trial, Ron begins dealing to local men and women infected with HIV and AIDS, but gets onto the government's radar and is threatened with arrest (this happens several times and, each time, is depicted with a touch of the darkest kind of humor: how much of a deterrent can the threat of jail be to someone who is already living on borrowed time?). After reading about "buyers clubs" in other cities started by AIDS activists determined to get the treatment to patients being denied meds, Ron and Rayon open their own branch, selling membership to the club and "giving away" the drugs to club members. The government continues to pursue them, trying to shut them down any way they can while Ron goes around the world gathering the supplies necessary to keep himself and those in the club alive. Though Dr. Sevard remains firmly on the side of the government and the pharmaceutical companies that are pushing their own treatment, Dr. Saks comes around to Ron's cause, bonding with him over their shared friendship with Rayon and over their mutual desire to push bureaucracy aside so that lives can be saved.

Written by Craig Borten and Melissa Wallack, Dallas Buyers Club possesses the sort of angry earnestness of films from the late 80s/early 90s dealing with the AIDS epidemic, making it feel like a bit of a throwback, although not necessarily in a bad way. Ron's fight is a righteous one and the film is driven forward by a strong current of anger, though it really only skims the surface of the long and often dirty fight between HIV/AIDS activists and the government to make AIDS research and treatment a priority (a more thorough depiction can be seen in last year's wonderful documentary How To Survive A Plague). Although its subject matter is very serious, it never feels bogged down by it and manages to balance out the darkness with small touches of humor, such as Ron's attempt to smuggle drugs across the border while disguised as a priest. Director Jean-Marc Vallée maintains a fine balance throughout, pulling the film back whenever it threatens to become heavy handed and giving the actors enough room to bring breadth to their characters.

McConaughey, having lost a considerable amount of weight for the role, is nearly unrecognizable as Ron - at least, physically. He brings the easy, laid back charm to the role that has brought him success in so many other roles, mixing it here with the rough edges of Ron's virulent homophobia, an element which softens gradually as Dallas Buyers Club goes on and Ron comes to know Rayon and other members of the buyers club. Although there are moments when Ron breaks down, he's not a character given to self-pity, channeling the energy he once spent on rodeo riding and skirt chasing towards his newfound activism, pushing hard at it because he knows that his time is limited, and defiantly facing his foes and his illness. That he outlives his original diagnosis by years seems almost as much an act of will as a result of his self-treatment. McConaughey embodies his character completely and his performance here is one of his most well-rounded and deeply felt. In the supporting ranks Leto turns in a performance which is good if not, to my mind, quite as profound as hyped, and Garner makes a fine showing in a largely thankless role which, nevertheless, allows her to bring the film one of its most authentic and visceral moments. In the end, though, Dallas Buyers Club is all McConaughey, and another fine film in the almost ludicrous run of good movies he's made over the past two years.
Posted by Norma Desmond at 8:00 AM