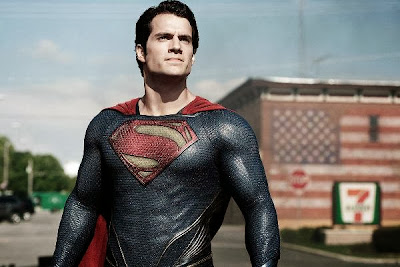 I don't have strong feelings about Superman one way or another, so in certain respects I'm probably the ideal audience for Man of Steel. I'm not going to get hung up on whether director Zack Snyder and writer David S. Goyer chose the "right" narrative elements from the comic to adapt to their film, and I'm not going to lose my mind over the climax (though I do think it's a shortsighted decision in terms of maintaining a franchise). I'm also not going to fixate on the high toll of destruction resulting from the fights between Superman and General Zod. I am, however, going to point out what to me is the single most objectionable thing about Man of Steel, which is the aggressive product placement. I'm not sure how much money Nikon, IHop, and Sears pumped into this production, but they were certainly rewarded with some pretty prominent signage. At this rate, it wouldn't surprise me if the forthcoming sequel is titled Pepsi Presents Superman vs Batman.

Man of Steel begins on Krypton, facing imminent destruction due to the depletion of natural resources, but also on the verge of a military coup by General Zod (Michael Shannon). The coup is stopped, but not before Zod kills Jor-El (Russell Crowe) and not before Jor-El and his wife, Lara (Ayelet Zurer) launch their newborn, Kal-El, into space, sending him to what they hope will be safety. Zod and his cohorts are banished to the Phantom Zone, and soon Krypton is destroyed, while Kal-El makes it safely to Earth and into the home of Jonathan (Kevin Costner) and Martha (Diane Lane) Kent. Thirty-three years later, Clark Kent (Henry Cavill), is trying to find himself, traveling around from place to place, moving every time he does something extraordinary which could only be explained by his not being of this planet. He eventually ends up in the Arctic, where the US military is investigating a mysterious craft encased in ice. The story also attracts intrepid reporter Lois Lane (Amy Adams) who, after the craft disappears and Clark along with it, keeps on the case, trying to find out who the mystery man really was. Meanwhile, Clark has finally discovered where he comes from, thanks to the preserved consciousness of Jor-El, which he's able to interact with on the Kryptonian ship.

When he makes contact in the ship, however, he also sends out a signal to Zod, who was released from imprisonment when Krypton was destroyed. Zod and his crew make their way to Earth, demanding that Kal-El be handed over to them, and Clark turns himself in to the military so that they, in turn, can turn him over to Zod. At the last second Zod also demands that Lois be delivered to them, for reasons which the film never bothers to explain (the film needs Lois to get aboard Zod's ship for story purposes, but there's no reason why the Kryptonians should want Lois). Once on board, the Kryptonians' plan to destroy humanity and take over Earth are made clear. Clark and Lois escape, but Zod begins terraforming Earth to make it more hospitable to Kryptonians - and eliminate humanity. Now calling himself "Superman," Clark sets out to stop the Kryptonians before it's too late.

Man of Steel is not without its flaws, mostly in terms of pacing and a general sort of shagginess to the narrative. The prologue on Krypton is a bit overlong (the first half hour or so plays out like "the mini adventure of Superman's dad"), as is the climactic between Superman and Zod, and the story crams a lot of elements in, from the Kryptonian origin story, Clark's discovery of that origin and his training arc, the budding relationship with Lois, and the struggle between his human side and his Kryptonian side. Snyder also pushes the Superman as Jesus allegory a little harder than absolutely necessary and eschews any kind of subtlety to ensure that the connection does not go unnoticed. By the end of the film, that element becomes a bit tiresome - but, then, by the time you reach the final of the film's 143 minutes, everything seems a little tiresome.

That being said, there's a lot about Man of Steel that I did like, much of it centering on the cast. Cavill is a solid choice for Clark/Superman, conveying heroism in a refreshingly unironic and sincere way, as well as his struggle to reconcile the two sides of himself, and Crowe, Costner and Lane all bring enough to the table to suggest how Clark is able to represent the best of both worlds. As Lois, Adams blends both spunkiness and a steely intelligence and determination, and the film's portrayal of that character was one of its most pleasant surprises. Lois isn't the token damsel in distress, but an active character with a sense of purpose beyond the story's romantic undercurrents. A fair bit of Man of Steel is "table setting" for future films, but if the characterization and casting remain this solid, and the storytelling gets tightened up just a bit, the future looks bright.
Posted by Norma Desmond at 8:00 AM