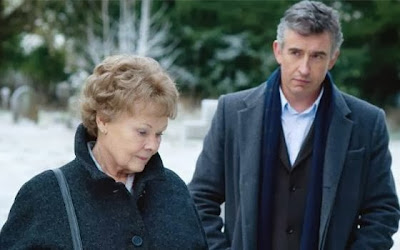 "Human interest" is a polite way of saying that something is soft, and a really polite way of saying that something is emotionally manipulative. The story of Philomena Lee is dismissed, within the film, as a human interest trifle and the film itself could easily have descended into that realm were it not for the sharpness of the screenplay by Steve Coogan and Jeff Pope and the direction of Stephen Frears, and the engrossing and affecting performance of Judi Dench. This isn't to say that Philomena is entirely free of the sort of sentimentality that marks human interest stories, but for the most part the film transcends those moments to become a truly effective drama.

Were it not for the anger inducing tragedy at its core, Philomena would have the makings of a comedy, what with the mixed matched duo of Martin Sixsmith (Coogan), an acerbic writer, and Philomena Lee (Dench), a gentle and unsophisticated woman with a story to tell. Martin makes jokes, Philomena takes them at face value; Philomena describes at length the plots of the romance novels she's been reading, Martin nods politely and stares into the middle distance while trying to block the descriptions out; Martin tries to bite his tongue while Philomena consistently informs everyone they meet that they're "one in a million." That Coogan and Dench have the settled comedic chemistry of a duo that's been playing off each other for decades only makes these moments funnier, but Philomena is very much a drama, and those moments of lightness merely balance the story's darkness and serve to make it more touchingly human. It begins with Philomena breaking her 50 year silence, confiding to her daughter about the son she had out of wedlock, who was taken from her while she was confined to a Magdalene asylum and who has haunted her memory ever since. When the daughter meets Martin at a party shortly thereafter, she asks if he'll tell her mother's story and though he's reluctant to do so at first, he comes around to the idea because he needs the work.

With the encouragement of his editor, Martin embarks on a journey with Philomena which takes them first to Roscrea and the convent where Philomena gave birth and spent years imprisoned in servitude, and then to Washington to follow the trail of her missing son. In Roscrea all records have been "lost in a fire" (except, as Martin angrily notes, the contract Philomena signed giving up her child), but after learning that many children adopted out of the convent were adopted by American parents, Martin uses his contacts in Washington to shake out some leads. Almost as soon as they arrive in the States, Martin and Philomena find her son, but learn that he's been dead for several years. Although at first Philomena just wants to retreat home to deal with her devastation, she decides to stay and talk to people who knew her son, and as she and Martin continue their journey they discover new layers of betrayal and corruption on the part of church officials.

With its story rooted in wrongdoings of church officials and institutions, Philomena has come under fire for being anti-Catholic, but I think that's a facile and tellingly defensive reaction. Magdalene asylums existed and they kept "fallen" women in conditions which can only be called slavery. In the film as in real life, Philomena is incarcerated in the convent, separated from the outside world by bars and locks, forced to labor on behalf of the convent without pay, able to leave only if she could somehow raise £100, made to sign a contract relinquishing her rights to her child, and allowed to care for her son in small increments for about three years until the convent sold him to an American couple (technically speaking, the money that changed hands was a "donation," rather than a purchase price, but... c'mon). And that's all aside from the church-led culture of shame and punishment surrounding women (while absolving men), designed to keep them subservient. What about any of that should any sane person not criticize? I'm not a religious person myself, but I don't believe that you show devotion to a religion by ignoring evil acts done in its name. You show devotion to a religion by wanting to protect it from being corrupted by those who want to manipulate its tenets in order to consolidate and increase their power, and you do that by calling attention to and criticizing that corruption and demanding that it be excised. Philomena is critical of corrupt aspects of Catholicism as an "establishment" - of the institutionalized misogyny, the seizure of agency from women, the emphasis on silence and the lengths gone to in order to cover up misdeeds - but it isn't critical of Catholicism as a religion. Throughout the film Martin criticizes the religion only to have Philomena comes back at him with a counterpoint, and she herself remains positive (save for a moment of doubt here and there) about the religion. The fact that the film's climax has Philomena finding it in herself to forgive the nun who becomes, in the story, the de facto face of church corruption, is itself an affirmation of the religion. It isn't an easy thing for her to do but she believes it is the right thing to do because she still believes in the tenets of the religion, and her victory, ultimately, is that she doesn't let those who have used the religion as a means for evil rob her of her faith and what she knows to be good in the religion. Seems pretty pro-religion to me.

Although Philomena sets up the relationship between Martin and Philomena as one of a worldly middle aged man and a simple elderly woman (and, certainly, that's the view Martin takes of himself and Philomena when they first set out), neither the film, nor the actors, are content to let it rest there. Philomena is an open person and a kind person, but she's no idiot and understands more than she's sometimes given credit for, and Dench's performance digs deep into the character. In a career full of great, rich performances, this is one of her best, lacking in any kind of performative fussiness and instead relying largely on moments of subtlety and inward reflection. Her performance is incredibly moving while also often being very funny and, while she hasn't exactly been lacking in recognition over the last 15 or so years, performances like this suggest that she may still be underappreciated for her gifts. With her note-perfect performance anchoring it, Philomena can't help but rise above any genre trappings it might otherwise have fallen into.
Posted by Norma Desmond at 8:00 AM