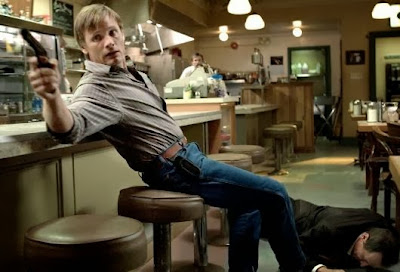 Violence is something at once abhorred and glorified. The taking of a life in an act of crime is the most grievous of offenses, but the taking of a life in self-defense is something often, even if only implicitly, celebrated. David Cronenberg's 2005 masterpiece A History of Violence skillfully mines this contradiction, focusing on a protagonist who is at once a bad man who kills for bad reasons, and a good man who kills for good reasons. The question isn't whether the man can be reconciled to the two parts of himself, but whether society, whose quaint image belies a foundation of and continuing capacity for violence, can reconcile itself to the fact that the two can exist in one.

The man in question is Tom Stall (Viggo Mortensen), who lives a quiet, idyllic life in Millbrook, Indiana with his wife, Edie (Maria Bello), teenage son Jack (Ashton Holmes), and young daughter Sarah (Heidi Hayes). He owns a diner and is known and liked throughout town, a good man surrounded by like-minded, good people. That changes when two men attempt to rob the diner and threaten to kill one of Tom's waitresses, resulting in Tom killing them both. He's hailed as a hero for the act and his face is splashed all over the news, though he protests that he did nothing special and that he just wants to return to his quiet life with his family. His newfound celebrity draws the attention of Carl Fogarty (Ed Harris), who comes to Millbrook to get a look at Tom and begins talking to him about Joey Cusack, a man Tom claims not to know, let alone be. Fogarty continues to harass Tom, eventually resulting in a standoff on the Stalls' front lawn which ends with Fogarty and his two henchmen dead, and Edie and Jack keenly aware that the man they thought they knew is a stranger to them.

Tom was once Joey Cusack, brother of Philadelphia mobster Richie Cusack (William Hurt), and a man who killed as an occupation and as a hobby. His admission of this fact rocks Edie, who stands by him enough to stop the local sheriff from asking questions, but can hardly bear to look at him otherwise, and Jack, who begins to question the values he thought he thought his father represented. "In this family, we do not solve problems by hitting people," Tom states after Jack gets into a fight at school, and to which Jack replies, "No, in this family we shoot them." The die has been cast and there's no returning to the blissful ignorance that once marked the family. Isolated within the family unit, Tom is at a loss for what to do next until he receives a phone call from Richie, demanding that he return to Philadelphia to settle their outstanding issues. Tom sneaks off in the middle of the night, driving to Philadelphia, hoping to make peace with his brother, but on guard for whatever else may come.

A History of Violence was the first in what has proven to be a very fruitful collaboration between Cronenberg and Mortensen and it shares more than a little in common with what would be their next film, Eastern Promises, in which Mortensen plays the mirror image of his character here, a man hiding his true past and self in order to play the role of a mobster. Whether "Tom Stall" is a role or not is up for debate - by the time his past catches up to him, he's been Tom for about as long as he was Joey - but, certainly, the violent man he once was has never been far below the surface. The thin line between order and chaos is set up from the beginning through a strategy of deliberate artifice that Cronenberg uses at the beginning of the film as he depicts the Stalls, whom we meet for the first time as they gather round Sarah after she has a nightmare, an overly idealized vision of family right out of Norman Rockwell. It's an image that cannot be sustained, and the mournful, haunting image at the film's close underscores that - once the curtain is drawn back, it can never be fully closed again; the violence, once acknowledged, can never again go unacknowledged.

Anchoring the story is Mortensen's fantastic performance, which creates two noticeably different characters in Tom and Joey. There's a moment during the course of his standoff with Fogerty and his men when the switch is visably flipped, the transformation conveyed entirely through Mortensen's eyes and carriage. That the performance went almost entirely unrecognized is astounding, though at least co-star Hurt fared better. It had been a while since I'd seen A History of Violence and I'd forgotten just how off-the-wall and crazy (in a good way) Hurt's performance here is. His arrival completely, though briefly, changes the tone of the film, giving it a essential sense of volatility and off-kilter energy. Although the scenes involving Hurt comes this close to feeling like they belong in an entirely different movie, Cronenberg has a firm enough handle on it to make it work, turning it into just another fascinating aspect of what is a truly great film.
Posted by Norma Desmond at 8:00 AM