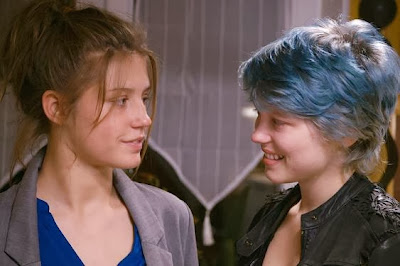 Perhaps 2013's most written about film, by the time it hit theaters Blue is the Warmest Color already had an exceptionally heavy burden in terms of the sheer weight of external issues resting on its shoulders. From the sex scenes which dominated the conversation, both in terms of their length and explicitness, to the feud between director Abellatif Kechiche and star Lea Seydoux which, in the immortal words of Ron Burgundy "escalated quickly," the film hasn't had a moment to exist free of controversy. Yet, when you clear all of that away and simply look at the film what you're left with is a work of emotional honesty, messy around the edges as life itself is messy, raw, intense, and utterly heartbreaking.

Spanning several years in the life of its protagonist, Adele (Adele Exarchopolous), Blue is the Warmest Color begins with her at the age of 15, as she negotiates the emotionally fraught territory of dating and peer relations. Shortly after embarking on a brief, and ultimately unsatisfying, relationship with an older boy from her school, she's left thunderstruck when she locks eyes with a blue haired young woman while crossing the street. She's intrigued by the woman and, after a kiss with one of her friends, seems to undergo a sexual revelation, but when she attempts to pursue more with her friend, she's told that it was just for a joke and didn't mean anything. Dejected, she becomes withdrawn and her friend, Valentin (Sandor Funtek), tries to cheer her up by taking her dancing at a gay bar. However, while Valentin is dancing with his friends, Adele slips out, following several women to another bar where she has another encounter with the blue haired woman, an art student named Emma (Lea Seydoux). The two become friends and, eventually, lovers.

Years later, Adele and Emma are living together, Adele working as a primary school teacher, and Emma on the verge of her breakthrough as an artist. Although deeply in love, their relationship has begun to show fissures: the class differences that were apparent at the beginning of their relationship have become more deeply ingrained over time, Emma is frustrated by the fact that Adele remains closeted, and Adele is jealous of Emma's friendship with Lise (Mona Walravens), a fellow artist. Lonely and isolated, feeling increasingly distanced from Emma and unable to move within her world of artists and well-to-do philosophers, Adele gives in to the overtures of a male colleague and has a brief affair with him which brings her relationship with Emma to a swift and brutal end. Three years later Adele and Emma meet again, changed in many respects, but in other ways the same. For Adele this meeting is her hope for the future, but it may be far too late.

At just under three hours, Blue is the Warmest Color is epic in length, but intimate in scale, exploring Adele's life in minute detail. The film is deeply interested in Adele's evolution as a person, how she's affected by her burgeoning sexuality, how her relationship with Emma at once frees and confines her, how nebulous her sense of self is as she emerges from adolescence into early adulthood. Kechiche is keenly interested in the small nuances of a changing life and, although the more sensationalistic aspects of the film are what has been most discussed, when considered within the larger context of the film as a whole, those aspects seem far less sensational. The sex scenes, though graphic, are not without purpose; they exist to show the depth and intensity of feeling between Adele and Emma in the early part of their relationship, an insatiable need for each other which seems to have dissipated (at least on Emma's side) as the years have carried on. Blue is the Warmest Color isn't really a love story in the traditional sense, but a story of how a young and intense love can cool as both parties grow up and apart. That the story will take that turn is hinted at from the beginning, as Adele and her high school class discuss the novel The Princess of Cleves which, like the film, is about two people who fall in love when their eyes meet across a distance, whose love is undermined when one believes the other to have been unfaithful in their affections, and who are eventually parted with one eventually falling out of love with the other.

Blue is the Warmest Color has been characterized as a "lesbian movie" by many, however, the film's interest in sexuality is ultimately minimal. The film is far more interested in the issue of class, and though Adele's internalized homophobia plays a role in the break up of the relationship, the far more pressing issue is that Adele and Emma come from different worlds and remain in different worlds throughout their time together. Adele is from a working class background and has been raised to be concerned about financial stability, while Emma is from a far more privileged background that affords her the luxury of pursuing her artistic ambitions without worrying how it will affect her economic security. Adele becomes a teacher because she knows she can make a living at it, though she also happens to love it and believes she makes a difference by doing it, but to Emma, that occupation is a cause of simmering frustration. She would prefer Adele to have artistic ambition and encourages her to attempt to make a living at writing, and Adele's lack of interest in that direction is a measure of the distance that has grown between them over the years. Meanwhile, Adele can find no place for herself in Emma's circle of friends who, like Emma, come from privilege and prefer to discuss abstract, philosophical issues, rather than more pressing social issues that have concerned Adele since her early days of activism in high school.

In the lead role, Exarchopolous gives an unaffected, emotionally naked performance. For much of the film, Adele is like an open wound, her thoughts and feelings playing across her face, announcing themselves through her body language, her sexual appetite expressed literally as well as figuratively through food. Because I just recently read The Corrections, I was reminded of a line from that novel while watching the movie (a line which, incidentally, is about a similarly sexually fluid and hungry character): "My God, the way she eats." Food is inextricably linked to Adele's sexuality throughout the film, from the granola bars she keeps under her bed and indulges in as she struggles to understand her sexual dissatisfaction with the boy from school, to the oysters she has the first time she meets Emma's parents and likes despite earlier protests, to the spaghetti dish she makes for a party for Emma, the same dish they have the first time Emma meets Adele's parents and Adele passes Emma off as her platonic friend and tutor - beyond the walls of their shared home Adele remains as closeted as she was when they first got together. The film is very much about what Adele hungers for and how she feeds herself - literally, sexually, emotionally, intellectually. Adele drives the narrative forward, and Exarchopolous is more than up to the task of carrying the film, her vulnerability perfectly matching the cool confidence of Seydoux's performance as Emma. The two performances are so note perfect that it's nearly impossible to imagine any other actors in the roles, and despite the behind the scenes and post-production drama, it's just as difficult to imagine the story in the hands of another director. Blue is the Warmest Color is a masterpiece.
Posted by Norma Desmond at 8:00 AM