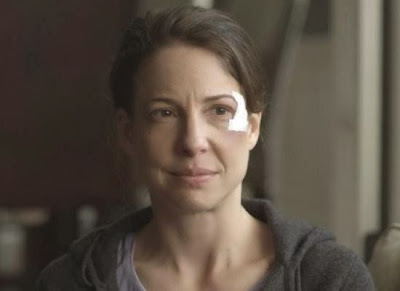 "I'm 42, something has to be me by now." So says the protagonist of Stacie Passon's Concussion late in the story and in a line suggestive of a slightly more self-reflective film than this one turns out to be. Certainly the film plays with questions about identity, but it remains vague around the edges, its protagonist almost as unknowable at the conclusion of her adventures as she was before they began. To the film's credit, it's never as sensationalistic as its premise - suburban wife and mother suffers concussion, becomes prostitute - might allow, but while it commits to that premise, it never really overcomes its more ludicrous aspects. That said, Concussion, while not wholly successful as a film, is a sometimes thought provoking one with a great performance at its center.

Concussion begins with the life altering event of its title, with protagonist Abby (Robin Weigert) being rushed to the hospital after her son hits her in the head with a baseball. While the superficial marks of the injury fade relatively quickly, the event seems to have shaken something loose in Abby psychologically, causing her to take a scrutinizing look at her life - at her perfect suburban home where everything is neatly ordered and just "so," at her passionless relationship with her wife, Kate (Julie Fain Lawrence), her work renovating and flipping houses - and finding it lacking. In particular, the injury seems to awaken a sexual hunger which drives her to two encounters with prostitutes, and then to enter into a part-time career as a prostitute, aided by her contractor, Justin (Johnathan Tchaikovsky), whose girlfriend is working her way through law school by running an escort agency.

Working under the name Eleanor, and insisting on meeting each client for coffee before proceeding to have sex with them, Abby soon develops a rotation of regulars (all women), one of whom, to her surprise, is Sam (Maggie Siff), a seemingly happily married woman from Abby's community. Although she's successful in keeping her double life going for a while, fissures begin to form which make the division between Abby and Eleanor unsustainable. Abby forgets to pick the kids up from school, something she's never done before, she's reluctant to sell the loft she and Justin have been fixing up and out of which she's been working as Eleanor, things are weird between her and Sam when they run into each other outside the context of Eleanor and client, and Kate begins to grow suspicious. That Kate will discover Abby's secret - in its entirety or only in part - seems a given, but what happens next is not necessarily so obvious.

Although Concussion plays like a film about identity and self-discovery, I think it's much more interesting as a meditation on the nature of privilege. Although Abby and Kate aren't wealthy per se, they're certainly comfortably middle class, comfortable enough that Abby's work is framed more as a hobby than a job, one of several things that she and other wives in their community do to keep busy. She sees two prostitutes at the beginning of the film, the first of whom is a woman she contacts through an escort ad in a paper, a woman she meets in a seedy motel, who offers her drugs, and whom she later describes as "dirty." The second woman is from the escort service that Abby herself eventually joins, is more put together and "professional" and conforms to a romanticized vision of transactional sex. Abby, likewise, will conform to that romanticized vision and the contrast between the depiction of her work as a prostitute and that of the first prostitute brings the issue of privilege into sharp relief. For the first woman, prostitution is an issue of economic necessity. Abby not only doesn't need the money she makes as a prostitute, she doesn't even seem to think about it. For her this is an issue of satisfying a sexual need, and her clients are similar to herself, women who are economically stable but sexually unsatisfied. Sexual fulfillment, then, becomes the entitlement of those who can afford it, an object of exclusive availability, denied to those on the lower end of the economic spectrum.

Concussion raises intriguing questions, but it ultimately never digs very deep. What really makes it worth watching is Weigert's performance, which lends the film much of its complexity. Abby's restlessness, her feelings of loneliness and isolation, come across full force and Weigert easily guides Abby through her shifting personas. Eleanor is not just an alternate identity, but a series of alternate identities, each one specific to her various regulars. That this works, that Abby is consistent beneath all her guises, and that the depiction successfully balances a sense of control against a sense of rudderlessness, is a testament to Weigert's performance. The film itself isn't as strong as that performance, but it's an interesting piece of work even if it doesn't quite gel as a film.
Posted by Norma Desmond at 8:00 AM