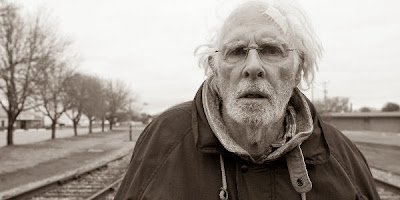 Although the plot of Nebraska is driven by the promise of a financial windfall, the film itself is really about the little things. It's about a having a new truck, getting a new air compressor in order to replace the one loaned to a friend 40 years earlier, and enjoying a moment of getting to "be somebody," somebody important, after enduring years of life kicking your ass. The victories to be found here are small, but they are victories nevertheless. Anchored by a great, less is more performance, and a solid, straight forward performance from an actor best known for broad comedy, Alexander Payne's latest film is a magnificent portrait of a man mentally slipping away, and the family struggling to cope.

Nebraska begins with broken, alcoholic Woody Grant (Bruce Dern) attempting to walk from Billings, Montana to Lincoln, Nebraska. His journey is prompted by the receipt of a sweepstakes certificate informing him that he's the winner of a million dollars, and no matter who tries to convince him that it's just a scam, he's just not hearing it. After several attempts to make the trek which leave his wife, Kate (June Squibb), completely exasperated, the younger of his two sons, David (Will Forte), decides that he'll take a couple of days off work and drive him. David's reasons for doing so are at once simple - he wants Woody to see for himself that there's no million dollars so that he'll stop talking about it and stop trying to walk to Nebraska - and slightly more complex. Having just broken up with his long term girlfriend, he's come to realize that his life has been in limbo, that he's marking time but not really living. Sure, his trip with Woody is a fool's errand, but at least he's finally doing something and maybe he'll finally be able to get to know his father, a remote figure who has never quite seemed to be "there," lost to his drinking and to the unnamed ghosts of his past.

Almost immediately, the trip comes to a screeching halt when Woody takes a drunken fall and splits his head open, resulting in a hospital stay. David tells him that due to the delay they aren't going to make it to Lincoln, but that they have time to stop off in Woody's home town and visit with Woody's siblings and their families. Woody is uninterested in revisiting the past but gets dragged there anyway, staying for a few days with one of his brothers, and gravitating towards the local tavern where, despite David's advice that he keep quiet about his "prize," he tells all to his former friend and business partner Ed (Stacy Keach). Word quickly spreads through the small community and then the vultures begin to come out. Family members at first stare at Woody with awe but then progress to demanding their "share" of his windfall, and Ed makes it clear to David that he expects the family to settle up with him for the financial misdeeds he claims Woody committed when they were still partners and his drinking was particularly bad. Into this Kate and older son, Ross (Bob Odenkirk) arrive, briefly forming a united family unit as they try to protect Woody from those around him, as well as from himself.

Filmed beautifully in black and white, Nebraska has an evocative, mournful tone and Payne juxtaposes of the openness of the landscape against the closed faces of the characters to great effect. The characters seem stranded in all that space, a state of being which mirrors Woody's mental state. While we get the sense that he's never been much of a presence in the lives of his family members, he's even more isolated and remote now as his mental faculties are degenerating. Dern's performance is spare with respect to dialogue, the character having retreated inward after traumatic experiences fighting in Korea, and years of alcoholism thereafter. His is a performance that comes across almost entirely in body language and facial expression, but the distant nature of the character doesn't make the performance any less engaging. There's a moment late in the film when Ed invites himself into a conversation with David and Woody and reveals a secret about Woody, and Dern just looks so defeated that it's utterly heartbreaking. There's also a lot at play in that moment, from his humiliation at having this thing from his past exposed to David, his shame at what David must think of him, but also perhaps a bit of regret for how things might have been different. Woody is not an easy man, but there is so much humanity in Dern's performance that it's difficult not to feel sympathy for him. Although he's making a trip to collect a million dollars, what he's really after is a moment of dignity which is continuously denied to him - until, finally, it isn't.

If Nebraska weren't such a strong film overall, the sentimentality of the ending would probably kill it for me but, because I enjoyed the film so much, I can see past it (it also helps that having seen all his features, I sort of expect Payne to go for the "soft" ending). Nebraska is the first of Payne's features which he did not have a hand in writing (writing credit goes to Bob Nelson), but this is probably his strongest effort as a director and visual storyteller. The supporting ranks are filled with colorful characters, from Squibb's tell-it-like-it-is Kate to Keach's menacing Ed to Woody's Tweedle Dee and Tweedle Dum nephews, as well as quieter, more understated characters drawn from small towns everywhere, and the dialogue, like the overall tone of the film, alternates easily between funny and tragic. Election is probably always going to be my favorite of Payne's films, but Nebraska has safely nestled itself into the runner-up position.
Posted by Norma Desmond at 9:07 PM