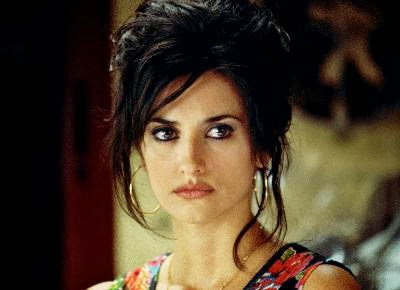 Few male directors have been as good to women as Pedro Almodovar, who has crafted many films either centering directly on or filled out with interesting, complex female characters. With his triumphant drama Volver, he creates one of his most compelling protagonists in Raimunda, a hard working woman whose past comes back to haunt her, first in the form of her own teenage tragedy being mirrored in the experience of daughter, and second, and more literally, in the form of her deceased mother. Penelope Cruz shines in what is arguably her finest performance to date, gamely following Almodovar through the shifting tones and genres of the film, which nimbly moves from tragedy to farce with elements of magic realism and melodrama mixed right in. The mixture makes for a potentially volatile concoction, but in the hands of a master, it becomes a masterpiece.

Volver is a film with death on its mind, but its focus is not so much on the end as it is on what happens after the end. It opens with Raimunda (Cruz), her sister Sole (Lola Duenas), and daughter Paula (Yohana Cobo) cleaning the burial plots of Raimunda and Sole's parents, surrounded by other people doing the same for their departed loved ones and by Agustina (Blanca Portillo), the neighbor of Raimunda and Sole's elderly aunt, Paula (Chus Lampreave), who attends to caretake her own burial plot in accordance with the tradition of the village. Caring for the dead is just another part of life in the village - but, as Sole discovers after Aunt Paula dies, the dead taking care of the living is also part of life. Irene (Carmen Maura), Raimunda and Sole's mother, has been caring for Aunt Paula for years, unseen by the rest of the village, and now that Aunt Paula is gone, she sneaks to Madrid with Sole, determined to resolve that which was left unresolved at the time of her death. These unresolved issues center on Raimunda, from whom Irene was estranged at the time of her death, and whom she is now afraid to reveal herself for fear that Raimunda still hates her.

Raimunda, meanwhile, has her own death related issues to deal with, as she comes home one day to discover her husband dead, with Paula revealing that he had attempted to rape her and that she stabbed him in self-defense. Paula's trauma is an echo of one suffered by Raimunda as a teenager and, in her determination to do better by her daughter than her own mother did for her, she cleans up the bloody mess and then stores the body in the freezer of the restaurant next door until she can figure out how to properly dispose of it. Before she can do so, however, a business opportunity presents itself in the form of a visiting film crew that wants to rent out the restaurant for their meals. Pretending to be the owner (the real owner is a friend of hers who has just left town and is trying to sell the building), Raimunda begins raking in the cash, but her focus is continuously pulled from her attempt to reinvent her life and towards the specters of death - the body in the freezer, the ghost of her mother, and the now terminally ill Agustina, who is convinced that her own mother's disappearance is somehow connected to the death of Raimunda and Sole's parents. "Volver" means "to go back" and there's no way forward here without first going back, back to the deaths of Irene and her husband, and the events leading up to it.

Volver is a vibrant and colorful film, one which can mix incredibly dark themes into a story which attains a tone perhaps best described as enchanting. Many of the women in the film experience deep traumas, but by the end of the film there's a sense of solidarity amongst them and Almodovar turns that shared strength between his characters into one of the film's greatest strengths. The women in the film consistently repudiate their would-be status as "victims" by taking charge of their narratives and inventing favorable outcomes, and none more so than Raimunda, who rewrites her own history through Paula's present, finding a better ending in which the abuser is vanquished, the rift with her mother is healed, and her financial future seems secure. While what happens in Volver is not, in virtually any respect, "realistic" that doesn't render the characters, all played so wonderfully by their respective actresses, less compelling, nor is that lack of realism a problem when the artifice is as carefully and precisely crafted as it is here. Volver is a stylized story, but not one which feels false, and in its almost operatic over-the-topness, it finds its truth and its depth. Almodovar is a director with no shortage of great films to his credit, and Volver ranks within the top tier of those masterpieces.
Posted by Norma Desmond at 8:00 AM