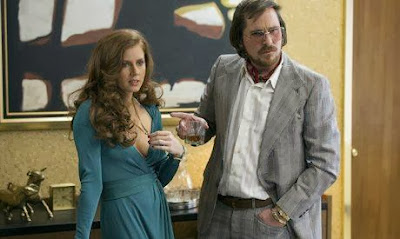 I like David O. Russell. I don't think he's made a bad film (even the much maligned I Heart Huckabees has a place in my heart), but I think he's only made one truly great film (Three Kings). The rest fall on a spectrum from "good" to "really good" with American Hustle falling smack dab into the middle of "good" - mostly entertaining and fun, but ultimately all surface. To be honest, in a year with so many great films to its credit, I'm sort of baffled that this one could be anyone's pick for the year's "best." It's a fine film with many fine actors turning in fine performances, but in the end it's a trifle with only small pockets of greatness nestled within it.

American Hustle begins in medias res with con artist duo Irving Rosenfeld (Christian Bale) and Sydney Prosser (Amy Adams), going by the name Edith Greensly, attempting to aid the FBI in catching Camden, New Jersey mayor Carmine Polito (Jeremy Renner) taking a bribe. The plan goes awry when FBI agent Richie DeMaso (Bradley Cooper) gets overzealous, pushing a briefcase full of money towards Carmine in a way that raises the latter's radar. As Carmine storms out, and an argument ensues about how to get him back and save the situation, the film doubles back to properly introduce the players and set the scene. Irving is a lifelong hustler, a guy who, as a kid, went around breaking windows in order to drum up customers for his father's glass business. Irving now owns the family business, as well as a few drycleaners and a side business in art dealing, but his real money is made conning "investors" who believe that he will find a way to secure them loans. He's later joined in this enterprise by Sydney, whom he meets at a pool party and enters into a relationship with despite the complications presented by his wife, Roslyn (Jennifer Lawrence), whom he feels he can't divorce due to the fear that she'll keep him from their son.

Irving and Sydney's game comes to an end when they're entrapped by Richie, posing as an investor, who presents them with a deal: they'll help the FBI catch four other con artists and they'll both stay out of jail. They agree and Irving comes up with a plan to pose as the go-betweens for a Sheik looking to invest in the US, a plan which quickly snakes its way towards several politicians, including Polito, a few Congressmen and a Senator. As the plot becomes larger, Irving becomes nervous. The reason he and Sydney were successful for as long as they were is because they stayed small, and now things are blowing up at an alarming rate, going bigger and bigger in order to match Richie's increasing ambition. Irving begins to sour on the deal for multiple reasons, including the eventual inclusion of the mob and his fear of reprisal, his jealousy over the growing relationship between Sydney and Richie, and the genuine friendship that develops between him and Carmine. As much as he wanted to save Sydney at the beginning, he now wants to find a way to shield Carmine, as much as possible, at the end. Now he'll need a con to get him out of the con that was saving him from a con that meant jail time.

Though based on true events, Russell and co-writer Eric Warren Singer aren't interested in delivering a history lesson, and despite Irving arguing with Richie that the worst possible thing for American morale is the discovery of further corruption within the halls of power, this isn't a self-important film about the corrosion of American political ideals in the post-Watergate era. This is presented as a lark, a game in which two particularly sly and clever individuals find themselves with their backs against the wall and forced to scheme their way free. Their con (known as ABSCAM) is secondary, with the interactions between the characters of primary interest to the film. The characters are all colorful in their own ways - Irving with his elaborate attempts to mask his baldness, Sydney with her alternate persona as Edith, Roslyn with her habit of leaving a trail of literal destruction in her wake, Carmine with his "man of the people" joviality, Richie with his bull in china shop aggression - and some of the combinations are electrifying. American Hustle is an actors' showcase, with memorable moments for everyone involved in their turn.

That American Hustle is fun is undeniable (at least, to a point). The cast seems to be having a blast with their oversize characters (Lawrence has received the most critical acclaim but to me the standout is Cooper as the increasingly ridiculous would-be Alpha Richie), and there's a looseness and sense of joy to Russell's direction. There are moments in this movie that are absolutely fantastic, including a sequence set to "Goodbye Yellow Brick Road" which comes to an abrupt halt when Rosalyn flattens Sydney with a look and spits, "I know who you are," and a sequence which cuts back and forth between Irving and Roslyn fighting about her speaking to someone out of turn and Irving being roughed up by mobsters, but on the whole the movie has some trouble focusing and telling its story. It bops between this and that, but never pauses long enough to cohere in a way to make things meaningful. Parts of American Hustle left me absolutely spellbound but other parts left me feeling a bit bored and restless. It may be that I'll come back to this film later on and find more to recommend it, but at first glance it strikes me as a minor work at best.
Posted by Norma Desmond at 8:00 AM