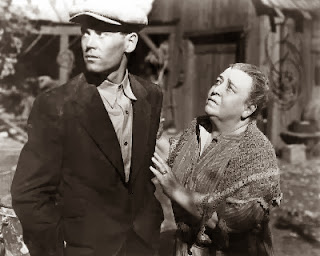 That it's taken me this long to finally see The Grapes of Wrath is kind of inexplicable. The novel is one of my absolute favorites, and John Ford is one of my favorite old-school directors, so it's a major oversight on my part that I let it go this long, particularly in light of the fact that it's a film that more than lives up to its reputation. A major work from one of the greatest American directors of all time, The Grapes of Wrath is a moving piece of work, even if it isn't as politically rich or as bold as the novel on which it is based. Still, it's difficult to believe that the novel could ever be adapted better, though Steven Spielberg is reportedly set to try.

The Grapes of Wrath begins with the return of Tom Joad (Henry Ford), recently released from prison, to the family farm in Oklahoma. As he's making his way home he meets up with Jim Casy (John Carradine), a former preacher who has lost his faith and now just wanders, and who is with Tom when he discovers the now deserted Joad home. They soon learn that the Joads, like everyone else, have been forced off their farm and taken temporary refuge with Tom's Uncle John (Frank Darien) before they head out to California. Arriving at Uncle John's just in time, Tom is reunited with his family, which includes his parents, Pa (Russell Simpson) and Ma (Jane Darwell), his grandparents Grandpa (Charley Grapewin) and Grandma (Zeffie Tilbury), his siblings Rose-of-Sharon (Dorris Bowdon), Al (O.Z. Whitehead), Noah (Frank Sully), Winfield (Darryl Hickman), and Ruthie (Shirley Mills), and Rose-of-Sharon's new husband, Connie (Eddie Quillan). Together the family - as well as Casy - piles into a truck with as many of their possessions as possible and sets out for the promised land, where work is said to be plentiful and people can make a living.

Almost immediately the cherished family unit comes under attack. Grandpa and Grandma Joad die en route to California, Connie abandons the family when he realizes how hard things are going to be, and the migrant camps the Joads take temporary residence in are hellish, full of half-starved children, and broken, disillusioned adults. Those who have money and power use and exploit the work force because they know they can, seeing that people desperate for work will work for less than they can live on, and having the authorities firmly in their pocket, able to accuse any dissenters of being "red." Eventually Tom and Casy get themselves into trouble, with Casy getting killed and Tom having to go on the run or risk going back to jail. Still, despite it all, the film finds a note of hope to end on, closing on what remains of the family heading towards the promise of finding work, and Ma Joad uttering her now immortal words: "We're the people that live. They can't wipe us out, they can't lick us. We'll go on forever, Pa, 'cause we're the people."

Adapted by Nunnally Johnson, The Grapes of Wrath makes a few fairly significant changes from the book. A couple of characters are excised from the story completely, and Noah just disappears without any explanation after appearing briefly at the beginning, which begs the question of why the character was included in the adaptation at all. The starkness of John Steinbeck's story becomes more optimistic in the transition to screen by having the government camp, where the Joads find some degree of happiness and are allowed to live with dignity, be the last one depicted in the film, by ending before Rose-of-Sharon's baby is stillborn, and by letting Ma Joad have those final words which imply that an end to suffering is on the horizon. These changes result in the film being a very different animal from the book, but they also work in terms of what the film is trying to accomplish, which is a portrait of people fallen on hard times and whose strength and determination holds the promise of better things to come. Although the film's hopeful ending does not quite have the resonance of the novel's grittier finale, it's almost impossible to imagine a film today, let alone in 1940, getting away with the final image of the book, which finds Rose-of-Sharon breast feeding a starving man. The movie could never have gone there, but where it ends up is still powerful enough on its own terms.

The Grapes of Wrath received 7 Oscar nominations, including Best Picture, Best Director, Best Actor for Fonda, and Best Supporting Actress for Darwell. Though Fonda walked away empty handed, both Ford and Darwell were rewarded, the former for his firm and humane direction, the latter for a defining performance that might, arguably, have been a contender for lead rather than supporting. While the rest of the Joad clan is rendered in somewhat vague terms - they're recognizable as a "group" more than they are as individuals - both Tom and Ma are solid and well-defined characters and the ones whose strength carries the narrative forward and brings it to a human level instead of one which is academic or sermonizing. They get the film's two big speeches - Ma with her "we're the people," Tom with his "I'll be there" speech - and in the end, they are the film's heart (Ma) and soul (Tom). How any filmmaker could take on a remake and expect to find two performances equal to those of Fonda and Darwell is beyond me.
Posted by Norma Desmond at 8:00 AM