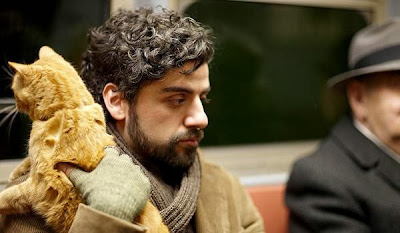 Midway through Inside Llewyn Davis someone threatens to put a curse on the eponymous folk musician. By the time the film winds its way to its final scene (I won't call it the "ending" due to the film's circular structure), you have to wonder if maybe Llewyn was experiencing a bit of deja vu because it sure seems like he's already been cursed, even if only by his own caustic personality. In their melancholy new film, the Coen brothers follow their protagonist from one desperate situation to another, the victim of both circumstances beyond his control and circumstances of his own making. He's not a "hero," exactly, but it's difficult not to feel some sympathy for him as the reverberations of his actions come back to smack him in the face over and over again, with no hint that it's going to let up anytime soon.

Llewyn Davis (Oscar Isaac) is a transient folk singer hurting from the recent suicide of his singing partner and working through the shrinking list of people who will still give him the time of day so that he can crash on one couch after another. As the film opens he's crashed in the comfort of the home of his upscale friends, the Gorfeins, accidentally letting their cat loose as he leaves in the morning. Unable to get back into their apartment, and unsure what else to do, he brings the cat along on his travels, which takes him to the doorstep of his less well-to-do friends, Jean (Carey Mulligan) and Jim (Justin Timberlake), a folk singing couple with whom Llewyn has a complicated history. Jim is his friend, Jean is something else entirely, and her revelation to him that she's pregnant and unsure whether he or Jim is the father sends him into a panic. That he's not a great friend is established by the fact that he's slept with his friend's wife, that he's a terrible friend is confirmed when he turns around and attempts to borrow money from Jim so that he can procure a secret abortion for Jean, and that Jim is a decent guy who deserves a better friend (and wife) is revealed when he arranges for Llewyn to do some session work with him so that he can make some much needed money. But even when a gift has been dropped at his feet, in this case in the form of a novelty song called "Please Mr. Kennedy," Llewyn finds a way to screw it up for himself by foregoing royalties in exchange for immediate cash in hand. Llewyn's main problem is that he only seems capable of thinking about the moment which he's currently living and not about any of the moments yet to come.

After crashing for a few days with cowboy crooner Al Cody (Adam Driver), Llewyn signs on to drive to Chicago with jazz musician Roland Turner (John Goodman) and his right hand man Johnny Five (Garret Hedlund), and while he's there (getting there only after encountering a series of disasters en route) he gets an audience with Bud Grossman (F. Murray Abraham). Months earlier Grossman had supposedly been sent a copy of Llewyn's solo album by Llewyn's agent, but claims never to have received it. He does, however, agree to let Llewyn do a live audition for him which goes about the same way as everything else in Llewyn's life. Utterly dejected, Llewyn returns to New York determined to give up on the music business and return to the merchant marines, only to learn that he's screwed up that path for himself, too. As the film's structure suggests, Llewyn is stuck in a loop from which he can't escape, bound to keep making the same mistakes over and over again, destroying and rebuilding his relationships, and getting left behind despite his considerable talent.

Filmed in a stark, wintry pallet Inside Llewyn Davis has a built in sense of despair that nicely matches the state of mind of its protagonist. The film gives the impression of Llewyn's life having been bleak for some time, and continuing to be bleak for some time after, our brief glimpse into his life. His is a life full of missed opportunities and an anxiety that opportunities will cease to present themselves. He spends his professional life forever on the cusp (not of major success, perhaps, but the kind of success that would allow him to make a living), watching as those he considers lesser talents get their breaks. His personal life is a disaster, his current situation with Jean an echo of a situation with a past girlfriend which presents him with a new opportunity to either take or not take (it's to the film's credit that his choice can be read as either a bad one/another example of his inherent selfishness or as a good one/an example of him protecting someone from the chaos which follows him wherever he goes), and he's driven by a worry that he'll end up like his father: an old man living out what remains of his days in a home, having done nothing with his life but work it away.

As played by Isaac, Llewyn is not always (or even often) a likeable character, but he's certainly a compelling one. He's capable of incredible cruelty, but the performance always roots those outbursts in the deep disappointments and anxieties that Llewyn has endured, making them, if not necessarily forgivable, then at least understandable. Llewyn is a tragic figure in some ways, but the Coens also make it clear that he's often the architect of his own misfortunes, a man who just can't help but snatch defeat from the jaws of victory. The Coens have created a lot of fascinating characters over the course of their career, and Llewyn ranks right up there at the top. Inside Llewyn Davis isn't without its weak points - the relationship between Llewyn and Jean could be better defined considering the amount of vitriol she sends his way - but it's ultimately a fantastic film.
Posted by Norma Desmond at 8:00 AM