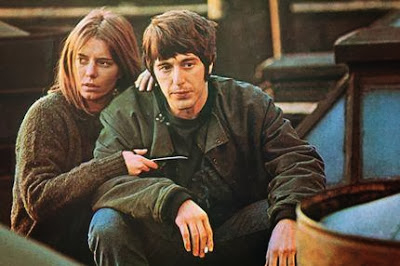 This time Netflix's recommendations included Primal Fear, Bill Cunningham New York, Chasing Mavericks, Jack Reacher, The Score, This Means War, Fracture, Friends with Kids and, most intriguingly of all, The Panic in Needle Park, the film which contains Al Pacino's first starring role. Having been curious about this film for a while, I made it my selection and it turned out to be a pretty good one - though I had some doubts that it would be during the film's first 15 overly self-conscious minutes. However, once the film settled down and actually starting living in its setting, it became a wholly engrossing drama about two people caught in the cycle of addiction.

The Panic in Needle Park is about Helen (Kitty Winn) and Bobby (Al Pacino), a young couple in love whose relationship is tested by poverty and Bobby's addiction to heroin. Living in New York's Needle Park, they're surrounded by addicts, and everyone they know is either using or selling or both. Despite the fact that nothing about Bobby's life, or the lives of his friends, seems at all glamorous, Kitty is intrigued enough to try heroin and soon becomes addicted herself. After Bobby is busted and does a stint in jail, Kitty turns to prostitution to support her habit, a fact which leads to a blow out between her and Bobby when he's released from jail and he finds out. To make matters worse, one of her clients has been Hank (Richard Bright), Bobby's brother. Bobby's rage at the thought of Kitty being with other men quickly subsides, however, and her working as a prostitute soon becomes just another facet of their life together, just like Bobby's new role as a drug supplier - a move which is supposed to put them on easy street, bringing in money and giving them easy access to drugs, but instead plunges them even deeper into the lifestyle.

All along Hotch (Alan Vint), a narcotics cop, has been keeping a close eye on Bobby and Helen and becomes increasingly convinced that he can get Helen to turn informant for him. After Helen gets arrested for stealing from a john, Hotch arranges a deal for her which requires her to turn evidence against Bobby. She agrees to the deal, but then begins to waver as she and Bobby edge into a somewhat happier interlude and she begins to imagine that they might extract themselves from Needle Park and their drug dependency. That period of happiness, however, lasts little more than an afternoon before she and Bobby begin to spiral again and, afraid of going to jail and convinced by Hotch that Bobby, who has been around the block often enough to know how to work the system, would fare better, she agrees to help Hotch bust Bobby. Her betrayal of Bobby may or may not prove to be the final nail in the coffin of their relationship, but one thing is certain: she's still stuck in Needle Park.

Written by Joan Didion and John Gregory Dunne, The Panic in Needle Park suffers, at least at the very beginning, from a self-congratulatory and highly affected grittiness but quickly settles into its milieu and begins viewing its story from the inside out, rather than the outside in. For the vast majority of its running time, The Panic in Needle Park is a deeply engrossing film and the tragic relationship at its center has the ring of authenticity. Although Helen's entry into drug use feels a touch contrived in light of the circumstances (Bobby is passed out, looking half dead in the moment she decides that heroin is something worth trying), her downward spiral plays out in a way which seems wholly realistic, as does her slowly corroding relationship with Bobby. In the beginning it's all affirmations of love and an "us against the world" attitude, with Helen's intense co-dependency making it easy for her to believe Bobby when he says he's only "chipping" and not using. By the time she comes to recognize that he's fully addicted, she's in too deep with him to break away, and once she becomes addicted herself, it's impossible. Love soon gives way to suspicion and selfishness - Helen steals Bobby's drugs, Bobby gets annoyed whenever Helen does... pretty much anything - and by the end the relationship is an ugly combination of loathing, dependency, and an aching need for the next fix.

The Panic in Needle Park relies very heavily on its central performances, and Pacino and Winn don't let the film down. Pacino would of course sky rocket to fame with his next film, The Godfather, becoming one of his generation's defining actors and then descending into a kind of broad self-parody in more recent decades, all of which make his performance here more fascinating. This is a hungry performance and, yet, not at all showy, full of delicate understatement and raw earthiness that makes Bobby a prime example of character rather than "performance." Winn, who would go on to work only fleetingly in film and television and devote herself to the stage, won the Best Actress prize at the 1971 Cannes Film Festival and delivers a performance of intense vulnerability that matches Pacino note for note. The Panic in Needle Park is very much a duet between the two characters and the performances work together in perfect harmony, helping to create a film which could give even the most visceral of recent addiction dramas a run for its money.
Posted by Norma Desmond at 8:00 AM