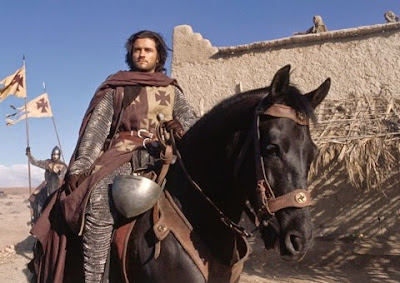 When I watch movies like Kingdom of Heaven, I inevitably end up wishing that they had been made sometime between 1955 and 1965, when historical epics had a pageantry equal to their scope. I say that not because Kingdom of Heaven is a bad movie, but because the CGI has rendered it charmless and dated before its time. While films like Ben-Hur and Spartacus and Cleopatra may feel old fashioned when viewed today, they also feel like films that were made, rather than merely assembled. While it might be easier to fill out the ranks of a massive army by creating a bunch of figures with a computer, it always ends up looking like exactly what it is, and it's never as impressive as having thousands of extras who are actually there, even if they're only there for the sake of numbers. As it stands, Kingdom of Heaven is a big movie made that ends up feeling sort of insignificant and small because the meat on its bones seems so thin. That's the way with movies now, but it's still a shame that there's so little grandeur and spectacle in productions anymore, particularly in the ones that demand it, as this one does.

Kingdom of Heaven opens in 1184, where Balian (Orlando Bloom), a blacksmith, is visited by Baron Godfrey of Ibelin (Liam Neeson), a Crusader who reveals that he is Balian's father and invites him to join him on his return to Jerusalem. Balian declines, at first, but quickly changes his mind in the hope that he can gain forgiveness for his late wife (for committing suicide) and for himself (for killing the priest who beheaded his wife before her burial) in the Holy Land. Before they can even arrive there, however, Godfrey is on the verge of death and has just enough time to knight Balian and order him to serve Baldwin (Edward Norton), King of Jerusalem, before dying, and then everyone else in the traveling party is lost during a storm at sea. Balian survives to continue the trek to Jerusalem and along the way makes a fateful encounter with Imad ad-Din (Alexander Siddig), chancellor to Saladin (Ghassan Massoud), who aims to retake Jerusalem for his people. When he finally arrives in Jerusalem, he has another fateful encounter, this time with Sibylla (Eva Green), the sister of the King and wife of Guy de Lusignan (Marton Csokas), who supports the anti-Muslim cause and intends to carry it out with utmost brutality as soon as the King, who suffers from leprosy, dies. Amidst the political maneuverings for power and the religious extremists brought out by the fight for control of the Holy Land, only Balian seems to care about the actual fate of the ordinary people and gains his redemption by serving and protecting them where others would sooner abandon and sacrifice them.

The period in which the film is set is rich and complicated and though the film, by virtue of time constraints, can't fully capture that, it does a decent job at dramatizing the historical situation and figures and streamlining it all into a relatively straight forward story. While many historians spoke out against the film when it was released for the ways that it plays fast and loose with the facts, it's always important to remember that a film isn't a text book and that the film's purpose is to entertain and find a way to engage its audience. In that respect, Kingdom of Heaven is fairly successful at a purely narrative level, using a classic rags to riches template to provide the audience's point of entry into the story, following Balian as he rises from a poor blacksmith to a man not only welcomed at a King's table, but later asked to marry his sister and take control of his army; and laying out the various factions at work in the story in an efficient way. For a film made in 2004, a time when contemporary tensions between the Western world and the Islamic one were especially high, it is also surprising in its depiction of Muslim characters (in light of last year's casting debacle over Scott's Exodus: Gods and Kings, it's also surprising that the main Muslim characters are actually played by people of color rather than white actors made up to look slightly less white). Kingdom of Heaven isn't anti-Islamic propaganda, which it easily could have been, and is actually a lot more evenhanded in its depiction of the Muslim characters than it is in some of the characters who purport to be Christian. Ultimately, the story is less about religion than it is about people who use religion as a means of gaining power and the countless people who end up caught in the middle and used as cannon fodder in a war they do not want and will not benefit from, and because it adopts that perspective it sidesteps some things that would otherwise have made it pretty problematic.

Being an epic tale, Kingdom of Heaven has no shortage of action sequences which are well done when they aren't relying too heavily on CGI. The siege of Jerusalem, in particular, plays very well with Balian and what forces he has left (and can assemble from members of the populace inside the city who are capable of picking up weapons) trying to hold the city for as long as it takes to force Saladin to offer terms of surrender which will allow Balian to get the people out of the city unscathed, and Saladin trying to take the city by breaking through the defenses with his siege weapons and watching as the resourcefulness of Balian and the people in Jerusalem take out large portions of his forces. Scott is able to give the sequence a sense of playing out on a grand scale and the effects work in this section holds up pretty well. The unfortunate thing about Kingdom of Heaven is that, even just ten years later, a fair bit of the effects work doesn't really hold up, partly because the realism of the actual sets in the foreground just highlight the artificiality of the backgrounds. I'm not sure how that looked when the film was in theaters in 2005, but seeing it on a small screen in 2015 made the film look really dated and less like a timeless epic than a film very much stuck in the time in which it was made.

Also making Kingdom of Heaven seem stuck in 2005 is the fact of Bloom playing the lead role. At the time Bloom seemed poised to become the next big thing, being part of two major franchises (The Lord of the Rings and The Pirates of the Caribbean) and a moderately successful swords and sandals epic (Troy), but his success as a secondary player has never translated to an ability to carry a film on his own and Kingdom of Heaven demonstrates that while Bloom is a very capable actor, he doesn't really have the charisma to carry a story by himself, particularly one of this size. A big film requires an actor capable of "bigness," someone who seems like, by the sheer force of their personality, they can inspire thousands to follow them. Bloom is too much of an interior and subtle actor for that and as a result his performance ends up being overwhelmed, at times, by the production around it. He never quite holds the center of the story and as a viewer you end up drifting towards the other, more interesting characters from major ones such as Norton's leper King who hides his face behind a mask, Csokas' devious Guy de Lusignan, Sidding's Imad ad-Din, who acts as a foil of sorts for Balian, and Green's Sibylla, whose intelligence can't save her from being used as a pawn, to secondary characters such as Raynald of Chatillon, played by the always excellent Brendan Gleeson, to say nothing of the work of Neeson and Massoud, as well as Jeremy Irons and David Thewlis. In a film where so many actors stand out for their character work, Bloom disappears in the crowd when he should be standing out as the star.

All that being said, Kingdom of Heaven is actually a pretty solid film despite a few flaws. Had it come out a year earlier, before the semi-success of Troy and the disaster of Alexander, or perhaps two years later, when it could have fed off the heat of 300, it might have done better at the domestic box office, though the contemporary political climate would probably always have been an issue given the film's subject. If it had had a more forceful actor at the center, one whose vigor could have counterbalanced the film's somber tone, that might have made a difference, too. Still, success is something that can be measured in many different ways and if Kingdom of Heaven was not a financial success, it can at least claim to be, on the whole, a creative success. It's an engaging film about a fascinating period of history, a period that Kingdom of Heaven can't fully realize in all its complexity due to the constraints of cinema, but one which, considered in the context of what Hollywood tends to do with history, is better than average as a dramatization of real historical events.


Should It Have Been a Blockbuster?: Technically, it actually was a blockbuster internationally and only failed to find an audience domestically, and to be honest I'm kind of scratching my head that Kingdom of Heaven couldn't at least make it close to $100 million domestically, given the films that were released in the weeks around it because it's not like there were any huge hits taking up all the audience until Revenge of the Sith came out a few weeks later. So, I dunno. It has many of the elements of a success, and it's certainly better than a number of movies that have done better at the domestic box office, but obviously the audience just wasn't there for it.
Posted by Norma Desmond at 11:30 AM