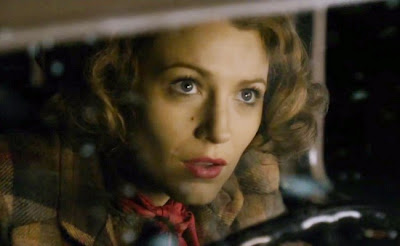 The Age of Adaline is a film with a fantastical premise that succeeds precisely because it doesn't treat that premise as fantastical at all. At its core, Adaline is a very sincere love story that plays everything with a straight face, and somehow that works even though that love story plays out between a 107 year old woman and a 30-something year old man who is the son of a man the woman once loved and left behind. That probably makes this sound like lurid soap opera, but it really isn't. It's a solid, classical type of film that we don't see too often anymore in our age of irony and meta jokes, but that we could ultimately use more of. It helps that the film is anchored by a wonderful central performance, which is not something I ever expected to say about Blake Lively.

Adaline Bowman (Lively) is introduced to us via an omniscient and unseen narrator who elegantly and efficiently sets up the premise and stakes of the film. Born on New Years Day in 1908, Adaline had a perfectly normal existence for the first 29 years of her life, growing up in San Francisco, getting married and having a daughter before being widowed when her husband is killed in an accident during the construction of the Golden Gate Bridge. In her 29th year Adaline has a car accident which results in her being submerged into a freezing body of water and her heart stopping, only to be restarted when a bolt of lightning strikes her. For years it seems as though her recovery is miraculous but not necessarily defining until she reaches a chronological age where her appearance begins to be markedly different from that of her peers, making her look closer in age to her daughter than to those she herself has grown up with. Around this time she hits the radar of the local authorities and then the FBI, who are suspicious of her claims to be her natural age when she looks so much younger and who take her into custody with the intention, ominously expressed, of running some tests on her. She escapes before they can take her away and spends the next several decades on the run, adopting and then discarding new identities and moving from place to place while keeping in contact with no one save her daughter, Flemming (played by Ellen Burstyn in the present day scenes).

While moving on is the key to her continuing existence, Adaline ultimately always seems to end up back in San Francisco. As the story opens she is going by the name Jenny, an identity she only intends to keep for a few more weeks before moving on to a farm in Oregon and a new identity to go along with it. Before she can do that, however, she meets Ellis Jones (Michiel Huisman), a philanthropist who pursues her and with whom she falls in love despite her reluctance to get involved with anyone. Her instinct is to run, leaving Ellis behind as she has so many others before, but Flemming convinces her to give it a chance, reasoning that anyone who was once looking for her has long since died. However, just as Adaline is becoming comfortable in her relationship with Ellis, she meets his parents Kathy (Kathy Baker) and William (Harrison Ford), and William instantly recognizes her as the woman he fell in love with while studying in England in the 1960s. Adaline tells him that the woman he knew was her mother, but William, despite being a scientist who believes in facts and the explainable, can't shake the feeling that there is something otherwordly going on. Faced with the prospect of her secret being exposed, Adaline finds herself forced to choose between running and embracing the unexplainable truth of her existence.

Written by J. Mills Goodloe and Salvador Paskowitz and directed by Lee Toland Krieger (director of the very different in both tone and style Celeste and Jesse Forever), The Age of Adaline is a film that feels like a throwback in many ways. There's an old school glossiness and polish to it and a deep earnestness to its tone so that it (like its characters) doesn't just suggest a nostalgia for the past, but fully embodies that older sensibility. Superficially it's a really beautiful looking film, but what ultimately makes it work is how thoroughly it leans into its premise and plays by the rules it establishes for itself. While the how and why of Adaline's continued existence are a mystery to her and those who know about her, the narrator explains it to us and then the film plays out its story within the confines of that explanation, never treating Adaline's existence with a wink but just asking you to accept it at face value. It's easy to do that for the (to me, at least) surprising reason that Lively is truly great in the central role. I've never been particularly impressed by her as an actress, but she does an excellent job at playing Adaline as a woman far older in experience than she appears to be. Lively imbues Adaline with a sense of worldliness and of the kind of calm that comes from having seen it all (and, in her case, experiencing something that no one else ever has), and plays her with the bearing and attitude of a woman from an earlier time, which matches nicely with her classic, old Hollywood kind of beauty.

The Age of Adaline is, generally speaking, a well-made romantic fantasy. It falters slightly in its storytelling when it incorporates the FBI into the narrative, but this section is very brief and ultimately only used to provide the story with a sense of high stakes beyond the fact of Adaline outliving many of the people she's loved in her life. It also sells Flemming a bit short as a character, as the story gives the impression that she's spent her entire life in her own kind of suspended animation where she's been so wrapped up in her mother's own (admittedly) extraordinary existence that she doesn't appear to have lived her own life. At the same time, however, Burstyn is good in her limited amount of screen time and full credit goes to her and Lively for the way that, despite their actual ages as actors, they're able to give the interactions between the characters the feeling of being between a mother and daughter, with Lively seeming like the more mature and centered one and Burstyn the sort of impulsive and dreamy one, as if having an immortal mother has made her a perpetual teenager. I didn't have especially high expectations for The Age of Adaline, but I found it really engaging and entertaining. It's not a masterwork by any means, but it's a great, middle of the road entertainment.
Posted by Norma Desmond at 8:00 AM