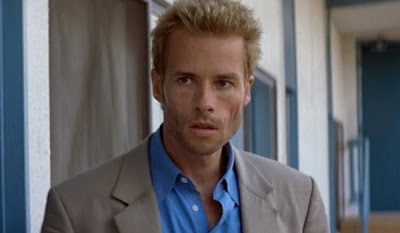 Before he helped usher in a new era in the comic book hero genre with his Batman trilogy, before he proved that it is possible to create blockbusters out of original ideas with Inception and Interstellar, Christopher Nolan made a tricky little thriller called Memento. A formal marvel which manages to tell its main story backwards (and its secondary story forwards), winding its way back to the beginning without losing any narrative momentum and without resting on the laurels of its hook, Memento is also a terrific little character piece. Using a classic revenge tale as its genesis, Memento makes the most of its premise and its structure in order to tell a story based as much in the psychology of its main character as in the mechanics of its plotting. While Nolan would go on to make films that do a lot with a lot of resources, Memento demonstrates that he's equally capable of doing a lot with a little and creating something of lasting impact.

Guy Pearce, in one of the best and most offbeat roles of his career to date, stars as Leonard, a man with a very particular ailment and a very particular mission. The ailment is anterograde amnesia, a condition which makes him unable to form new memories, and the mission is to find and kill the man who raped and killed his wife and attacked him, causing him to develop the condition in the first place. Because of his condition, Leonard has developed a series of mechanisms to assist him not just in carrying on his investigation from one moment to the next, but to go about his life from one moment to the next when he's in a position where he's essentially starting from zero every morning, having to figure out where he is when he wakes up and go through the steps of learning what he's doing and how he's gotten to where he is. His body is covered in tattoos of notes about the case - that the man he's looking for is named John or James G., his license plate number, the crime he committed; and that Leonard should remember the story of "Sammy Jankins" - and he carries a camera with him everywhere so that he can take polaroids of people and places as he collects new information. Along the way he has also collected allies - or, at least, people who present themselves to him as allies, including Teddy (Joe Pantoliano) and Natalie (Carrie-Anne Moss). As the narrative works its way backwards, it reveals not only how Leonard arrived at where he is when we first meet him, but how Leonardo's quest is self-perpetuating and slowly leading to the destruction of what remains of himself.

If you watch Memento on DVD you have the option of watching the film in chronological order but, though the film is more than a gimmick and won't fall apart if you take that away, watching it that way sort of misses the point. Memento isn't just a story, it's a mood, and by telling the narrative backwards Nolan puts the viewer in the frame of mind that Leonard exists in from a moment to moment basis. One scene ends and another begins and, as a viewer, you have to reorient yourself and figure out where you are in the story and what's going on, which in turn aligns your sympathy even more firmly with Leonard. As Nolan (who adapted the screenplay from a story written by his brother, Jonathan Nolan) peels back the layers and shows just how vulnerable Leonard is to being manipulated and taken advantage of by others, we become even more sympathetic to him until, at the end (the beginning), Nolan turns the tables and shows that even Leonard himself is a manipulator and is controlling his story in ways that he won't be aware of moments later. Leonard's stated goal is to get justice for his wife, but in truth he clings to his role as the avenger because it's the only identity that he has left. At one point he laments of his wife, "I can't remember to forget you," but the point of the story is that Leonard cannot move on from the tragedy of the past because it is the only thing that gives meaning to his existence. On some level he knows this, which is why he consciously makes the decision in the film's final scene to exploit his own condition and set himself on a path that can only lead to further violence and destruction, rather than the peace he claims to be seeking. While watching the film in chronological order may illuminate just how well the revenge tale holds together without the central narrative device, so much of the tone and the depth gets lost in doing so that to my mind it isn't worth it. Memento is a film that you're meant to feel a bit discombobulated by while watching; the structure isn't designed merely to grab your attention and make the film stand out from other revenge thrillers, it has a real and important purpose.

The success of Memento belongs, for the most part, to Nolan, who in addition to the technical storytelling prowess he demonstrates here also demonstrates a keen eye to the needs of the audience. While his work tends to be rather somber in tone (give or take a moment of gleeful violence from the Joker), Nolan recognizes that for a film like this, which requires the audience to do some work in order to keep up with how it is unfolding, a heavy tone could make watching it too taxing. Memento is certainly a dark film, and sometimes a violent one, but it's also his funniest, finding the humor in Leonard's mental predicament ("What am I doing?" he asks himself at one point and then, spotting a guy running slightly ahead of him, "Oh, I'm chasing this guy." When the guy shoots at him, he corrects himself, "No... he's chasing me") and giving him a sort of goofy sidekick in Pantoliano's Teddy. The mixture of lightness into what could otherwise be an oppressively dark story helps make it so deeply engaging and allows the actors some room to breathe with their characters. Pearce's performance on the whole is very serious, befitting his character's history and his present, but it isn't without subtle touches of whimsy, and Pantoliano delivers a performance which renders Teddy as one of those people who truly is a character as he cracks wise and dominates scenes with the force of his personality, using those characteristics to mask the fact that he really isn't the pushover/jester that he may appear to be. Nolan is the architect and deserves much of the praise, but the main actors (including a razor sharp Moss as a wolf in sheep's clothing) bring something invaluable to the film with their wonderful performances. 15 years on Memento may no longer be the surprise that it was in 2000, but it remains a fascinating and wonderful film.
Posted by Norma Desmond at 8:00 AM

Memento is simply amazing. It is definitely worthy of being called one of this century's "essentials." Great review.

I hadn't seen it in years before watching it to write this; I was surprised by just how well it has held up.