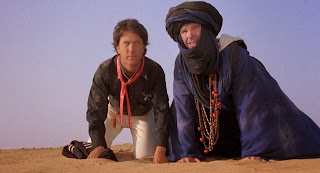 How a film is perceived has as much to do with the work itself as with the audience taking it in. That principle has rarely been made clearer to me than while watching Ishtar, the notorious 1987 film which bombed at the box office and, largely, with critics. To go by critics viewing the film in 1987, Ishtar is "piddling" and "dreadful" with its few funny scenes spaced "as far apart as oases in the Sahara." It's weird because I watched the film for the first time recently and found it to be clever and funny. It's excessive as hell - on that point, at least, the film's original viewers were spot on - but, I dunno, if a studio is willing to throw $51 million at you to make a comedy (for point of reference in terms of just how much that was in 1987, the highest grossing film of that year made $167 million total, which is $20 million less than Age of Ultron just made this weekend, and was one of only four films that year to crack $100 million), then why the hell wouldn't you go for broke? Arguably it wasn't worth it, since Elaine May hasn't directed a film since, but in this case reputation is nothing; Ishtar deserves a chance to win you over.

Ishtar is the story of Chuck (Dustin Hoffman) and Lyle (Warren Beatty), two dumb guys whose misfortune is that their talent is not equal to their stupidity, because if it was they would be two of the most successful entertainers in the world. As it is they're a couple of unsuccessful songwriters who aspire to be the next Simon and Garfunkel while writing songs with titles like "Hot Fudge Love" and with stories that are, for example, told from the point of view of an old man who intends to leave love in his Will for his wife (and is written for a specific couple and played for them on the occasion of their 50th anniversary, much to their growing discomfort as the song goes on to note how little time they have left together). Even though they get absolutely no encouragement from those around them - audiences don't jeer when they perform, but instead sit in nervous silence as if they suspect that these two enthusiastic singers are mentally challenged and don't know any better, and it would therefore be in bad taste to boo them - they are convinced that they are on the verge of securing a record deal. Songwriting, to them, is everything and they devote so much time to it that Lyle ends up losing his wife and Chuck loses his girlfriend, but they continue to soldier on and eventually get what they think will be their big break, playing at a hotel in Morocco for soldiers stationed there.

Chuck and Lyle take off overseas, having to take a roundabout route to Morocco which finds them having a stopover in Ishtar, a small neighboring nation in the midst of violent upheaval. While waiting for their connecting flight Chuck is approached by Shirra (Isabelle Adjani), a revolutionary who is in possession of a map that could help overthrow the Emir and who convinces him to give her his passport and trade suitcases with her. Chuck convinces Lyle to go on ahead to Morocco without him, promising that he'll follow the next day after he gets a new passport from the Embassy. That proves to be easier said than done as Ishtar is on the brink of all out civil war, but fortunately Chuck's exchange with Shirra did not go unnoticed and a CIA agent, Jim Harrison (Charles Grodin), recruits him for the US government's agenda, which is to protect the current regime in Ishtar. Harrison sends Chuck on to Morocco, where Lyle has now come into contact with Shirra and been unwittingly recruited to the leftist side. While Chuck and Lyle stumble their way around Morocco, just trying to get a record deal and not quite grasping that they've gotten themselves into the middle of a major political event, the forces around them converge to make war.

The problem with Ishtar, insofar as there is a problem with Ishtar, is that it's a sly, farcical comedy that's been tucked into the pocket of an epic adventure. The bigness of the production - big budget, big stars, big narrative stakes - certainly does dwarf the film's best elements and does nothing to play to May's strengths as a filmmaker. It's clear from the film's climax, which involves two helicopters, a grenade launcher and machine guns, and ought to be action packed but is entirely lacking in urgency, that scenes of this nature are not in her wheelhouse. That said, the situation does result in one of my favorite exchanges from the whole film: Lyle and Chuck, having been tricked into going out into the desert to die with a blind camel in tow, begin to realize the magnitude of the trouble that they're in and try to escape, but the camel has lain down and won't cooperate. Exasperated, Chuck cries, "Stupid-ass camel! He'd rather sit there than move when you ask him! He'd rather get shot!" To which Lyle replies, "Actually, I kind of admire that." After a beat, Chuck states, "Me, too." The camel may be blind and one stray bullet away from death, but he's nothing if not an individual and doggedly determined to do things his own way, which is a trait that he shares in common with Chuck and Lyle.

Other than the fact that Columbia Pictures gave May the budget to film it, there's no real reason why the global politics plot even needed to be part of this story. If Ishtar had only been a modestly sized film about Chuck and Lyle being the sort of performers whose delusional, but almost admirably unflappable, belief in their non-existent talent makes the audition episodes of shows like American Idol so popular, then it would have been a fine film and probably better received. The film's big budget drew attention to the project long before it even hit screens which, combined with the film's long post-production period and delayed release, fostered a preemptively hostile attitude towards it. This happens with a lot of big budget films because when something grows that excessive people on the outside become resentful of the I-am-a-genius-and-can-do-whatever-I-want type of behind the scenes attitude which a filmmaker must possess in order to demand resources at that level, and begin salivating over the prospect of that person being cut down to size. When that too big to fail perception takes hold, the film can only end up being either a Titanic type of success or a Waterworld type of failure - there is no middle ground; the film has to be huge or it will be nothing. Ishtar started filming in October of 1985, finished in April of 1986, and wasn't ready for screens until May of 1987. This means that there was a period of about a year and a half during which numerous articles were written about what an impending disaster it was going to be (it was dubbed "Road to Ruin" by industry writers in reference to the Hope/Crosby Road movies which Ishtar at times suggests), which means that it was essentially written off before it even had a chance to prove itself. People expected it to be awful, and perhaps even wanted it to be awful, and so its reception was something of self-fulfilling prophesy.

I say this because I'm genuinely hard pressed to imagine that if it weren't for preconceived attitudes that Ishtar needed to and deserved to fail, it wouldn't have received a warmer critical reception. Certainly some critics would have disliked it, as tastes vary and the film is a bit weird, but more may have been open to Ishtar's charms, of which there are many. From the running gag about how Chuck is the ladies' man and Lyle is insecure as he believes that he can never measure up to his friend in either looks or charisma, to Grodin's hilariously dry turn as the CIA agent, to the moments of farce such as when Lyle and Chuck are walking through a Moroccan market being followed none too subtly by agents from various factions (as one CIA agent observes, the KGB are dressed as Arabs, the Arabs are dressed as Texans, and the members of Turkish intelligence are dressed in Bermuda shorts; the CIA members themselves are each wearing robes and a fez), Ishtar is a film that hits the comedic mark a lot more often than not. It's also quite clever in terms of how it unfolds its political plot, getting a lot of mileage out of the notion that the US government has a habit of interfering in the functioning of foreign nations and as a result creates a quagmire where one didn't previously exist, and doing so in a way that feels playful rather than like a statement. What Ishtar does well, it does very, very well, even if its epic scope is a bit unwieldy for what the story actually is. Ishtar's reputation is perhaps cemented after over two decades spent as the butt of Hollywood jokes, and that's a shame because it really is a decent movie. It's not great and it's far from perfect, but it is way better than pop culture may have left you to believe.

Should It Have Been A Blockbuster?: Well, movies this weird are almost never blockbusters, but it definitely deserved to at least break even.
Posted by Norma Desmond at 8:00 AM