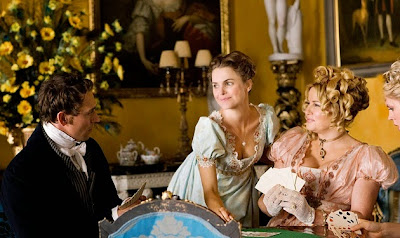 It's a shame for the second half of Austenland that it's attached to the first. By the time it actually begins to relax into its premise and decide on the tone it wants to hit, it becomes rather charming (even if there are certain issues with respect to logic) and the sort of film that can make for a nice diversion. To get there, though, you have to muddle through that first half, where the film tries to merge the subtle comedy of Jane Austen with broad, sort of slapsticky, kind of vulgar comedy, and demonstrates what appears to be a complete disinterest in so much as establishing, let alone developing, its characters. That, in the end, the film almost works regardless is a testament to how strong its strengths ultimately are.

Austenland begins with its heroine, Jane Hayes (Keri Russell), an American obsessed with Jane Austen and, in particular, with Colin Firth's portrayal of Mr. Darcy in the 1995 version of Pride and Prejudice. Her home is decked out like a shrine to all things not just Austen, but all things Austen's vision of the Regency Era, which her best friend finds alarming. More alarming still, she learns that Jane intends to spend her savings on a trip to an Austen-themed resort called Austenland, where she'll be able to live out her fantasy of living in an Austen novel. When she arrives, however, she finds that the reality does not exactly accord with her fantasy. For one thing, she discovers that, having bought the cheapest package, she's signed herself up to be treated as the "poor relation" among the other guests - including Elizabeth Charming (Jennifer Coolidge), an apparently wealthy American who has no idea who Jane Austen actually is but wanted to go to the place with "that Darcy guy," and Amelia Heartwright (Georgia King) - and for another, though the resort's owner, Mrs. Wattlesbrook (Jane Seymour), promises that every guest will experience an Austen-like romance with one of the resort's actors, there are only two men - the theatrical Colonel Andrews (James Callis) and the withdrawn Mr. Nobley (JJ Field) - for the three women in attendance, and Jane finds herself the odd woman out. In the result, she finds herself drifting towards one of the park's workers, Martin (Bret McKenzie), who thinks the whole "pretend to be a Jane Austen character" thing is ridiculous, and who she has to sneak around to see lest they be caught by Mrs. Wattlesbrook and she get kicked out of the resort.

When a new character in the form of Captain George East (Ricky Whittle) arrives and makes all the women aflutter with his tales of his adventures in the West Indies, not to mention the anachronistic frequency with which he opts to go shirtless, Martin gets jealous and blows Jane off. In the aftermath, Jane decides to seize the Austen experience that she feels is being denied her and takes charge of her character's narrative (with some help from Ms. Charming, who helps her create some more colorful garments so that she can set aside the drab dresses that are reserved for those who buy the cheapest package) to begin openly pursuing Captain East. This gets her on Mrs. Wattlesbrook's bad side, however, and nearly results in her being expelled from the resort before Ms. Heartwright comes to her rescue - a favor which comes with some strings, as Mrs. Heartwright reveals that she's a frequent guest of the resort and all for the reason of having a thing for the actor who plays Captain East. Now forced to find ways to help Ms. Heartwright get close to Captain East, Jane finds herself left with Mr. Nobley, with whom she has been enjoying an Elizabeth Bennet/Mr. Darcy type of rapport, but also finds that Martin has come back around, leaving her to question whether she wants to continue on in her fantasy romance, or ditch the pretense and go for the real thing.

Adapted from the novel of the same name by Shannon Hale, Austenland begins very, very badly (not having read the novel, I can't say whether it begins any better). It draws Jane and her life in such broad and almost cartoonish strokes (don't even get me started on the loutish ex-boyfriend whose attempt to publicly humiliate/seduce her results in her wanting to run away to Austenland) that Jane doesn't even have time to register as a character before she's whisked away to England and we don't really have any idea who she is to begin with aside from the fact that she really, really likes Jane Austen. I also, genuinely, could not tell you what year or decade this movie is supposed to be set in - if it weren't for the fact that Jane has seen the 1995 Pride and Prejudice, I would think it was set in the 1980s, given the soundtrack. If it weren't for the presence of cell phones, I would think it was set in the mid-90s. Tone is also an issue, as during the opening sections the film has absolutely no grasp on what tone it wants to go for and is so scattered in this respect that many of the would-be comedic beats fall flat, and when the film isn't funny, it merely highlights how little sense the story's premise makes. Because Jane has bought the cheapest Austenand package, the resort's owner, Mrs. Wattlesbrook, treats her with open contempt pretty much from the moment she arrives, leaving you to wonder who would pay for that, not to mention how the resort stay in business treating customers that way. It doesn't make sense and makes even less sense when you consider that the film doesn't even use it to make the point that by being cast as the poor relation, Jane actually is getting to have the Austen experience, it's just more Mansfield Park than Pride and Prejudice.

For all that, though, once Austenland sort of settles down and into its plot, it does become an enjoyable, albeit very light, entertainment. While Coolidge's character is way oversize, particularly for a story trying to comment on the more delicate sensibilities of Austen, and almost seems like a parody of the brash, loud American, you couldn't call her character an "ugly American" because Coolidge invests her with so much warmth and heart. While Coolidge isn't exactly doing anything here that she doesn't do in a lot of other roles, she does it so well that even if it feels like a retread, it's a forgivable one (it helps that even when the film is at its clunkiest, she manages to find a way to sell her laugh lines so that they're actually funny). The character is pretty ridiculous, but ends up serving as a nice counterbalance to Jane's story with Mr. Nobley, which is much more in line with Austen's storytelling and works really well once it gets going. While three seasons of The Americans have left me preferring Russell when she's steely, capable of bursts of incredible violence, and modeling a series of bad wigs, Austenland shows that she's capable of helming a light romantic comedy as well - I just hope that next time she gets to play a character who has a little more character to her.
Posted by Norma Desmond at 12:34 PM

The movie has some issues, but I love this movie. It's one of my guilty pleasures. But you're right it could have been a lot better.

Yeah, it's sort of cute and harmless. Once you get past the bad opening stretch, it's a pretty decent movie.