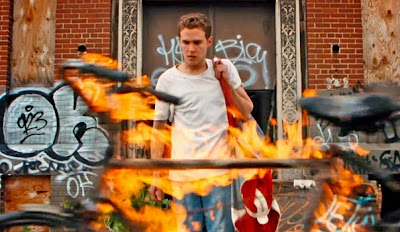 A flaming bicycle speeding past. A door shaped like a demon mouth, making it look like those who enter it are being devoured. The head of a dinosaur crashing through a windshield. A girl riding high above the ground, perched atop an easy chair set up in the back of a convertible. Ryan Gosling's directorial debut Lost River is full of dynamic images, but the film itself fails to live up to them. Emotionally and narratively inert, and confusing "weird" for "compelling," Lost River is a film that unfolds without any real sense of purpose and instead plays more like a fan tribute to Gosling's favorite filmmakers, with heavy emphasis on David Lynch and Nicolas Winding Refn. Gosling will no doubt make another movie as a director someday, but hopefully by that time his sense of identity as a filmmaker will have developed as much as his eye for strange beauty.

Lost River is a film which tells a story set in a place that resembles our world, but feels distinctly alien. It centers on Billy (Christina Hendricks), a single mother living with her two sons, teenage Bones (Iain De Caestecker) and much young Franky, in a decaying suburb where they are one of the last holdouts in their neighborhood, the others being teenage Rat (Saorise Ronan) and her grandmother, who is mute, a hoarder, and never leaves their home. Three months behind on her mortgage, Billy is in desperate straights when Dave (Ben Mendelsohn), the new manager of her bank, offers to help her out by getting her a job at a special burlesque club where the performers, led by Cat (Eva Mendes), act out gory murder scenes for the assembled crowd, who don't seem to be bothered when they get sprayed with blood. When her time comes, Billy performs an act which makes it look as if she is slowly cutting and peeling away her own face, and though she plays her part with considerably less delight than Cat or the other performers, the audience nevertheless eats it up. Billy sticks with it because it will pay the bills and keep her house from being torn down along with all the others on the street, but when it becomes clear that Dave hasn't arranged for her to have the job out of the goodness of his heart, she begins to realize that the situation is untenable.

Bones, meanwhile, has gotten himself on the wrong side of Bully (Matt Smith), a small time gangster. Trying to raise enough money to fix his car and get out of town, Bones has been cannibalizing abandoned houses for the copper wire inside, but Bully has claimed the abandoned areas of town as his own and maintains control of it with the help of his henchman, Face (Torrey Wigfield), who becomes a walking warning not to cross Bully after he lets Bones escape with his duffle bag of copper wire and Bully carves up part of his face. Bones tries to lay low and avoid Bully's vengeance, but in an area where there are no crowds to blend into, he's quickly located. Before coming after Bones directly, Bully goes after Rat, who essentially sacrifices herself to him in an effort to save Bones and ends up watching helplessly as he performs a vicious act. Having been told by Rat about a town that has been submerged in water to make way for a reservoir, Bones believes that that place is the key to solving his problem and saving himself and the people that he loves.

Lost River, which Gosling wrote in addition to directing, plays as if it is actively seeking out cult status, throwing in a lot of offbeat notes and images just because it can and as if doing so creates meaning in and of itself. Offbeat is fine, of course, but it works best when it's actually expressing something instead of simply luxuriating in the opportunity to be weird. There are some elements of the film that work really well and suggest the possibility of a better film existing beneath the surface of this one, but Gosling is never able to seize those elements and properly build on them. His depiction of a town crumbling beneath the weight of poverty and falling into anarchy not only makes excellent and evocative use of the locations in and around Detroit (if the film held together better it might challenge last year's Only Lovers Left Alive for its use of Detroit as a spiritual secondary character), but also gives the story an effective post-apocalyptic feel. Similarly, there are things about the murder burlesque club that could work, given the right care and attention, as an expression of how people who feel helpless as a result of economic depression might go to extremes to seek catharsis in order to alleviate their anxieties, but Gosling doesn't go anywhere with that. Like everything else in Lost River, these things are only half-developed, built up just enough to provide a frame for some striking and startling images, but empty of any deep meaning.

Lensed by Benoit Debie, whose credits as a cinematographer are as varied as Gaspar Noe's Irreversible and Harmony Korine's Spring Breakers, Lost River is a film that never looks less than beautiful and makes vibrant use of color. If Gosling had been able to do anything particularly original with that, then Lost River might have made it on style alone, but everything in it is just so derivative that it's difficult to praise even that. Lost River may very well end up attaining the cult status it so desperately desires, thanks in part to a couple of moments and images that I think will be prove to be very gif friendly, but by the time I reached the end I was just bored with it and its recycled imagery and its soft spoken dialogue meant to seem profound without actually saying anything. Visually striking though it may look, it's hollow on the inside. Lost River is all sound and fury, signifying nothing.
Posted by Norma Desmond at 8:00 AM