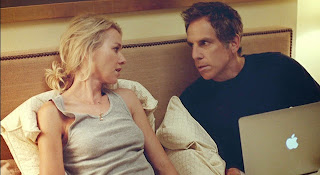 Youth is wasted on the young, but in the case of Noah Baumbach's While We're Young, it is also wasted on the middle-aged. Though it's being marketed as a somewhat raucous generational comedy, as if it's a gentler and less raunchy version of Neighbors, no one should go into While We're Young expecting a laugh-a-minute movie. It has some lines and moments that are very trailer friendly and it is a funny movie, but it's funny in that sharp, find the humor in tragedy and the tragedy in humor sort of way that is typical of Baumbach's work - this may be more conventional and broadly appealing than the filmmaker's previous films, but it's still Baumbach. Featuring a couple of great performances at its core, While We're Young is a strong effort, even if it deflates a bit in its final act.

The couple at the center of the story are Josh (Ben Stiller) and Cornelia (Naomi Watts), who are in their mid-40s and starting to feel displaced as everyone their age are becoming (or have already become) parents. Childless partially by choice and partially by circumstance, Josh and Cornelia struggle to relate and search for something that will validate their lifestyle, which they inadvertently seem to find when they meet Jamie (Adam Driver) and Darby (Amanda Seyfried), a couple in their early 20s who seek to befriend them. Jamie is an aspiring documentary director who introduces himself to Josh as a fan of the obscure film Josh made years prior, and though he's almost theatrically obsequious, it's Josh who is soon falling all over himself for Jamie. While Cornelia is slightly less enamored with their new young friends, the time that she and Josh spend with Jamie and Darby results in a superficial overhaul of their life together. They dress differently, they go out and do things that they would never do before, like attend an ayahuasca ceremony so that they can hallucinate and throw up, and they try to feed off of what seems to be the energy of youth and optimism that radiate from Jamie and Darby. In certain respects, the time they spend with Jamie and Darby revitalizes them and their marriage, but it also makes them realize just how distant they've become from their peers whose lives are as alien to them as that of Jamie and Darby, but more threatening because at least with Jamie and Darby they have the comforting sense of been-there-done-that.

Things between Josh and Cornelia and Jamie and Darby - or, more specifically, between Josh and Jamie - begin to sour after Josh and Cornelia, who is a documentary producer, agree to help Jamie with a project he's been working on. While Josh thinks he's mentoring Jamie, what he comes to realize is that Jamie sees him as a stepping stone to getting to Cornelia's father, Leslie (Charles Grodin), a legendary documentary filmmaker who is about to be honored for his contribution to the art. While Josh continues to struggle over the film he's been trying to put together for a decade, Jamie appears to fall backwards into the perfect story, and Josh becomes jealous of how easily things seem to come to his young counterpart. As his feelings for Jamie begin to change, Josh begins to see things in him that he avoided seeing before and begins to realize that much of what Jamie presents as his genuine self is merely a well-crafted facade calibrated to help him realize his grand ambitions. While most people seem prepared to excuse Jamie for those ambitions, Josh sees it as a betrayal of himself and his idea of what Jamie represented, and in his pain he decides to get his revenge, only to discover that achieving that satisfaction isn't as simple as it seems and, even if it was, it wouldn't do anything to address the real issues which are plaguing Josh.

Baumbach gets a lot of mileage out of the seemingly vast difference between people of Josh and Cornelia's generation and people of Jamie and Darby's generation. To Josh and Cornelia, Jamie and Darby represent something which makes them feel nostalgic for their own youth, while also representing something foreign to Josh and Cornelia's own experiences. There's a great line early in the film when Josh gets a look at Jamie's considerable record collection and remarks that he used to have all the same records, only his were CDs. Jamie and Darby are fully in hipster throwback mode, but they're so thrown back that they've skipped over the markers of Josh and Cornelia's generation in order to embrace the cultural markers of the generation prior to that. That sense that Jamie and Darby aren't so much the kids Josh and Cornelia used to be, but something that makes Josh and Cornelia the generational equivalent of the forgotten middle child, and that Jamie and Darby look past Josh and Cornelia and towards the generation that came before them as something aspirational, drives the third act conflict. Though he says otherwise, Josh clearly dislikes his father-in-law and it's clearly because Josh himself feels insecure about Leslie's accomplishments and his own failure to measure up. In much the same way, Josh comes to dislike Jamie because the ease with which Jamie can step up and put his own film together calls into question the herculean effort Josh has been putting into his own. That the big "reveal" Josh makes at the end inspires the opposite reaction from Leslie than Josh was expecting only underscores that the problem isn't so much that young people suck, but that Josh is frustrated by the lack of validation he's received either in the form of a symbolic pat on the head from Leslie or in the form of flattery by way of Jamie emulating him and seeing him as something worth trying to become, and that Josh and other Gen X-ers feel that they've been forgotten or squeezed out coming between the world controlling Baby Boomers and the future owning Millennials.

I confess that I'm somewhat divided on my feelings about this film and will probably need to watch it again before I've really made up my mind about. Specifically, I can't decide whether what Baumbach is doing is so subtle that it can be read as ambiguous, or whether Baumbach is so inwardly turned with this project that he's making certain points without meaning to. The film seems to see Josh as something of a tragic hero, beleaguered on all sides and unfairly denied his moment of triumph, yet what we see in the story isn't quite that straightforward. Josh becomes incensed when he realizes that Jamie has fabricated the narrative device which provides the point of entry into his documentary and comes down on him hard, calling him a fraud and melodramatically declaring that people go to jail for what he did. He demands nothing less than for Jamie to be publicly shamed for what Josh sees as a betrayal of the ethics of documentary filmmaking, and yet earlier in the film, when Josh was still in an affectionate frame of mind towards Jamie and helping him with his documentary, Josh agreed to recreate a moment which had not been caught on camera. So why is one kind of fabrication cause for an inquisition, while another is considered such standard practice that it doesn't even warrant mention after the fact? Josh's hypocrisy is never addressed, and the fact that the film makes Jamie a calculating villain in its final act, thereby validating Josh's insecurities and frustrations, leads me to believe that Baumbach sort of loses the forest for the trees in his effort to depict the chasm between generations.

Compounding my issues with the film's finale is the ambiguous ending for Josh and Cornelia. The film makes a point of defining them as a childless couple, and though they did try for a time to have children, they ultimately seem ambivalent about the fact that it never happened. The film's ending, then, feels like something of a cheat if taken at face value, though an argument could be made that the ending is merely a sign of how lost Josh and Cornelia still are. They spend the bulk of the film trying to make themselves "younger," reimagining their lives so that they can fit in with Jamie and Darby and trying to conform to them. In the end they return to their old friends and their own generation, but to do so means conforming to that way of life, which means seeking out and embracing parenthood. Read this way, that final shot of Josh and Cornelia could signify that they realize that they've fallen into the exact same trap all over again, but nevertheless I found the film's finale dissatisfying for how often Baumbach seems to take the easy way when it comes to wrapping up the film's storylines.

All that aside, While We're Young is still a good movie and one which provides the foundation for great performances. Stiller, an actor whose bread and butter is playing characters who run the gauntlet of humiliation, brings a combination of weariness and enthusiasm to the role of Josh that works really well, and Watts is marvelous as Cornelia, delivering a performance so good that at times it's practically invisible. As their young counterparts, Seyfried is solid as Darby, who turns out to be arguably the story's most honest and insightful character, and Driver steals many of his scenes as Jamie, portraying him as the sort of person who lives every moment of his life as if performing it for the benefit of an audience and posterity. If nothing else, While We're Young is an actor's showcase and in that respect, at least, it's great.
Posted by Norma Desmond at 8:00 AM

Love Ben Stiller , great artist and this movie I am sure will relate to many people :)