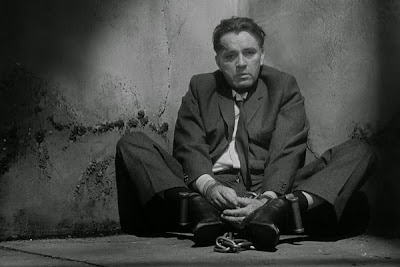 "What the hell do you think spies are?... They're just a bunch of seedy, squalid bastards like me, little men, drunkards, queers, hen-pecked husbands, civil servants playing cowboys and Indians to brighten their rotten little lives." I don't know that there are many popular writers with world views as consistently cynical and hard-edged as John le Carre, whose stories so often turn on the worst in human behavior (much of it sanctioned and/or encouraged by government agencies) and the men whose spirits have been decimated by it. The Spy Who Came in from the Cold is no different, which makes it a somewhat hard movie to enjoy because it's so depressing that you don't necessarily want to watch it again, even though it's a very well made piece of work. Maybe the fact that you don't want to watch it again (or, at least, that you don't want to see it again for a while) is a sign of just how good it is and how effectively this adaptation tells the story.

The spy in question is Alec Leamas (Richard Burton), who is recalled to London from West Berlin after one of his operatives is gunned down by the Soviets. The official story is that Leamas has been demoted, however, this is just a ploy to make him seem like a prime target for defection in order to lure East German intelligence into a trap. Seemingly an aggrieved alcoholic in need of an infusion of cash, Leamas attracts the attention of communist agents, who suss out his willingness to sell British intelligent secrets, and he is eventually brought to East Germany, where he meets with a man named Fiedler (Oskar Werner). During the course of their meetings, Leamas makes it appear as though he has information that a German intelligence officer named Mundt has been acting as an informant, though that information is not quite as concrete as Fiedler would like. When Mundt (Peter van Eyck) arrives at the villa where the interviews are taking place and realizes what is going on, he has both Fiedler and Leamas arrested, but then is arrested himself on the basis of Leamas' information.

A tribunal is called to determine the validity of Leamas' claims about Mundt, during which Mundt's attorney begins dismantling Leamas' credibility. Things go completely sideways for Leamas when a surprise witness is brought into the tribunal: Nan Perry (Claire Bloom), an idealistic young communist who had entered into a relationship with Leamas after he was recalled to England as bait for East German intelligence. When Nan reluctantly reveals that, in Leamas' absence, she has been receiving financial assistance from British intelligence via George Smiley (Rupert Davies), Leamas' cover is completely blown. In the result Mundt is cleared of suspicion of wrongdoing, while Leamas and Nan are taken to cells, along with Fiedler, who is suspected of having been complicit in Leamas' attempt to frame Mundt. As he waits to be executed and believes that he has not only failed in his mission, but also failed Nan by bringing her into danger, Leamas learns that all is not exactly as it may seem and that his failure is merely success in disguise.

Adapted by Paul Dehn and Guy Trosper and directed by Martin Ritt, The Spy Who Came in from the Cold is a doggedly bleak film, one which begins with Leamas experiencing a great failure by watching his operative get gunned down right in front of him while he can do nothing but impotently stand there, and then progresses by beating him down a little bit further with every turn of the plot. When Leamas must act the part of the disaffected agent, it's not really an act at all. Whatever optimism he once had has curdled into disillusionment during the years that he has spent in the service, which is perhaps why he's so attracted to Nan. She has not seen and experienced the things that he has, so her worldview is still pure; she's what he isn't, what he maybe was a long time ago, and he's at once drawn to her naivete and repelled by it, eventually unleashing the ugly truth on her in an attempt to force her to see the world as he believes it to really be. This being a le Carre tale, the coming together of these two characters can only end in tragedy, but it's the sort of tragedy that almost feels like a blessing in the circumstances.

Burton, who was nominated for an Oscar for playing Leamas, delivers a great performance, one of weariness and simmering aggression always threatening to bubble over. He's a man who has been worn down by his experiences to the extent that he doesn't have much faith left in the world and essentially has nothing except the job and his confidence in his ability to do it. John le Carre stories feature a lot of protagonists like this (the most recent film version being Philip Seymour Hoffman's character in A Most Wanted Man), but Burton's take on Leamas doesn't feel at all derivative or over-familiar. Bloom is similarly good as the naive idealist Nan, particularly towards the end of the story when Nan gets a peek behind the curtain and realizes that things are not as straight forward as she would have liked to think. While the plot of the story is fairly intricate, Ritt allows the performances to lead the way and do a lot of the heavy lifting, which in turn allows the film to leave a deeper impression than some other Cold War era spy stories. The Spy Who Came in from the Cold is the sort of film that I suspect will grow in my estimation with time and further viewings, though on first viewing I found the film itself a little too cold to fully embrace.
Posted by Norma Desmond at 11:16 AM