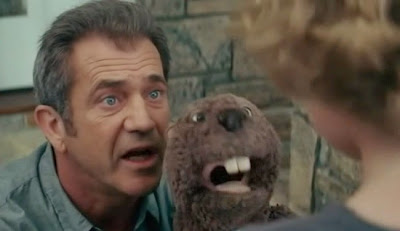 The premise of The Beaver was probably always going to be something of a tough sell. Although it's the story of a man who one day starts to live his life through a hand puppet, which sounds like the making of a comedy where wacky hijinks will ensue, The Beaver is actually a rather serious film about the crippling effects of depression on the person suffering from it and their loved ones. This isn't to say that making a hit out of a story like this couldn't be done, as after all two of star Mel Gibson's biggest movies are Lethal Weapon, in which his character is suicidal and reckless following the loss of his wife, and Signs, in which his character is barely functioning he's so weighted down with grief for his recently deceased wife. The difference is in the public's perception of Gibson by 2011, which ensured that rather than becoming even a modest, at-least-it-broke-even kind of hit, it instead became one of Gibson's lowest grossing films ever (only The Singing Detective and The Million Dollar Hotel have grossed less domestically). The Beaver is the sort of work that makes you question whether it's possible to separate the art from the artist because it's impossible to watch Gibson play this broken shell of a person without it being filtered through the lens of his very public personal implosion.

Gibson stars as Walter Black, the CEO of a failing toy company that was founded by his father, from whom he inherited both the job at the top of the company as well as a predisposition to depression. He's so far gone as the film opens that his wife, Meredith (Jodie Foster), has kicked him out of the house for the sake of their sons, Porter (Anton Yelchin) and Henry (Riley Thomas Stewart), and he's checked himself into a hotel where he intends to commit suicide. After an evening which culminates in two failed attempts to kill himself, Walter wakes up in the morning with a new personality expressed through a beaver hand puppet that he found in a dumpster the night before. The puppet becomes a permanent fixture on his hand, interacting with people because Walter himself cannot, which Meredith accepts because she believes it is a strategy suggested by Walter's psychiatrist, Henry accepts because he's a little kid and it doesn't seem weird to him, and Porter rejects because he already thinks his father is crazy. Of all the people in the family, Walter's situation is the most difficult for Porter, who is filled with anxiety that he has inherited personality traits from his father and struggles to suppress them. He keeps a list of the things that he has in common with his father so that he can try to change them, and when he's frustrated he has a habit of smashing his head against the wall of his bedroom, something he's done so frequently that not only is there a big dent in the wall, but it's so deep that it has nearly gone all the way through to the other side.

The Beaver is a film deeply concerned with the idea of identity. Walter has not just lost himself as the film opens, but he has lost himself by becoming his father, who also suffered from depression and ended his life with suicide. He saves himself, sort of and in the short term, by becoming "the Beaver," who is capable of saying everything that Walter himself is too emotionally crippled to say himself. Walter does not talk to people once the puppet is slipped onto his hand, but always speaks in the Australian-accented voice of the Beaver, letting himself slip further away as the puppet bridges the distance between him and other people. Porter is so scared of becoming his father (who is just like his father, who was just like his father) that he suppresses everything that reminds him of Walter and in the process smothers his own personality until he becomes a blank. At school he's the go to guy for anyone who needs to write a paper but doesn't have the skill to do it because, as he himself says, he's capable of successfully adopting anyone's voice. He can be anyone else because he's doing everything possible not to be himself.

Yet, as concerned as The Beaver is with the idea of identity, it doesn't really give any of its characters much of one. The characters get to have one trait which the film uses to define them. Walter is sad. Porter is angry. Henry is quiet (so quiet that he barely exists and Meredith has a habit of driving by him when she goes to school to pick him up). Meredith is fed up. They are defined just enough to be isolated from each other, lending the story an even greater sense of existential emptiness, but never enough that the mechanics of the plot stop seeming like exactly that. At the beginning of the film Walter has sunk so deeply into depression that Meredith asks him to leave, and all it takes for her to welcome him back is a puppet and an accent. She accepts his new form of "therapy" so easily and without hesitation that it completely undercuts the core of realism the film briefly achieves in its opening minutes, as it takes pains to establish the crushing weight of depression, and then never again regains. When Porter comes home to find Walter, and his puppet, welcomed back into the home, he asks Meredith if she's gone crazy and instantly becomes the film's voice of reason. Everyone, except Porter, accepts the Beaver immediately and without question, even the employees working for Walter at the toy company. Yet, at the same time, the film refuses to play this any way but straight. It is deeply serious about the man who lives his life through a puppet, but won't let its characters react to the puppet in anything even remotely resembling a realistic way. Even the moments in the film which on paper seem like they ought to be played for comedy, such as the montage of sex scenes between Walter, Meredith, and the puppet (images the world could have done without, unless you're a person who has always wanted to see Gibson and a Beaver puppet simultaneously make an "O" face), are instead used to demonstrate the benefits of the puppet and, in the particular case of this example, how it has revitalized the passion between Walter and Meredith. The Beaver doesn't just commit to its premise, it takes it so seriously that it goes beyond all possible reason, refusing to find comedy anywhere in its situation.

Despite these issues, at a different time The Beaver probably could have worked, but in 2011, after the ugliest aspects of Gibson's personality became too public to look past, it was a film doomed to failure. The Beaver is a story of redemption and conquering your demons, but after a decade during which Gibson's most lasting contributions to pop culture were public instances of drunken antisemitism, sexism, and racism, and with Gibson having taken a plea deal on a domestic violence charge mere months before The Beaver's release, audiences were not ready to see him as either redeemed or as having conquered his demons. Even in 2015 it's hard to see past all of that because the broken, empty nature of Walter as a character just fixes Gibson the performer in that time and place when all you seemed to hear about him was that he was once again acting like an awful, hateful person. Ironically, Gibson's performance in the film is one of his best as he embodies the desperate sadness and emotional paralysis of the character like a second skin. He is Walter, which is his achievement and the film's problem.

There is a lot of talent in The Beaver. Gibson, for all his problems, is great here, Foster brings a believable strength to her role as the rock of the family, even if she and Gibson are never able to sell the idea of their characters as a married couple (a shower scene between them and the puppet notwithstanding) and even if the character is barely developed, Yelchin is a fine actor who does what he can with the stereotypical role of the "angry young man," and a post-breakthrough role/pre-super stardom Jennifer Lawrence appears as Porter's girlfriend who has "issues" of her own which are ultimately as easily, and unbelievably, resolved as Walter's own. In different circumstances, these people could have come together to create a good movie. In 2010 they came together to create something that never rises above the status of a curiosity.

Should It Have Been A Blockbuster?: If it had come out in 2001 instead of 2011, it probably would have been, but that doesn't mean it should have been.
Posted by Norma Desmond at 8:00 AM