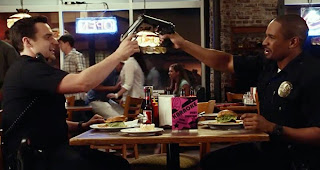 Yes, Netflix recommended it - and on the basis of my having watched The Interview, no less - but this one is really my own fault. As a fan of New Girl and of Jake Johnson and Damon Wayans Jr. in New Girl, I genuinely though there was a chance that I might enjoy Let's Be Cops at least a little bit, despite the scathing reviews the film inspired and despite the inherently queasy-making nature of its premise. Good, challenging movies can be made from transgressive premises - not in the case of Let's Be Cops, but in the case of other, better movies less content to cater to the lowest common denominator and more willing to make the effort to resist going for the easiest gag at every turn. I'd love to watch that movie; instead I watched this.

Johnson and Wayans star as Ryan and Justin, two friends from Ohio who have come to Los Angeles to make it, Justin as a video game designer and Ryan as... well, it's never really made clear what Ryan is aspiring to do. He's had a part in a commercial, but it was something he was randomly recruited for by a casting director and he isn't pursuing further acting opportunities; mostly his identity seems to be tied up in the fact that he was a star quarterback in college who failed to make it to the NFL as everyone expected him to. As the film opens, Justin reminds Ryan that they agreed that they would go back to Ohio if they hadn't made it by the time they turned 30, which has now come and gone. While Ryan remains optimistic that success is just around the corner, Justin is ready to pack it in and go back home, especially after his pitch for a police inspired video game called Patrolman is shot down in favor of a game involving firefighters and zombies. Things only begin looking up for our duo when they don police uniforms to attend what they believe to be a costume party and discover that people see them and actually think they're really cops.

While Justin is content to enjoy a single night of pretending to be a cop and abusing that power in minor ways, Ryan decides that he wants to turn it into a lifestyle. To that end, Ryan buys a used black and white patrol car off of EBay, puts lights on it and paints the LAPD insignia on the side. Though reluctant at first, Justin is talked into playing along some more and he and Ryan go about presenting themselves as police officers and taking on actual police work, which brings them into contact with an actual cop (Rob Riggle) who falls for their claim of being legit, as well as some Eastern European gangsters who have been hassling the store owners in Ryan and Justin's neighborhood. As they haphazardly continue to play at being cops (Justin does try to "retire" after finding out that pretending to be a police officer is a federal offense), they end up in way over their heads and with their lives seriously in danger unless the real police can bail them out before it's too late.

The problem with Let's Be Cops is that it is neither funny nor in any way very original. It's difficult, in the current political climate, to find much humor in a story about two guys who put on police uniforms in order to abuse the power that comes along with them, particularly when one of them is as mentally unstable as Ryan (Let's Be Cops is not a good movie, but I think it's possible for a good movie and even a funny, though very dark, comedy to be made using a character like Ryan, who has delusions of grandeur but only seems capable of gaining self-esteem by hurting others and making them subordinate to him, and showing how giving someone like him a uniform and a position of power is a recipe for disaster). What makes it even more difficult is that the film can't resist undercutting its own flimsy premise in order to provide cheap, easy laughs. The whole idea of the movie is that once Justin and Ryan put on the uniforms, they start getting the respect they believe they deserve, and yet throughout the movie people abuse and challenge them because of the uniforms. It shouldn't need to be said, but it can't be both - either the uniforms gain them respect, or they make people treat them with disrespect, and when it's continually the latter, that should eliminate the motivation for continuing to pretend to be cops.

With respect to the story's lack of originality, once it establishes its premise, it goes on to become a fairly cookie cutter buddy cop movie, with Johnson in the role of the crazy Riggs half of the partnership and Wayans in the role of the weary Murtaugh. While the actors have good chemistry together (though I question the wisdom of having an actor who can be as expressively comedic as Wayans underplay things as much as he does here in order to be the "serious" one), the characters are too underdeveloped to provide either actor with anything of substance to do (though they still get more to do than Nina Dobrev as the obligatory love interest whose name doesn't matter because the character doesn't matter). That Let's Be Cops still managed to put away a domestic gross of just under $100 million is baffling to me, but I suppose speaks to what a dead zone the end of August/beginning of September is at the box office. Let's Be Cops is the kind of movie you shouldn't even bother to have playing the background while you do other things, it's that bad.
Posted by Norma Desmond at 8:00 AM

Didn't totally hate it, but it definitely wasn't good.