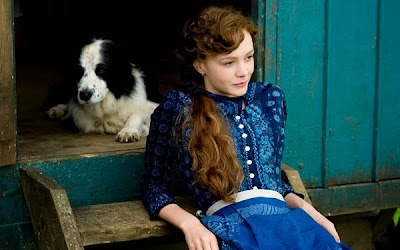 "It is my intention to astonish you all." The statement, made by the heroine of Far From the Madding Crowd is a bold one, particularly for a woman in the late 19th century, and it's one of several that she makes. While Thomas Hardy's best known characters are his tragic ones (Jude, Tess, the man known as the Mayor of Casterbridge), Bathsheba Everdene may very well be his best, a strong willed, independent minded woman who, through her willingness to pull up her bootstraps and get her hands dirty in order to get a job done, is sort of a precursor to Scarlett O'Hara. She's one of the great female characters in literature, and in Thomas Vinterberg's adaptation of Far From the Madding Crowd she is brought beautifully to life by Carey Mulligan. Even if the film itself doesn't rise to the level of nuance and perfection of that central performance, the performance is more than enough reason to check this one out.

Mulligan stars as Bathsheba, an independent and ambitious woman who becomes the mistress of a farm inherited from her uncle. Having installed herself as head of the household, Bathsheba immediately sets about proving that she's as capable of, and as invested in, running a property as any man could be and is determined to earn the admiration and respect of her staff and neighbors alike. Among her staff is Gabriel Oak (Matthias Schoenaerts), who once proposed to her before she came into her inheritance and before bad fortune resulted in the loss of his own plot of land, and among her neighbors is Mr. Boldwood (Michael Sheen), who treats her with cold indifference on the first few occasions when they come into contact with each other. More amused than insulted by Boldwood's insouciance, Bathsheba has a laugh by sending him a Valentine's Day card, not suspecting that by doing so she will stir the emotions which have been long repressed in Boldwood. After receiving the card, his heart is suddenly opened to her but when he proposes to her, she turns him down, just as she did Gabriel, explaining that she has no need for a husband and no interest in marriage, having already attained a degree of control over her fortunes and her future via the security that her inheritance offers.

Despite her self-sufficiency and her determination to maintain it, Bathsheba has barely turned down Boldwood's proposal before she meets Frank Troy (Tom Sturridge), a soldier of less than stellar reputation with whom she experiences a sexual awakening. She impulsively agrees to marry him and comes to regret it immediately as his vices, which include drinking and gambling, become known to her and as it becomes apparent that he has no intention of being a support to her in her running of the farm, but intends merely to use her income to fund his habits and present himself as a man of leisure. When he learns that Fanny Robin (Juno Temple), a former servant at the farm and the woman that he truly loves, did not leave him at the altar on their wedding day as he had been lead to believe and is pregnant with his child, Troy's mistreatment of Bathsheba intensifies as he treats her with physical roughness and sharp derision for all the ways that she isn't Fanny. When Fanny and her child die, and Troy is thought to be dead by having drowned, Boldwood renews his pursuit of Bathsheba and gains what he, in his growing obsession with her, believes to be her promise to marry him after a respectful amount of time has passed, while Gabriel, believing that his service to Bathsheba has now run its course, begins making plans to move on. However, one more tragic turn awaits before any of the three can realize the plans they've begun to make for themselves.

Far From the Madding Crowd is the type of film that is usually referred to as "handsome," meaning that its production elements are well manicured, its attitude is sedate, and it's innocuous as a work of art because it does nothing radical and everything that you would expect of a literary period piece. It's a backhanded compliment, yet even though I liked the film, I can think of no better way to describe it. Perhaps it's because it's a story all about restrained passion, from Bolwood, who has been so repressed for so long that when he finally does feel something for someone, it drives him mad; to Gabriel, who remains quietly devoted to Bathsheba even when he's given no hope that she might consider him; to Bathsheba herself who, in Mulligan's hands, is not coquettish but straightforward and practical, if sometimes a little bit too proud for her own good. Like Boldwood, when she gives in to feelings she's never allowed herself before it leads to ruin, and yet the film's most passionate scene is not the brief, literal love scene between Bathsheba and Troy, but the metaphorical one which occurs when Troy demonstrates his skill with a sword for Bathsheba. Because it's a film of such generally muted emotion, it's somewhat difficult to consider it anything particularly exceptional, even though the production and costume design are excellent, the cinematography by Charlotte Bruus Christensen is lush, and Mulligan's performance is among her best. However, despite all the things that come together wonderfully in Far From the Madding Crowd (the performances of Sheen and Schoenaerts among them), it feels like there's something missing in it which keeps it from being more than a movie that is simply "good."

Adaptations often have issues when it comes to things that need to be cut out in order to keep the film to a reasonable length and this film is no different. Lacking the novel's luxury when it comes to having the time to flesh out the characters and build tensions, Madding tells a story that feels rushed (particularly in the final act), with events happening so quickly one after another that the characters barely have time to become accustomed to their new circumstances before those circumstances have changed again. With the exception of the relationship between Bathsheba and Gabriel, which has the benefit of playing out over the entire course of the story, there's very little build up to the other storylines, which naturally blunts the emotional impact of how they play out. If you've read the novel, you're also likely to be disappointed with how the parts of the story dealing with Boldwood and Troy are streamlined to the point that much of the complexity has been lost. Moreover, Sturridge is so lacking in charisma in the role of Troy that Bathsheba becoming so beguiled by him doesn't really make a lot of sense, particularly when there's so much chemistry between Mulligan and Schoenaerts. Still, despite flaws, Far From the Madding Crowd is fine film and one which I would recommend on the strength of Mulligan's performance.
Posted by Norma Desmond at 8:00 AM