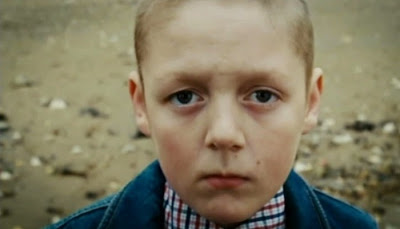 Shane Meadows This Is England is a film that succeeds in two thematic respects. First as a story about that in between stage of adolescence, when one is still young enough and underdeveloped enough to still be considered a kid, but emotionally attuned enough to be struggling with very adult issues; second as a story about how hatred is learned and created in a volatile space borne out of fear. It is an uncommonly intelligent and sensitive movie in both respects. In fact, so complete and fascinating is Meadows’ depiction of the milieu and its characters that This Is England has resulted in two sequel tv miniseries, with another one on the way. But it all starts here, with the story of a young misfit struggling to make sense of the world and find a place where he belongs, and taking the wrong fork in the road in the process.

This Is England takes place in 1983 and tells the story of Shaun (Thomas Turgoose), a 12-year-old suffering from the recent trauma of his father’s death in the Falklands War, in addition to the long-standing trauma of being bullied at school. Isolated and picked on by his peers, Shaun is an emotionally volatile young man when he meets Woody (Joe Gilgun), the leader of a gang of skinheads who decides to take Shaun under his wing. Woody and his gang are skinheads in the original sense, meaning that they aren’t affiliated with neo-Nazis and don’t espouse racist ideas – Milky (Andrew Shim), one of the members of the gang, is black – but rather are drawn to a specific style of fashion and musical taste. Shaun quickly finds his place with Woody and his friends and though his mother (Jo Hartley) is disconcerted when Shaun shows up at home one day with a shaved head, she’s ultimately grateful that at least he’s made some friends and finally seems to be happy.

Things begin to take a turn with the arrival of Combo (Stephen Graham), the former leader of the group who has just been released from prison and expects to step back into the role he left behind. The tensions between him and Woody are immediately apparent, rooted as much in their differing cultural views as in the fact that Woody is with Lol (Vicky McClure), the girl that Combo says he loves, and soon result in the group splitting into two factions. Half the gang goes with Woody, while the other half responds to Combo’s impassioned speech about the plight of “real” English citizens, the white men who are losing everything so that it can be handed to immigrants who don’t want to work for it. Combo’s assertion that Shaun’s father fought and died for England and, therefore, his death will be meaningless unless they can take back “their” country strikes a chord with Shaun, who falls easily and undiscerningly for Combo’s white supremacist rhetoric. Under Combo’s guidance, Shaun participates in acts of hate and violence and gets lost so far down the road that it may be too late for him to turn around and come back.

With stories like this there is always the danger that by exploring a vile point of view, it may inadvertently glorify it through the dramatization. The racist rhetoric will (hopefully) be abhorrent to most, but it’s also passionately expressed by an actor whose performance feels unfailingly authentic, and the risk is that while 9 viewers may hear it for what it is (the desperate rantings of a person afraid that they have nothing in the absence of their historical social privilege), there may be that 1 viewer for whom it makes absolute sense. This Is England sidesteps the problem by leaning into it, showing Combo not as villain with the potential to be embraced as an anti-hero, but as a deeply damaged human being whose anger and violence are an expression of the fear and loneliness and self-hatred at his core. At one point Combo states that he sees himself in Shaun, but what the film does is force us to see Shaun in Combo, to see in this violent man a scared little boy so lacking in social tools that the only way he can deal with his feelings of inadequacy is to turn it outward on someone else, to find a target and try to make them feel as small and helpless as he himself is. Combo is a character who would be easy to hate – in the end, all of the characters do as, one by one, he manages to alienate even those who’ve decided to follow him, and most end up going back to Woody – but he’s ultimately a character to be pitied in equal measure.

Meadows directs the film with an expert hand, making good use of the tension that arises from the story and being careful not to glamorize the violence (it’s key here that when violence does occur, the focus is less on the blood and gore than it is on the psychological and emotional effect of witnessing or inflicting it). While Shaun acts as the lens through which the story is told, this plays as the story of a group of people, most of whom have long and complicated histories together, and Meadows’ screenplay allows for the film to play with lots of different dynamics, which he weaves into the story with ease, giving dimension to the characters and their relationships. The success of the film in terms of how engaging it is has a lot to do with the strength of the acting ensemble, but like all successful coming-of-age stories, the key is in the casting of the main character. Turgoose, who had never acted prior to This Is England, inhabits his character like a second skin, demonstrating an incredible level of control and an ability to get straight to the heart of his character. It is a wonderful, often wrenching, performance in a film that is fully worthy of it.
Posted by Norma Desmond at 8:00 AM