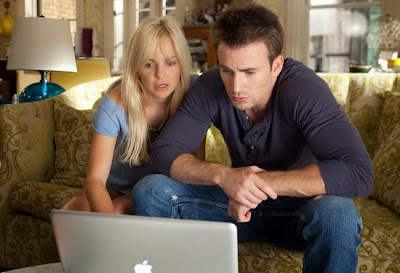 Based on my having watched This Means War, The Other Woman, and Brokeback Mountain, this time Netflix thought I might like What's Your Number?, a romantic comedy which has maybe a little bit in common with those first two films, and nothing at all in common with the third, unless you think that having a minor character who happens to be gay qualifies What's Your Number? to be compared to Ang Lee's Oscar winning masterpiece. I didn't really know a lot about What's Your Number? going into it (I vaguely remembered trailers for it from 2011) and picked it from among my recommendations because I was intrigued by the bizarre trio of films that made up Netflix's reasoning, and I have to say that it was surprisingly not terrible. It's not good by any stretch, and its premise is more than a little insulting, but it does have a certain degree of charm courtesy of its two stars.

Anna Faris, the Queen of movies that aren't equal to her talent, stars as Ally, a perpetually between boyfriends thirty-something living in Boston. As the film opens she's helping her younger sister, Daisy (Ari Graynor), get ready for her upcoming wedding, which causes her to reflect on her own unsuccessful dating history, particularly once she reads a women's magazine article which states that women who have had more than 20 sexual partners are essentially destined to end up alone, and then does counts out her own history and realizes that she's already up to number 19. When a drunken one-night stand pushes her to 20, she decides to embark on a quest to track down her exes and see if one of them was, perhaps, the "one" after all and will save her from a husbandless future. For some reason this becomes her main priority even though she has also just lost her job and is now living in an expensive city with no income. When tracking down her exes proves to be much harder than she had anticipated, she enlists the help of Colin (Chris Evans), her neighbor from across the hall who offers his assistance in exchange for her allowing him to use her apartment to hide in while he waits for his one-night stands to leave his place (it apparently never occurred to him that it might be easier for him to slip out of his date's place instead of bringing them back to his).

Colin begins finding the exes one by one, and Ally goes to check them out, growing increasingly dejected as she does so. There's the ex (Martin Freeman) who thinks that she's British and so she's forced to adopt an accent whenever she's with him, but being a few years out of practice at it she ends up slipping from "British" to "Borat" after a couple of drinks. There's the ex who is now a gynecologist (Thomas Lennon) and doesn't recognize her until he starts the exam. There's the ex who is now in politics (Anthony Mackie) and who seems promising when she first meets up with him again, but then reveals that he's gay and wants her to be his beard to further his political career. There are also exes that she has no interest in revisiting, including the puppeteer (Andy Samberg) to whom she lost her virginity (amazingly, after The Beaver this is now the second movie I've seen this month which features a love scene between a man, a woman, and a hand puppet), and the boyfriend she used to refer to as "Disgusting Donald" (Chris Pratt) who is now successful and attractive, but also engaged (and who, due to circumstances, she keeps getting the opportunity to embarrass herself in front of). The only ex she really wants to see is Jake (Dave Annable), a wealthy philanthropist who was her childhood sweetheart. Naturally, as she spends time with Colin tracking down these various men, she begins to develop feelings for him, but because this is a Hollywood movie that can't possibly be the end of the story and instead there has to be a needless layer of complication before we get to the inevitable resolution.

While the basic premise of the film is kind of gross and dumb (you know what's more likely to prevent you from living happily ever after than going beyond a randomly determined number of sexual partners? Spending all of your time obsessing over something that doesn't actually matter and creating pointless rules for yourself), the opening stretch of the movie is actually kind of winning based largely on the charisma and comic timing of Faris, and on Evans' relaxed chemistry with her. The two play off of each other well and the two characters actually make sense together and are allowed to develop a relationship as the story progresses that is semi-compelling, as far as romantic comedy relationships go. When the two characters get together (spoiler?) in a way that feels as organic as the film's premise will allow, I actually thought that What's Your Number? was going to end up being a better than average romantic comedy, but the film just can't take the win and walk away and instead throws in the most contrived and labored plot development possible. After developing a close friendship, Ally and Colin get together. Then she finds out that he's tracked down Jake, but didn't give her the information. When she confronts him, he states that he didn't think finding Jake would matter to her anymore since they've now gotten together, which is a completely reasonable point and Ally's reaction to it is utterly psychotic. The way that the film breaks Ally and Colin up so that it can get them back together for the finale is so lazy that it's insulting, and that's even after factoring in that, as a rule, you don't expect all that much from modern romantic comedies and yet it still manages to fall well short of that incredibly low bar.

Since the making of What's Your Number?, Faris' has stalled, with nary a leading role to be found, which is really a shame. What does work in What's Your Number? works largely because of her and because she's such a naturally funny and engaging presence on screen. I've never really understood why Faris hasn't become a bigger star, as to my mind she ought to have a career at least comparable to the one enjoyed by Goldie Hawn in the 1980s, but she's historically had difficulty finding decent projects and the decent projects she has found haven't necessarily sparked with audiences (seriously, though, The House Bunny is actually really funny; give it a look). The artistic failure of a film like What's Your Number? is in no way Faris' fault, as she gives her best even as the film decides that it's just going to flat out stop trying, but it's unfortunately not an outlier in her filmography. Some day, perhaps some enterprising filmmaker will craft a comedy that brings as much to the proceeding as Faris herself consistently does - fingers crossed.
Posted by Norma Desmond at 8:00 AM