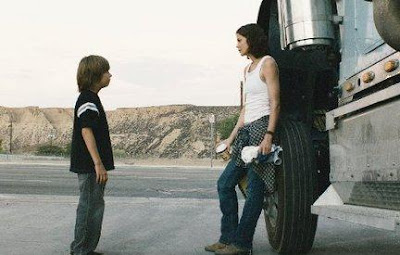 Trucker may take its story straight out of the big book of well-worn plots, but it manages to become a decent movie nevertheless. I've never thought much of Michelle Monaghan as an actress before, but her performance here definitely changes that. Without her performance, Trucker would probably be an instantly forgettable film, but her presence helps raise it to another level.

Monaghan stars as Diane Ford, a truck driving, hard drinking, hard living tough cookie. Her best friend is Runner (Nathan Fillion), a guy who is obviously interested in her even though he's married, which leads to a series of confrontations between Diane and Runner's brother-in-law, who is such a tough guy that he prefers to confront her about the situation instead of Runner. Diane's life is running along in a blur of work, one-night stands, and drinking until she learns that her ex-husband, Len (Benjamin Bratt), is in the hospital and needs her to look after their son, Peter (Jimmy Bennett), whom she hasn't seen since he was an infant. Diane tries her best to shirk the responsibility but eventually succumbs to the inevitability that, for the time being, she's going to have to take care of someone other than herself.

Things between Diane and Peter are less than peaceful. Peter is resentful for obvious reason and Diane is lacking in maternal instincts, so they spend as much time warring with each other as getting along. Eventually they do start to bond, though in the backs of both their minds is the knowledge that their time together is swiftly coming to an end. However, when Len's health takes a turn for the worse, Diane realizes that she's going to have to make a major overhaul of her life in order to accommodate Peter.

There's no twist in this plot that really can't be predicted. Even the fights between Peter and Diane are pretty predictable, but writer/director Peter Mottern provides the film with a gritty realism that helps it attain at least a small degree of freshness. Mostly, however, it's up to the actors to try to make you feel like this is something you haven't seen a thousand times before. Monaghan and Bennett, on whom this task falls more than anyone else, have a good rapport with each other and the progression of their relationship is believable and, at times, moving. As I said before, Monaghan's performance here is really exceptional. Diane is a difficult character because she's so unashamedly unpleasant most of the time and because she's unrepentant about the fact that she lives her life in a way that is either directly or indirectly considered "unladylike" by the general culture. Her insistence on living the way she wants to live regardless of what others think is easily one of the strongest things about the screenplay.

Problematically, the film abandons that strength in the final act in order to make the idea of Diane-as-mother more palatable because, of course, a woman who exists that contrary to social conventions can't possibly raise a child. This almost total turn-around in the character (which extends right down to the way she dresses) rings a bit false but to Monaghan's credit, she sells the hell out of it. I could have done without the film's climactic near-rape scene, but on the whole I think that Trucker is worth seeing despite its flaws.