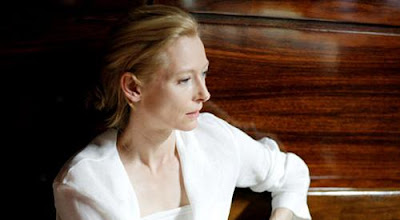 I figured I'd probably have to wait until it was on DVD to get to see I Am Love so it was a happy surprise for me when I saw that it was playing at one of the local theaters. I'm very glad I got to see this lush, beautiful film on the big screen and that Tilda Swinton continues to turn in excellent performances in such diverse, interesting films.

Swinton stars as Emma, Russian-born and now married into an Italian dynasty. As the story opens, the family is about to undergo a great shift: Emma's father-in-law Edoardo Sr. (Gabriele Ferzetti) is getting ready to retire from the family business and must chose his successor. Being apparently unfamiliar with King Lear, he decides to divide his kingdom between his son, Tancredi (Pippi Delbono) and grandson, Edoardo Jr. (Flavio Parenti), which results in predictable tensions between them. Edoardo Jr. takes to heart his grandfather's request that they preserve what he has built and keep it in the family, while Tancredi seems content to sell for a tidy profit. From a business perspective Tancredi's actions make sense, but from the perspective of the heart, it seems unthinkable. Edoardo Jr. occupies the unenviable position of trying to maintain things as they have always been while everyone around him sets about making changes which in and of themselves seem minor but taken together are shattering to his sensitive temperament.

The other development that will eventually rock Edoardo Jr.'s sense of place and self is Emma's affair with Antonio (Edoardo Gabbriellini), her son's friend and potential business partner. It is this part of the plot that really drives the story as it involves Emma's reconsideration of herself as a woman and of her place within her husband's family. The film's opening scenes show us a life that is very regimented, where everything is so formalized that it's taken as a matter of course. For example when Emma's daughter Elisabetta (Alba Rohrwacher) gives Edoardo Sr. a gift, he proudly announces to everyone at the party that it's a drawing, as she has given him a drawing every year. When he opens it he is dismayed to discover that it's a photograph. Elisabetta explains that this new medium has usurped her passion for the former and her grandfather admits that it's a nice photograph but that she still owes him a drawing. Tradition, for him, is valued above all else.

Elisabetta's break from tradition, rather than the affair with Antonio, is the thing that really sparks Emma's great revelation about herself, which I think is important. It isn't so much that she's awakened by this new man, but that she recognizes the possibilities that Elisabetta has opened up simply by charting her own course. It's not just her switching her interest from drawing to photography but also the revelation that she's in love with a woman that inspires Emma to take a chance of her own and re-imagine herself according to her own terms. Elisabetta's assertion of self is outwardly marked by cutting her hair, an act which Emma will mirror after she begins her affair with Antonio - both are metaphorically declaring their freedom from what they see as the oppressive force of the family's expectations. Another instance of mirroring occurs later, in scenes between Emma and Antonio and then Emma and Tancredi. In the scene with Antonio, he's shown undressing her from the shoes up. In the scene with Tancredi, he's shown covering her up, first placing her feet in the shoes she's taken off and then draping his jacket over her shoulders. When taken within the context of the story as a whole, the implication of these two scenes couldn't be more clear - Antonio represents freedom, Tancredi represents repression. When she reveals her affair to her husband, he dismissively states, "You don't exist" and it's true. Within her marriage she, as a person, does not exist but has instead been moulded into what he wants her to be. "Emma," she reveals to Antonio, isn't even her name, it's the name her husband chose for her when he brought her back from Russia.

Gracefully directed by Luca Guadagnino, I Am Love is a film that positively sings. It's the kind of film that openly aspires to be art with a capital "A," which I know some people can find off putting, but I think that it is unpretentious in its efforts to achieve its goal. Swinton delivers yet another great, interesting performance to add to her stable and it's amazing to think that the same woman who played the brittle, violent protagonist in last year's Julia could also be the woman appearing as quiet, delicate Emma. The film is probably too low-profile to net much awards attention for her or for itself, but both are certainly deserving.

Glad someone liked this as much as I did. It's a shame it's not getting more coverage.

Yeah, I think the ultra-limited release is really hurting it that way. Hopefully more people will find it once it gets out on DVD.